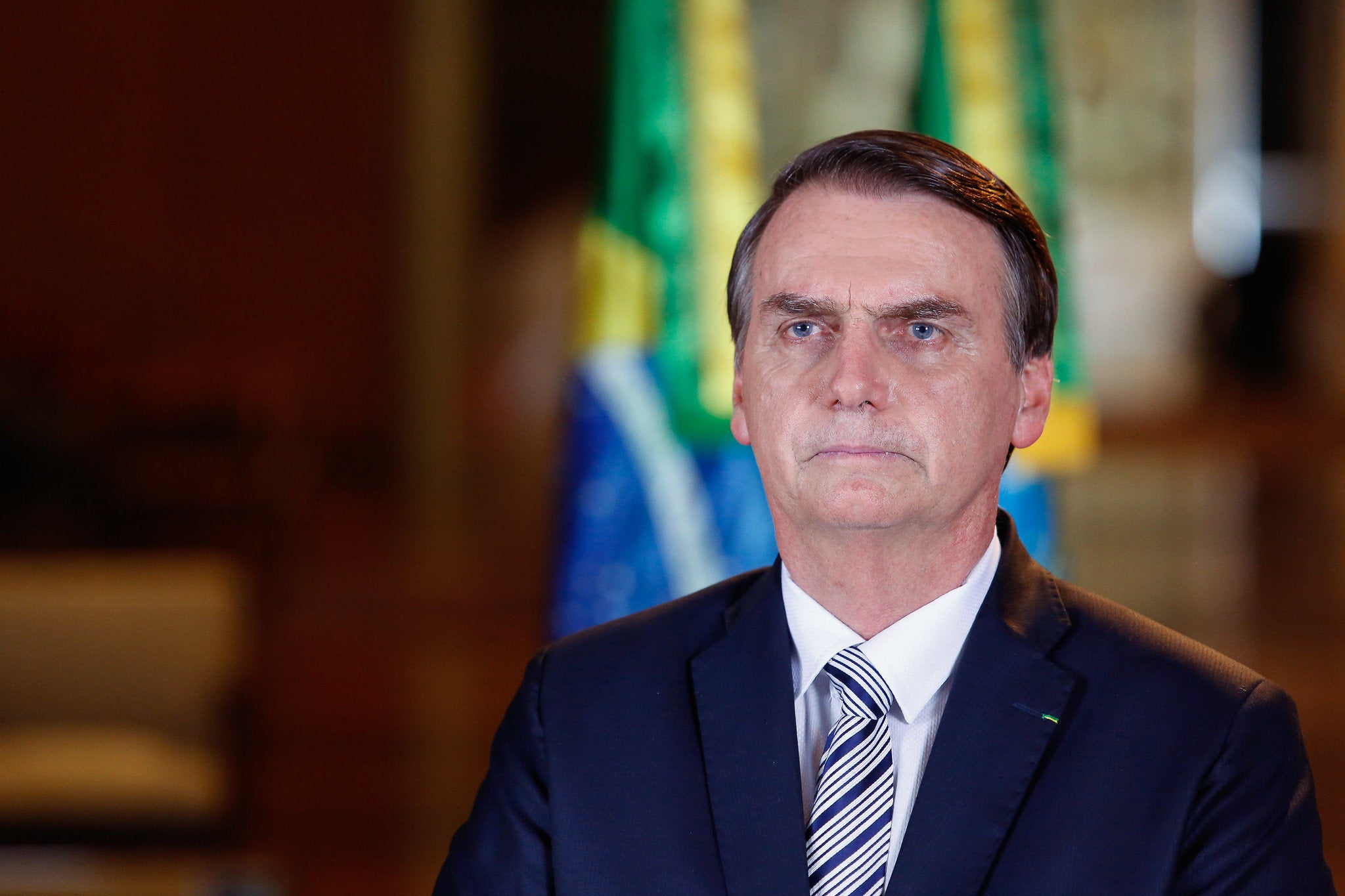 By Sue Branford and Thais Borges

With the ruralist lobby now in control of key sectors of the federal government, Brazil is rapidly approving new pesticides for use, some of which critics say are either unnecessary or excessively toxic. During the first 100 days of the Jair Bolsonaro administration, the Agriculture Ministry authorized the registration of 152 pesticides, putting Brazil on course to authorize more pesticides this year than in any previous year. Brazil is already the world’s largest user of pesticides. 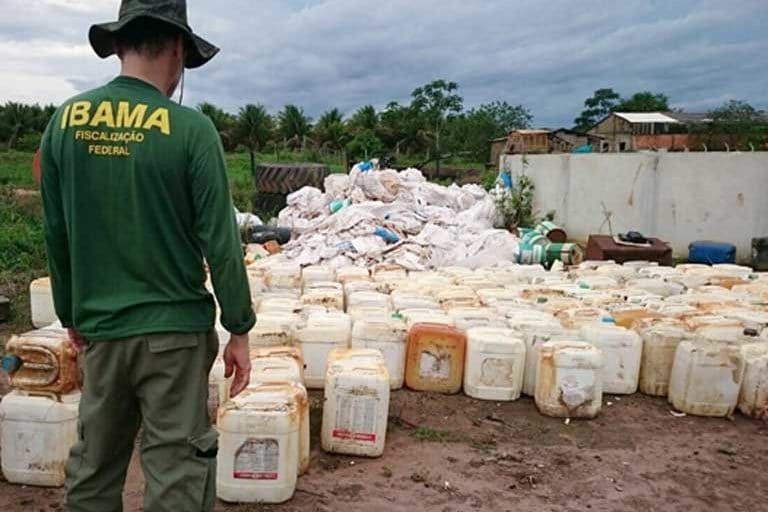 An employee from Brazilian Institute of the Environment and Renewable Natural Resources surveys a heap of emptied pesticide containers on a farm.

The number of pesticides authorized each year has risen rapidly, from 139 in 2015 under the Dilma Rousseff administration, to 450 in 2018 under the Michel Temer government (see graph). An even higher number is expected to enter the Brazilian market this year, as the Agriculture Ministry considers registration of roughly another 1,300 pesticides. Most of these requests are coming from foreign multinational companies, mainly based in the U.S., Germany and China, which is increasingly becoming an important supplier. 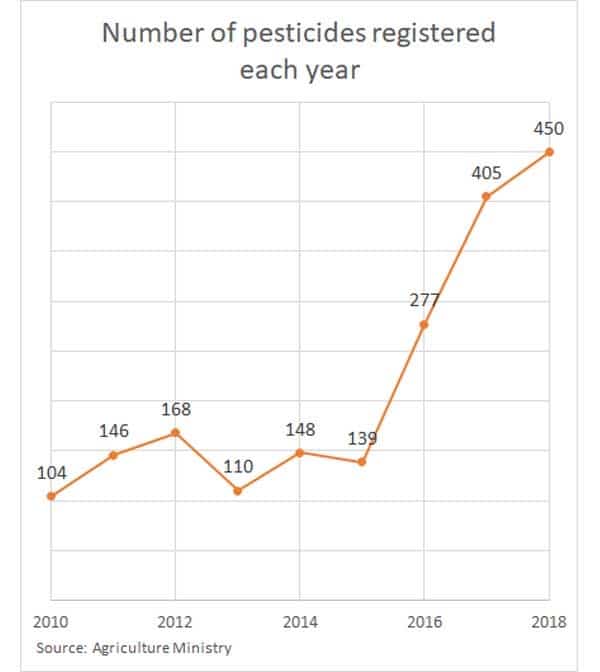 Despite the rapid rise in authorizations, Bolsonaro’s agriculture minister, Tereza Cristina, said “there is no general liberation” of new pesticide registrations. According to her ministry, the products will merely give farmers a greater choice of existing pesticides, and access to new chemicals and there is no reason to be concerned: “The use [of pesticides] is completely safe, provided they are applied as instructed, within a context of good farming practice and with the use of individual protective equipment,” said the government.

Events within Brazil seem to deny the truth of Cristina’s claims. Brazil has a higher per capita consumption of pesticides than any other country in the world — 7.3 liters per year per person — and it is already facing a serious problem with pesticide intoxication.

According to Guilherme Franco Netto, an Environment, Health and Sustainability Specialist at the Oswaldo Cruz Foundation, one of the world’s top public health research institutions, about 100,000 cases of intoxication are recorded in Brazil each year. According to Alan Tygel, from the Permanent Campaign Against Pesticides and for Life, this figure seriously underestimates the real situation, as many rural workers fail to report pesticide intoxications.

“Pesticides sprayed in large plantations intoxicate children in schoolrooms in many parts of Brazil,” said Richard Pearshouse, assistant director of the environmental and human rights division of Human Rights Watch. But the report found that many local inhabitants were too frightened to speak out.

In five of the seven impacted communities, people said they were afraid of suffering reprisals if they complained. In 2010 a rural farmer was shot dead after putting pressure on local government to forbid aerial spraying of pesticides — a common application practice in Brazil, even though it allows wind-carried toxic sprays to settle far from crops in surrounding communities and natural areas.

Many of the requests given the go-ahead this year are for new formulations of already authorized pesticides.”Once the initial manufacturer loses its patent, other companies start requesting registration so they can use the [same] active ingredients to produce new agricultural products,” said Murilo Souza, from the State University of Goiás.

Leonardo Melgarejo, vice-president of the Brazilian Association of Agroecology, believes that this practice is harmful as it will inevitably lead to a big increase in consumption nationwide. “We are approving several variations of the same pesticide,” he said. “We’re heading for a situation in which farmers will be able to ‘self-medicate,’ with two pesticide shops on every block.” Little research has been done to see how hundreds of various pesticides might interact to become more damaging.

The torrent of new approvals is also making it easier for Brazil’s farmers to gain access to toxic pesticides with which the global community has serious concern. One such case is that of 2,4-D, an active ingredient in controversial defoliant Agent Orange, used by the U.S. Army during the Vietnam War and whose use is increasingly being controlled in other countries, after the World Health Organization’s International Agency for Research on Cancer classified it in 2015 as “possibly carcinogenic to humans.” 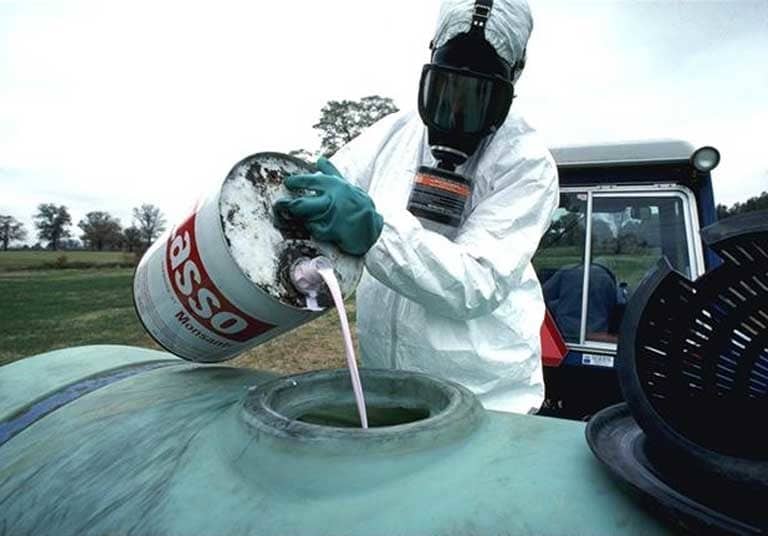 The latest wave of Agriculture Ministry authorizations seen on 10 April, gave the go-ahead to 31 products via an official federal decree — Act 24 — including three new formulations of 2,4-D requested by multinational pesticide makers and distributors. One request came from the Chinese company, Rainbow Defensivos Agrícolas, while the other two were initiated by Dow AgroSciences for formulations to be manufactured in South Africa and exported to Brazil.

These new Brazilian authorizations took place at a time when the Rio Grande do Sul Public Ministry, a group of independent public litigators, was carrying out an investigation into an allegation made by the Brazilian Wine Institute that last year the state lost almost a third of its grape harvest as a result of the aerial spraying of pesticides containing 2,4-D. Farmers spray this pesticide before they sow soy — also a time when grape, apple and olive trees are flowering, and when the spray can easily drift over neighboring farms.

“The data from our survey [that showed a loss of almost a third of the grape harvest] is a conservative figure, as it relied only on information spontaneously offered by farmers,” said Helio Marchioro of Brazilian Wine Institute. In fact, grape farmers themselves are calling for a 2,4-D ban, even as the Bolsonaro administration approves new 2,4-D formulations.

Several of the pesticides authorized this year will be entirely new to Brazil. Some have already been classified by Brazil’s National Health Surveillance Agency as “extremely toxic.” These include: mancozeb, a broad-spectrum fungicide used in agriculture and horticulture; the fungicide fluazinam; and the insecticide chlorpyrifos. In 2018 the Pest Management Regulatory Agency banned the use of mancozeb in Canada, except for foliar use on potatoes, due to “unacceptable risks to human health.” The U.S. Environmental Protection Agency (EPA) banned the use of chlorpyrifos in 2018 after its use had been associated with development disabilities in children.

One particularly controversial newly approved chemical is sulfoxaflor. This pesticide was one of several believed to have caused an outbreak in Brazil of colony collapse disorder — the catastrophic sudden disappearance of worker bees from a bee colony, leading to the death of hives. According to a survey carried out by Agência Pública and Repórter Brasil, half a billion bees were found dead in four Brazilian states in the first quarter of 2019 — a staggeringly large die off posing a threat to the pollination of fruits and vegetables and to native vegetation.

How @realDonaldTrump swampy @EPA has made a so-called "emergency" approval to spray @sulfoxaflor — an #insecticide #EPA's own scientists consider "Very highly TOXIC" to #bees — on more than 16 million acres of crops known to attract #bees: https://t.co/ytpgQhoKKv #neonicotinoid pic.twitter.com/tSCHMQeeYR

But at a press conference on April 9, Agriculture Minister Cristina seemed unaware that Brazil has already authorized sulfoxaflor. “The problem with the bees is that a product called sulfoxaflor was used. This [toxin] is not registered in Brazil,” she said. “It probably entered Brazil illegally and is being used incorrectly and thus caused the death of the bees.” In fact, sulfoxaflor was authorized at the end of last year by the Temer administration, though the official decree was only issued in January of this year under the Bolsonaro government.

Sulfoxaflor is classified by Brazil’s National Health Surveillance Agency as “averagely toxic,” but this evaluation is challenged abroad. Dow Chemical initially developed sulfoxaflor as a safer alternative to neonicotinoids, known to be harmful to bees. It was initially approved by the US EPA in 2013, a decision reversed in 2015 when studies found that sulfoxaflor was also dangerous to bees. Today sulfoxaflor can still be used in the U.S., but only in restricted circumstances.

Pesticide Deregulation in the Works

Environmental activist Alan Tygel believes that the rapid rise in the number of pesticide authorizations is directly linked to the growing power of the bancada ruralista agribusiness lobby in Congress. This lobby, he said, made its support for the impeachment of President Dilma Rousseff in 2016 dependent on government backing for pro-agribusiness measures. “From then on, the counterweight that came from progressive sectors, from family farming and from agroecology, was lost, and today the ruralist agenda faces fewer obstacles in its drive to have more pesticides approved and to push through more permissive laws,” Tygel said. The Bolsonaro presidential campaign greatly benefited from ruralist support, and it greatly helped sweep the former Army captain and legislator to victory last October.

The next goal of the ruralist agenda — more permissive laws — may well get a major boost this year with congressional approval of PL 6299/2002, dubbed as the “poison package” by critics. The legislation, which would greatly deregulate pesticides, was endorsed by a Chamber of Deputies commission in June 2018 and it now awaits plenary debate. The Temer government justified the bill, presented to Congress by then Agriculture Minister and dedicated ruralist, Blairo Maggi, claiming that the country desperately needed to simplify the complicated process of getting new pesticides authorized in order to help farmers.

But Castro Moreira, president of the prestigious Brazilian Society for the Progress of Science, representing more than 100 scientific societies, disagreed strongly. He said at the time that the bill, “could have very serious consequences for the health of the Brazilian population and the environment … Its approval would be a backward step, because it follows the logic of mechanized agriculture, with high investments in fertilizers and pesticides, which is an outmoded way of thinking, dating from the end of the Second World War.”

Current Agriculture Minister Cristina is a strong proponent of PL 6299/2002, but there is bound to be opposition to the bill’s approval, though it will likely be difficult for critics to block the measure. The ruralists have never had a stronger grip on both the legislative and executive branches, and they seem determined to press their agribusiness agenda.

As President Bolsonaro ended his first 100 days in office, his popularity was slipping fast, with 30 percent of the population already assessing his administration as “very bad” and the markets believing the government is becoming unstable. However, that very perception of growing uncertainty seems to have only caused the ruralists to move forward with greater urgency. Meanwhile, conservationists and food experts continue to warn of the national and global environmental and health repercussions of Brazil’s deregulated pesticide use — permissiveness likely to soon outstrip that seen among other major agricultural nations.