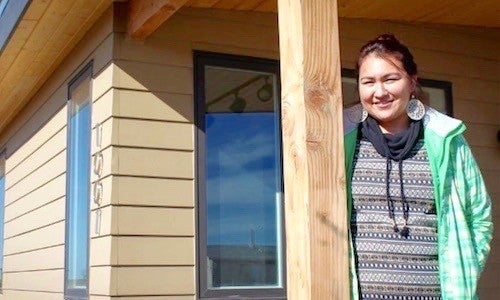 Make It Right, the nonprofit organization founded by actor Brad Pitt, has delivered the first five of 20 LEED Platinum, cradle to cradle-inspired homes to the Fort Peck reservation in Montana, home to the Sioux and the Assiniboine nations.

Five families have moved into their brand new, environmentally friendly abodes after the tribes and foundation kickstarted this much-needed housing project more than two years ago.

The first five families move into their #MakeItRight homes on the Fort Peck Indian Reservation this month. Stay tuned for more photos and stories. We’re so excited for you to meet them.

The reservation, with a population of 6,000, currently faces a dire housing shortage. About 600 people are in desperate need of housing, according to Make It Right. Overcrowding is also a problem; it’s not unusual for multiple families to squeeze together in the same house.

The Make It Right houses are reserved for seniors, disabled veterans and tribe members whose income levels are at or below 60 percent the area’s mean income. According to USA Today, there were 127 applications for the homes. Tenants were preselected through a lottery system.

These solar and geothermal powered homes come in several styles and have between 3 to 4 bedrooms and 2 to 3 bathrooms each. With these green building features, the homes are 75 percent more energy efficient compared to conventional homes, which translates to utility bills that are less than $60 a month even in the winter, USA Today reported.

Additionally, through a Low Income Housing Tax Credit Rent-to-Own program, the tenants will get to buy their homes after 15 years of renting.

In a recent blog post to celebrate November’s Native American Heritage Month, Make it Right shared the story of a Fort Peck resident named Melissa who moved into her new home with her two children, Zoey and Aiden, in the first week of November.

“It has changed us in big and small ways,” she said. “We now live much closer to my parents and extended family.”

Melissa is also paying much less for utilities, which used to cost her $160 a month or more.

“In our new solar-powered home, we will pay less than half of our old bill, even in the harsh Montana winter, even in a much bigger house,” she said. “I am using the savings to do more activities with Zoey and Aiden on the weekends.”

In 2013, Make It Right architects and designers spent four days meeting with tribe members before developing their designs. Tribe members explained that many homes in the area are rife with black mold and structural problems, resulting in high utility bills due to inefficient design.

USA Today reported that the homes cost around $235,000 each. The tribes are doing $2 million to $3 million in infrastructure work, including installing roads and sewer and water lines, said Deb Madison, a board member of the tribes’ company, Integrated Solutions.

21 of the Most Outrageously Cool Chicken Coops (Which Is Your Favorite?)