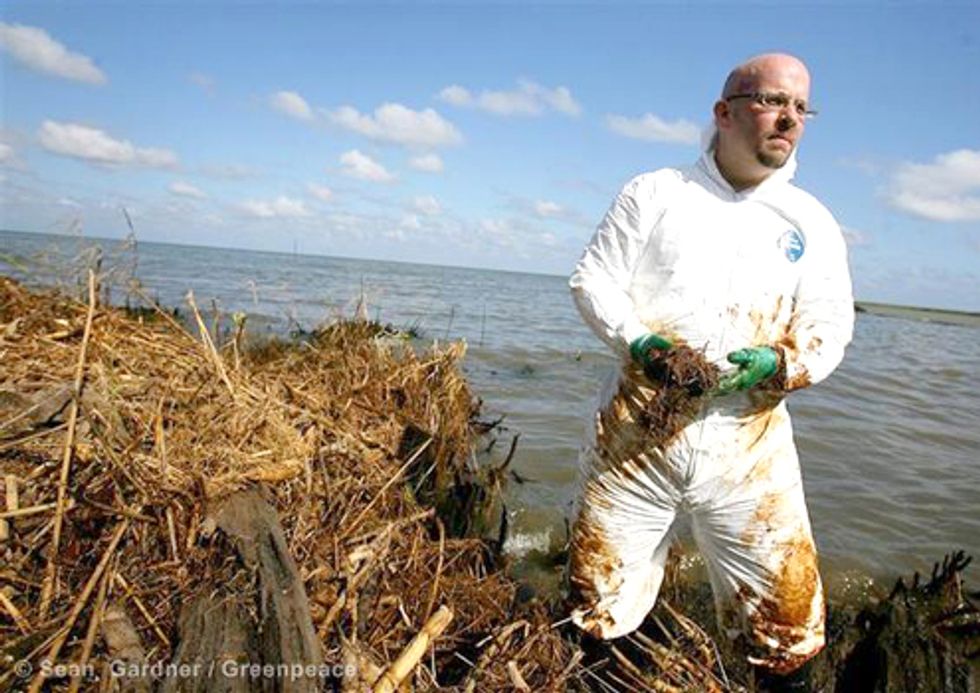 As we look back and assess where we are today, a troubling picture is emerging from the Gulf.

Throughout the foodchain, warning signs are accumulating. Dolphins are sick and dying. Important forage fish are plagued with gill and developmental damage. Deepwater species like snapper have been stricken with lesions, and their reefs are losing biodiversity. Coastal communities are struggling with changes to the fisheries they rely upon. Hard-hit oyster reefs aren't coming back and sport fish like speckled trout have disappeared from some of their traditional haunts. BP's oily fingerprints continue to mar the landscape and destroy habitats.

With these impacts already here, some scientists are alarmed by what they're finding. Unfortunately their concerns are largely drowned out by BP and the "powers that be" shouting through very large megaphones that "all is fine, BP is making it right, come and spend your money." But the truth is far different. The Gulf of Mexico, our nation's energy sacrifice zone, continues to suffer.

Of course, the Gulf wasn't a pristine ecosystem on April 19, 2010. The coastal wetlands of the Mississippi River delta were in a crisis state, losing a football field-worth of wetlands every hour due to our mismanagement of the river for flood control and dependable shipping lanes. This crisis has been greatly exacerbated by the oil industry being allowed to dredge 10,000 miles of canals through our coastal zone, removing marsh and increasing subsidence.

These wetlands are absolutely critical to our nation. Supplying $3 trillion annually to the U.S. economy, the Mississippi River and the Gulf coast create an international gateway for products like coffee, grain, seafood, oil and gas. The Gulf coast has historically been the cradle of nearly one-third of the commercial fish and shellfish harvest of the lower 48 states. Critical for migratory birds, the coast is used by up to 40 percent of North America's duck, geese, and eagle populations. Jazz, Funk, Zydeco, and Fats Domino were all born in southern Louisiana.

More importantly, Louisiana's natural storm defenses—such as barrier islands, marshes, and cypress swamps—protect Louisiana's coastal communities. Louisiana's infamous levees need wetlands to survive hurricane-level storms. But in the face of rising sea levels and stronger storms fueled by climate change, rebuilding these wetlands is the only way to make South Louisiana, and all it entails, sustainable.


With an estimated $50 billion price tag to re-engineer the lower reaches of the Mississippi River to reintroduce sediment and freshwater into the marsh to rebuild wetlands, this crisis demands a national commitment. In the face of rising seas, subsiding marsh, and increasing energy costs, coastal scientists estimate we have less than 10 years as a nation to begin the restoration process.

Here's the irony. Despite the horrors the BP disaster has brought to the region, it also presents a unique opportunity to jump start this $50 billion restoration project. BP will be on the hook for an historic fine under the Clean Water Act, as much as $17.6 billion depending on how aggressively and effectively the U.S. Department of Justice pursues the super-polluter. The oil industry (well, one very large corporate representative) might finally be forced to fix what they broke in our ecosystem. Congress is considering a bill that would devote 80 percent of the Clean Water Act fines would go to gulf restoration projects. Congress needs to pass this bill without holding it hostage to anti-environmental legislation.

It's well past time we hold BP accountable, demand better leadership from Washington, D.C., and take significant steps to restore the Gulf, and protect against all future drilling disasters. We hope you'll help. Two years later and misguided politicians are not doing what's needed to fix the Gulf nor are they changing the "energy as usual" policies that got us in trouble in the first place.

Greenpeace submitted nearly 50 Freedom of Information Act requests in the summer of 2010 during the BP Deepwater Horizon disaster for photos and information. These photos have never been released by the government. They were taken as the oil was hitting the coastline and, in many cases, in areas where the Coast Guard and BP were forbidding independent journalists or citizens from doing our own documentation by boat or air.

Greenpeace is still analyzing more than 20,000 images from the US Fish & Wildlife Service. Below is a map with a selection of 300 of never before seen images. Please comment and tag the photos where you can see oil, and birds or other signs of wildlife.