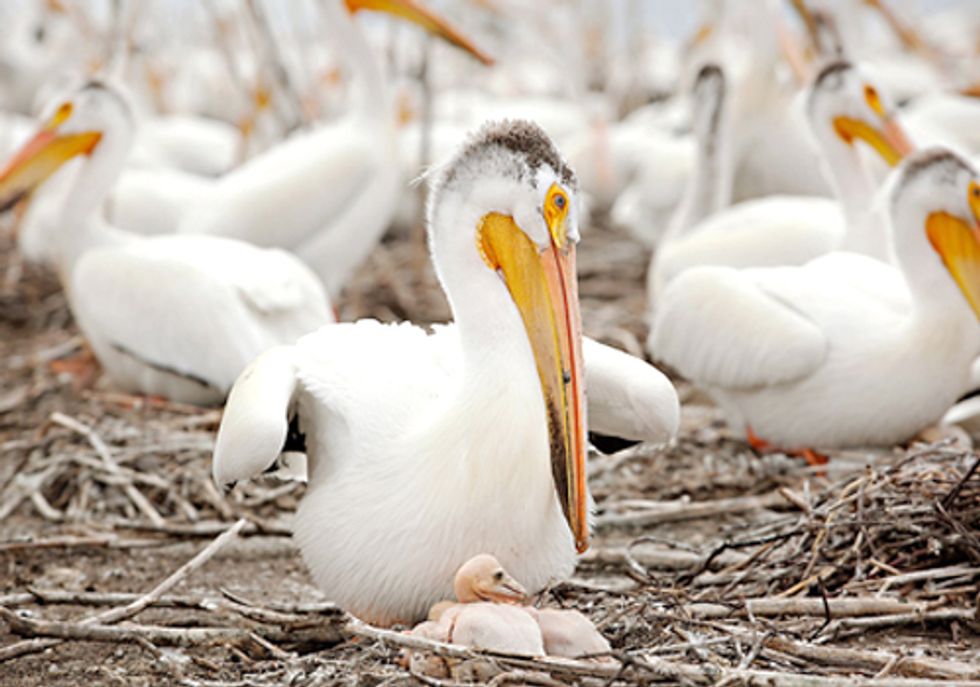 The impacts of the Deepwater Horizon are being felt in—you guessed it—Minnesota.

White pelicans that winter in the Gulf of Mexico and have lived in an oiled Gulf have migrated to far away places such as Minnesota to lay eggs, and the contaminants inside them have traveled as well.

Preliminary testing by the Minnesota Department of Natural Resources shows that petroleum compounds were present in 90 percent of the first batch of eggs tested and nearly 80 percent of the eggs contained the chemical dispersant used during the spill, called COREXIT.

The contamination of white pelican eggs is a bad sign for the developing embryos and potentially their populations. The researchers will be continuing to monitor impacts on the population for years to come, and the true impacts may not be realized for decades.

Mark Clark, a researcher helping with these studies, says, “Any contaminant that makes its way into the bird could be bad, but it could be especially bad if it gets into the egg because that's where the developing embryo and chick starts. And when things go wrong at that stage, there's usually no recovery."

The immediate loss of pelicans and other birds that were covered in oil during the spill was amazingly disheartening and graphic. But these types of sub-lethal impacts show how the next generation may be affected.

While these effects are less noticeable, they are even more concerning for the future of the population. Nearly half of all the bird species that live in the U.S. spend at least part of the winter in the Gulf of Mexico, and the health of the Gulf is globally significant for birds.

After the Exxon Valdez spill, more than 88 percent of the birds that were found dead were outside of Prince William Sound, the area immediately affected by the spill, and the number of dead birds found was only a fraction of the total killed by the spill.

The combination of those direct losses, poor reproductive success and changes in the habitat, has prevented some species from recovering, even 20 years later. Although we don’t yet know the long-term impacts of the Deepwater Horizon spill, these contaminants in eggs serve as a warning sign of things to come.

We need to make sure that BP and the other responsible parties are held accountable for the impacts of the Deepwater Horizon spill that have likely impacted hundreds to thousands of species.

Even more importantly we need to recognize that these contaminated eggs, and the ongoing damages to wildlife, are part of the overall problem with offshore drilling and spilling. We have much better options for energy, such as offshore wind, and we should use them.