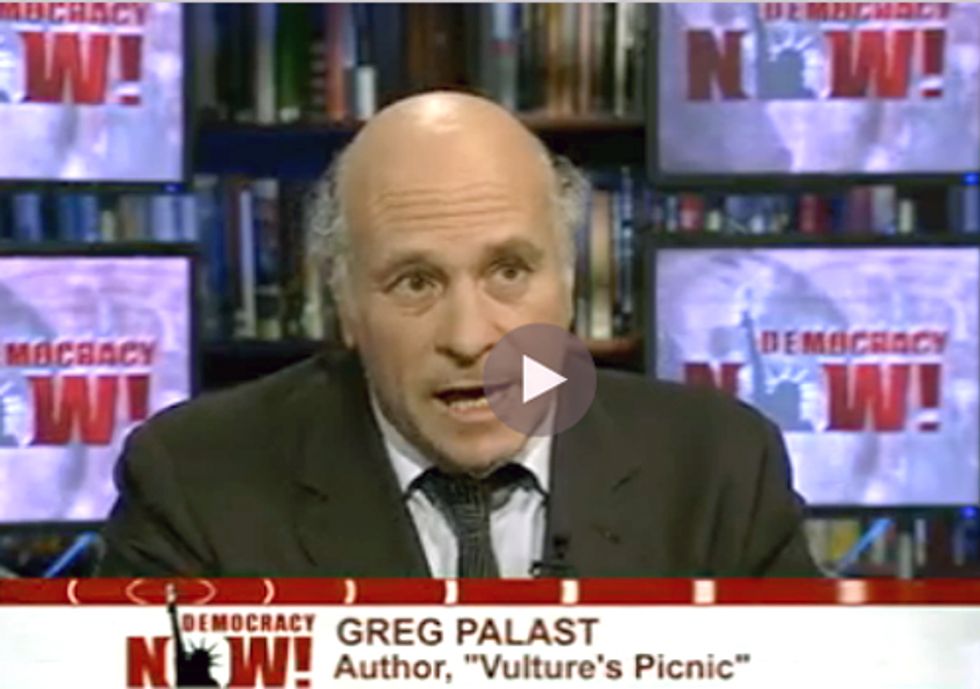 Some deal. BP gets the gold mine and the public gets the shaft.

On Friday night, the lawyers for 120,000 victims of the Deepwater Horizon blow-out cut a deal with oil company BP PLC which will save the oil giant billions of dollars. It will also save the company the threat of a trial that could expose the true and very ugly story of the Gulf of Mexico oil platform blow-out.

I have been to the Gulf and seen the damage—and the oil that BP says is gone. Miles of it.  As an economist who calculated damages for plaintiffs in the Exxon Valdez oil spill case, I can tell you right now that there is no way, no how, that the $7.8 billion BP says it will spend on this settlement will cover that damage, the lost incomes, homes, businesses and boats, let alone the lost lives—from cancers, fetal deformities, miscarriages, and lung and skin diseases.

Two years ago, President Barack Obama forced BP to set aside at least $20 billion for the oil spill's victims. This week's settlement will add exactly ZERO to that fund. Indeed, BP is crowing that, adding in the sums already paid out, the company will still have spent less than the amount committed to the Obama fund.

There's so much corrosion, mendacity and evil covered up by this settlement deal that I hardly know where to begin.

So, let's start with punitive damages.

I was stunned that there is no provision, as was expected, for a punishment fee to by paid by BP for it's willful negligence. In the Exxon Valdez trial, a jury awarded us $5 billion in punitives—and BP's action, and the damage caused in the Gulf, is far, far worse.

BP now has to pay no more than proven damages. It's like telling a bank robber, "Hey, just put back the money in the vault and all's forgiven."

This case screamed for punitive damages. Here's just a couple of facts that should have been presented to a jury:

For example, the only reason six hundred miles of Gulf coastline has been slimed by oil was that BP failed to have emergency oil spill containment equipment ready to roll when the Deepwater Horizon blew out. BP had promised the equipment's readiness in writing and under oath.

And here's the sick, sick part. This is exactly the same thing BP did in the Exxon Valdez case. It was BP, not Exxon, that was responsible for stopping the spread of oil in Alaska in 1989. In Alaska, decades ago, BP told federal regulators it would have oil spill "boom" (the rubber that corrals the spreading stuff) ready to roll out if a tanker hit. When the Exxon Valdez struck Bligh Reef, BP's promised equipment wasn't there: BP had lied.

And in 2010, BP did it again. Instead of getting the oil contained in five hours as promised as a condition of drilling, it took five days to get the equipment in place (and that was done by the US Navy on orders of the President).

This was more than negligence: it was fraud, and by a repeat offender. Now BP is laughing all the way to the bank.

And there's more. BP mixed nitrogen into the cement which capped the well-head below the Deepwater Horizon. BP claimed to be shocked and horrified when the cement failed, releasing methane gas that blew apart the rig. BP accused the cement's seller, Halliburton, of hiding the fact that this "quick-set" cement can blow out in deep water.

But, in an investigation that took me to Central Asia, I discovered that BP knew the quick-set cement could fail - because it had failed already in an earlier blow-out which BP covered up with the help of an Asian dictatorship.

The lack of promised equipment, the prior blow-out—it all could have, should have, come out in trial.

Think about it: BP knew the cement could fail but continued to use it to save money. Over time, the savings to BP of its life-threatening methods added up to billions of dollars worldwide. BP will get to keep that savings bought at the cost of eleven men's lives.

Other investigators have uncovered more penny-pinching, life-threatening failures by BP and its drilling buck-buddies, Halliburton and TransOcean. These include bogus "blow-out preventers" and a managerial system that could be called, "We-Don't-Care Chaos."

BP partners and contractors will have to pay $5.4 billion as part of the deal—and BP, not the victims, will keep the entire $5.4 billion. If TransOcean and Halliburton follow suit, BP could walk without paying another dime to victims.

BP had no choice but to pay proven damages and conceded as much. I have learned from inside the plaintiffs' legal team that this judge was just not going to allow punitive damages; and the Bush-burdened US Supreme Court is just as hostile. (The Supremes cut the Exxon Valdez punitive award by 90 percent.)

So BP walks without the civil punishment that tort law should provide and justice demands, grinning and ready to do it again: drill on the cheap with the price paid by its workers and the public.

But stopping a trial denies the public more than the full payment due: it denies us the truth, the whole truth and nothing but the truth. There are 72 million pages of evidence from inside BP and industry files obtained by legal discovery in the case which are now likely to follow the rig to the bottom of the sea.

That's not good. We need the real story.

The lawyers for plaintiffs got all they could get for their clients given the rightward march of the law. Also, there is no doubt that the control of the “$20-billion” spill fund by Kenneth Feinberg, known here in New York as “The Reptile,” the back room choice of Obama and BP, shafted victims by the thousands. Getting the Fund out of his saurian hands is probably the best part of the settlement deal.

But we need to widen the idea of “victim” to beyond those measurably harmed individuals. We are all BP’s victims: because of BP’s and the industry’s addiction to safety fakery from Alaska to the Caspian.

The President has just opened up the arctic waters of Alaska for drilling, has reopened the Gulf to deepwater platforms, and is fiddling with the idea of allowing the XL Pipeline to slice America in half.

So we need to know: Can we trust this industry?

The states of Louisiana and Mississippi could still haul BP into court. Fageddaboudit: neither Louisiana's Governor Bobby Jindal nor Mississippi's Phil Bryant, both of the Grand Oil Party, will expose BP. The Obama Administration must be pushed to bring the case to trail in the public interest. Though the history of federal complicity and Obama's fear of looking like a whale-hugging drill buster suggests a sell-out is in the offing.

Without a trial in the Deepwater Horizon case, we may never get the answer, never get the full story of the prior blow-outs, the fakery in the spill response system, and other profits-first kill-later trickery that bloats the bottom line of BP and the entire drill-baby-drill industry.

For more on Palast's worldwide investigation of BP and the industry in Central Asia, the Gulf, Alaska and the Amazon, read Palast's new book, Vultures' Picnic: In Pursuit of Petroleum Pigs, Power Pirates and High-Finance Carnivores at www.VulturesPicnic.org.