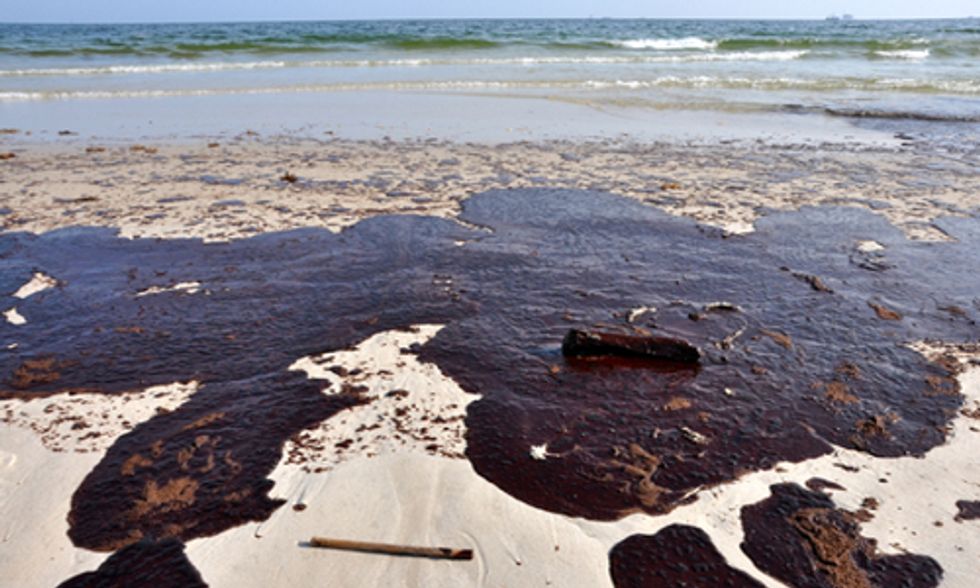 The aftereffects of the April 20, 2010 explosion of the Deepwater Horizon in the Gulf of Mexico and the subsequent massive oil spill that gushed for three months go on and on and on—in the lives of  Gulf-area residents and businesses, the legal offices of BP and its contractors, and in the courts.

A new study suggests that the impact of the 2010 Gulf of Mexico oil spill could be more far-reaching than previously thought.
Photo credit: Shutterstock

A new study reveals that the disaster, which BP claims has been cleaned up and its impacts exaggerated, left a deposit of oil the size of Rhode Island on the ocean floor.

Researchers from the University of California, Santa Barbara, University of California, Irvine, and Woods Hole (Massachusetts) Oceanographic Institution, led by geochemistry professor Dave Valentine from UCI, have published a study Fallout Plume of Submerged Oil from Deepwater Horizon. Analyzing sea sediment, they discovered what they referred to as a "bathtub ring," saying it "formed from an oil-rich layer of water impinging laterally upon the continental slope (at a depth of 900 - 1,300 m) and a higher-flux 'fallout plume' where suspended oil particles sank to underlying sediment."

"Following the sinking of the Deepwater Horizon in the Gulf of Mexico, an unprecedented quantity of oil irrupted into the ocean at a depth of 1.5 km," the study said. "The novelty of this event makes the oil’s subsequent fate in the deep ocean difficult to predict. This work identifies a fallout plume of hydrocarbons from the Macondo Well contaminating the ocean floor over an area of 3,200 km. Our analysis suggests the oil initially was suspended in deep waters and then settled to the underlying sea floor. The spatial distribution of contamination implicates accelerated settling as an important fate for suspended oil, supports a patchwork mosaic model of oil deposition and frames ongoing attempts to determine the event’s impact on deep-ocean ecology."

The official government estimates said that about 5 million barrels of oil were released into the ocean in what the study refers to as an "uncontrolled emission."

"Among the pressing uncertainties surrounding this event is the fate of 2 million barrels of submerged oil thought to have been trapped in deep-ocean intrusion layers at depths of 1,000 - 1,300 m," says the study.

In September, a federal court in Louisiana found that BP's "willful misconduct" and "gross negligence" caused the spill. That finding could expose BP to fines of up to $18 billion, well beyond the 2012 $9.2 billion settlement it reached with mostly non-governmental plaintiffs.

BP issued a statement saying the study was overblown. "The authors failed to identify the source of the oil, leading them to grossly overstate the amount of residual Macondo oil on the sea floor and the geographic area in which it is found," a BP spokesman told AP.

But Valentine and his team suggested the impact could be even more far-reaching. "We also suggest that a significant quantity of oil was deposited on the ocean floor outside this area but so far has evaded detection because of its heterogeneous spatial distribution," the study said.