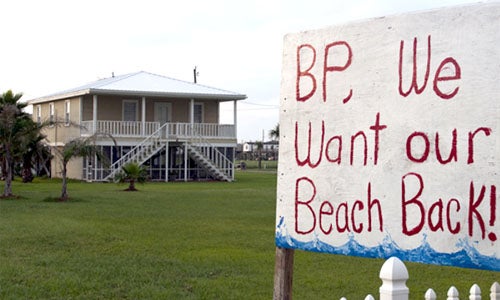 Today a federal judge in New Orleans found BP guilty of “gross negligence” and “willful misconduct” in the April 20, 2010 explosion of an oil rig in the Gulf of Mexico. The oil spill that resulted from the explosion of the Deepwater Horizon rig was the largest in U.S. history, spewing oil for more than three months. It killed 11 people and continues to have environmental impacts to this day on beaches, wetlands, wildlife, fisheries and a host of businesses in five states. 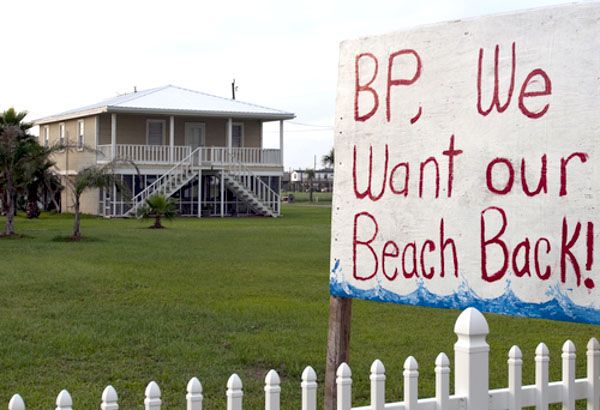 A sign on the home of a front lawn in Grand Isle, Louisiana on the Gulf Coast.

According to Bloomberg, BP could face a fine as high as $18 billion. Plaintiffs included the federal government, the five Gulf of Mexico states of Texas, Louisiana, Mississippi, Alabama and Florida, banks, restaurants and fishermen, among others.

This comes on the heels of the news Tuesday that Halliburton, contracted by BP to cement the oil well, had reached a $1.1 settlement with the businesses, citizens and governments impacted by the spill. But Halliburton was a bit player in BP’s disaster scenario.

During the trial, the companies all tried to shift the blame.

“BP said at trial that Transocean failed to maintain the drilling rig and Halliburton provided defective cementing services,” says Bloomberg. “Transocean and Halliburton pointed their fingers back at BP. BP denied it was grossly negligent while accepting blame for errors that caused the spill. … Lawyers for Transocean, Halliburton and plaintiffs claimed in the second phase that BP delayed the capping of the well by misrepresenting the size of the spill, as well as prospects for containing it. The spill victims also alleged that BP wasn’t prepared for a deep-water blowout.”

The difference between a finding of “negligence” and “recklessness” is significant, possibly exposing BP to claims beyond the 2012 $9.2 billion settlement it reached with most non-governmental plaintiffs. It’s still to be determined how much oil was spilled.

Naturally, BP disagrees with the decision and says it will appeal.

It said in a statement, “BP believes that the finding that it was grossly negligent with respect to the accident and that its activities at the Macondo well amounted to willful misconduct is not supported by the evidence at trial. The law is clear that proving gross negligence is a very high bar that was not met in this case.”