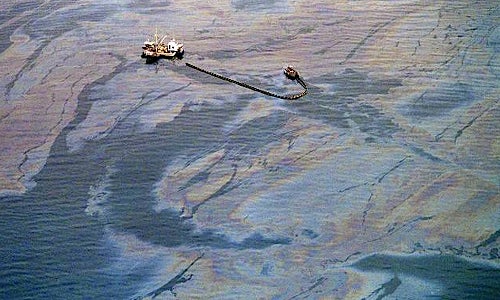 The first and second phases of the BP trial involving the Deepwater Horizon oil disaster are behind us. The judge is now deciding how to rule on the issues of gross negligence and amount of oil released into the ocean, while a third and final phase is set for Jan. 2015. Yet, while the end of the courtroom drama is in sight, the genie BP let out of the bottle almost four years ago has not gone away, and questions abound. For example, how is lingering oil affecting the food web? Which impacts will remain hidden? And how long will recovery of the environment take? Answers to these questions are frustratingly elusive, especially since the results of government studies assessing environmental damage are still mostly confidential. 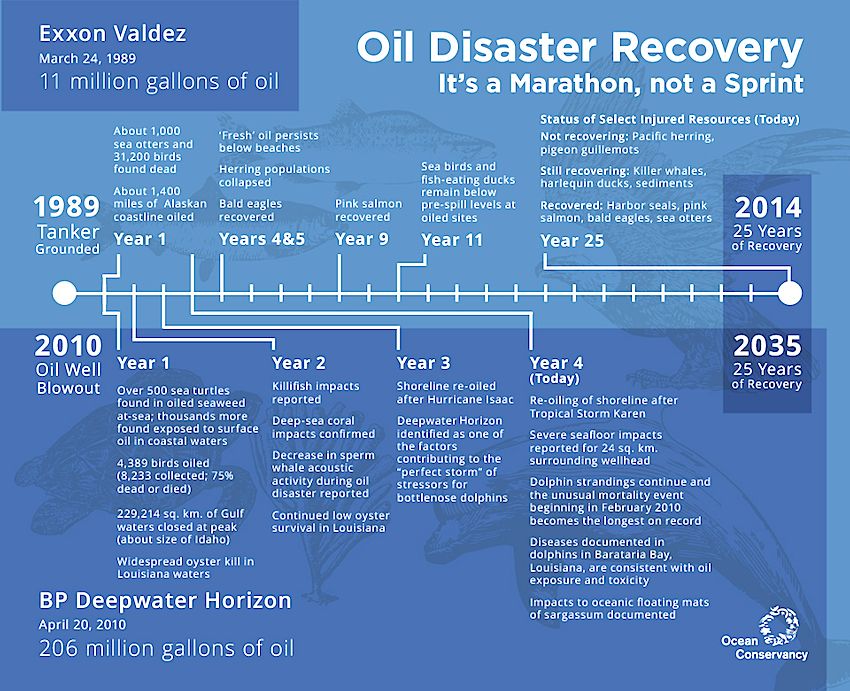 With the fourth anniversary of the BP disaster nearly upon us, we can look back to the March 1989 Exxon Valdez oil spill in Alaska for insight into the types of impacts seen four years after that oil spill and what they might mean for Gulf recovery. As Alaskans reach a significant milestone today—the 25th anniversary of the Exxon Valdez disaster—the successes and setbacks in coastal Alaska’s recovery are instructive. These insights put the Gulf’s recovery into perspective and tell us that science is the foundation of a decades-long restoration effort, and it must not be shortchanged.

Four years after the tanker Exxon Valdez belched 11 million gallons of oil into Prince William Sound, the water’s surface was largely oil-free. However, patches of asphalt-like deposits remained on area beaches and pockets of relatively “fresh” oil could be found below the surface. Residual BP oil persists, embedded in marshes, beaches and offshore sediments. When disturbed, as was the case following Tropical Storm Karen, it re-oils sensitive habitats. Lingering oil poses risks to the species and can slow recovery, either through direct re-exposure or indirectly through ingestion of contaminated prey. To this day, lingering Exxon Valdez oil is monitored on sheltered beaches in the Gulf of Alaska. The Gulf of Mexico needs a similar long-term monitoring effort to track remaining reservoirs of submerged BP oil and its food web impacts. 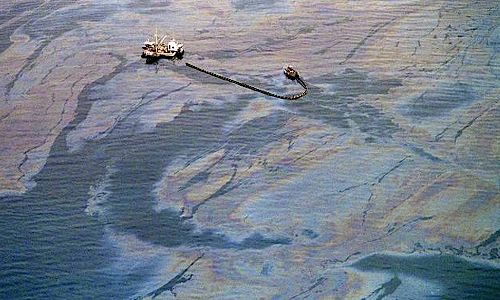 Salmon are the most important finfish, culturally and commercially, to Alaskans. Oil from the Exxon Valdez reached about one-third of pink salmon streams in Prince William Sound. Repeated exposure of fish eggs to relatively less toxic oil slowed the recovery of pink salmon, which was not declared recovered until 1998. Another species, Pacific herring, which once supported a multimillion-dollar fishery in Prince William Sound, was another casualty of Exxon Valdez oil. In 1993, the Prince William Sound herring population crashed, the result of a perfect storm of natural and man-made factors, including Exxon Valdez oil. More than 20 years later, Pacific herring still has not recovered and is the focus of ongoing studies.

In the Gulf of Mexico, fisheries are a $5.7 billion industry. Much is still unknown about the impacts of the BP disaster on finfish or what ripple effects these might have in the ecosystem or fisheries, but new research findings give us a glimpse. Scientists found that when young bluefin tuna were exposed to crude oil from BP’s ruptured wellhead, their hearts were at greater risk of malfunctioning. The BP disaster occurred at the time bluefin were spawning, so it is possible the 2010 class took a hit. Menhaden is also a significant wild card because it is so critical to the Gulf food web. The distribution of this forage fish overlapped with the BP oil spill footprint, but scientists don’t yet know—or aren’t saying—to what degree the species was affected.

Now is the time to model best and worst case oil spill impact scenarios for finfish species of concern, like bluefin or menhaden, using the results to guide recovery strategies and help fishermen plan ahead. Long-term studies for exposed finfish similar to those for Pacific herring in Alaska are also needed. 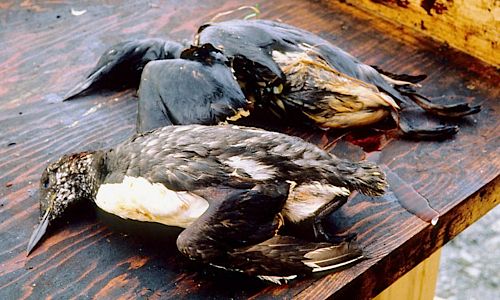 Wildlife was severely affected by the 11 million gallons of oil that spilled from the tanker 25 years ago. Photo credit: Wikimedia Commons

An estimated 250,000 birds were killed by the Exxon Valdez disaster. Several populations of birds, including bald eagles, had recovered by 1994, but many of those in oiled areas had not. Harbor seals may have declined by as much as 300 individuals following the disaster, continuing a declining trend first observed in 1984. Two pods of killer whales occurring in waters exposed to Exxon Valdez oil lost a combined 22 animals between 1989 and 1994, and neither pod had recovered by 1994. Many of these species have been the focus of oil spill impact studies dating back to 1989, with surveys continuing today because populations have not fully recovered.

In the Gulf of Mexico, thousands of birds representing about 100 species were recovered from the BP disaster impact area. In actuality, the total number is likely many times higher because carcasses are eaten, sink or drift away. Since the disaster, hundreds of sea turtles and bottlenose dolphins have stranded. The dolphin die-off is the longest and worst ever seen in the Gulf. We need to get to the bottom of dolphin deaths to not only arrest the trend if we can and aid their recovery, but also to determine whether conditions for dolphins in the Gulf are changing and why. Scientists need to collect data over many years in order to detect trends and understand ecological relationships. For this reason, long-term health assessments for wildlife species impacted by the BP disaster are high priorities for restoration and gauging recovery.

Recovery Is a Marathon, Not a Sprint

The Exxon Valdez experience taught us that recovery from oil spills can be two steps forward and one step back. Oil spill restoration is like a marathon; the process is long and pacing matters. The best way to prepare for the long haul and make periodic course corrections is to learn as much about oil spill impacts and ecosystem drivers as solid science will tell us, and respond accordingly. Tracking the health of an ever-changing Gulf is as important for restoration as regular checkups are for people, even more so for those recovering from an illness. Without a finger on the Gulf’s pulse and understanding how changes in this body of water affect recovering species, the right diagnosis or decisions about this or that species cannot be made. We need dedicated Gulf-wide monitoring for a minimum of 25 years to track recovery from the BP disaster. If there is one lesson we have learned from the Exxon Valdez disaster, it is that good science is the glove that fits around the hand of restoration.