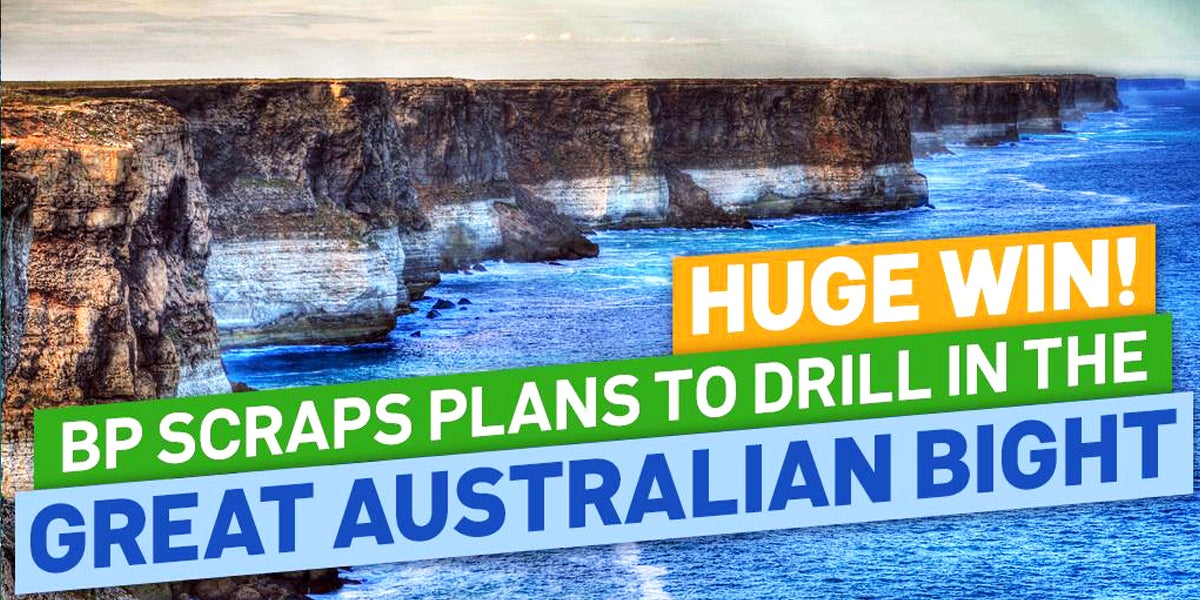 Conservationists and environmentalists in Australia are celebrating a major victory after the oil giant BP announced that it is abandoning its hugely controversial plans to drill for oil and gas in the Great Australian Bight.

The area, which is off the country’s southern coast, is a marine park and home to one of the largest breeding populations of endangered southern right whales in the world.

BP had big plans for the Bight and had once boasted that the region could be as important to the oil industry as the Gulf of Mexico.

But BP had also been struggling to persuade Australia’s regulator, National Offshore Petroleum Safety and Environmental Management Authority, Nopsema, that it could safely drill in the highly ecologically sensitive region.

Three times the regulator has knocked back the company, the third being just last month, when it again found BP’s environmental plans inadequate.

The company’s plans have also long been opposed by the Wilderness Society and other groups. Speaking last year, the Society’s South Australia’s director Peter Owen said: “The Great Australian Bight is a haven for whales, boasting the world’s most significant southern right whale nursery as well as many humpback, sperm, blue and beak whales.”

Environmentalists have called on BP to abandon its plans saying that the area could not be put at risk from oil exploitation and that the company could never adequately clean up an oil spill.

BP Platform Leaks Oil Into North Sea With No Plans to Clean It Up https://t.co/QyIfgezUUs @tarsandsRESIST @stopKXL

Today their wish was granted. BP said it was pulling out due to costs and the low oil price.

Claire Fitzpatrick, BP’s managing director for exploration and production, Australia said: “We have looked long and hard at our exploration plans for the Great Australian Bight but, in the current external environment, we will only pursue frontier exploration opportunities if they are competitive and aligned to our strategic goals.”

She added: “After extensive and careful consideration, this has proven not to be the case for our project to explore in the Bight.”

It is not surprising that today’s decision by BP was welcomed by environmental groups.

Lyndon Schneiders, Wilderness Society national director said: “This decision shows that it’s too expensive to establish the significant and costly risk management and clean up capacity infrastructure needed to protect our communities” from the enormous associated spill risks.

What a massive day for #peoplepower & Australia!
⚡️ "BP pulls out of drilling for oil in the #GreatAustralianBight"https://t.co/y8HesovwNV

Greenpeace Australia oceans campaigner, Nathaniel Pelle was ecstatic too: “This will come as a huge relief to anyone whose business relies on clean, green seas in the Great Australian Bight, to the fishing communities, to the tourism industry and it is a huge victory for them.”

She added that the Greens had a bill before the Senate that would permanently protect the Great Australian Bight from oil and gas drilling. “It’s time that bill was supported, so that this precious natural environment can be protected for generations to come,” said Hanson-Young.

Indeed, the Wilderness Society is now urging other oil and gas companies, such as Chevron, Santos and Statoil, to follow BP’s and exit the Blight. Peter Owen, the Society’s South Australian director of has also now called on the government to rescind all other permits for oil and gas in the region.

However, Statoil, BP’s partner is currently continuing with the project.

“The risk to the Bight is not entirely over,” argues Greenpeace Australia oceans campaigner, Nathaniel Pelle. “There are still multiple oil and gas companies with titles in the Bight and it won’t be over until all the oil and gas prospects have left.”