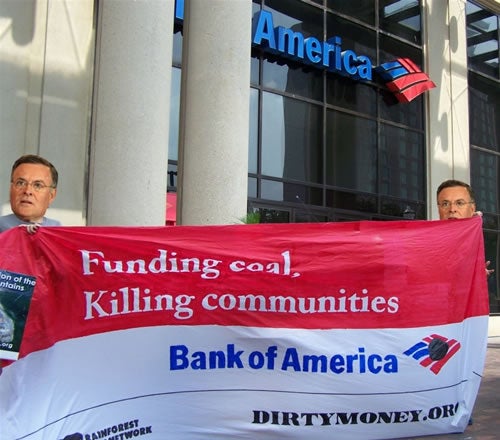 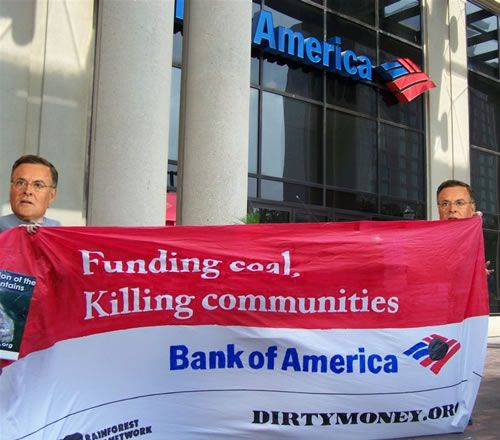 You may remember in 2008 when Bank of America stepped up and became the first bank to pass a policy about investing in mountaintop removal coal mining. Well, it turns out the devil is in the details.

At that time, Bank of America committed to “phase out financing of companies whose predominant method of extracting coal is through mountain top removal.” At the time, that meant severing ties with companies like Massey Energy—an action we applauded.

But this year, Alpha Natural Resources acquired Massey Energy. In fact, Bank of America underwrote a bond to Alpha in June to help finance the Massey acquisition.

Right now, Bank of America underwrites loans to companies that are responsible for 40 percent of all the mountaintop removal coal that was mined in 2010.

To make matters worse, Bank of America has announced it is going to charge customers $60 a year to use their debit cards at the same time that the bank is laying off 30,000 employees.

Bank of America has clearly decided that profits matter more than people or our planet. Now’s your chance to let Bank of America executives know that you’re ready to write them off.

Already, thousands of people across the country are taking to the streets to protest the Wall Street banks that have written us all off in the name of their own profits.

Sign the pledge to let the biggest bank in the world, Bank of America, know that you’ll be closing your account if it doesn’t stop trashing our environment and our economy. Don’t have a Bank of America account? You can also pledge to boycott its ATMs.