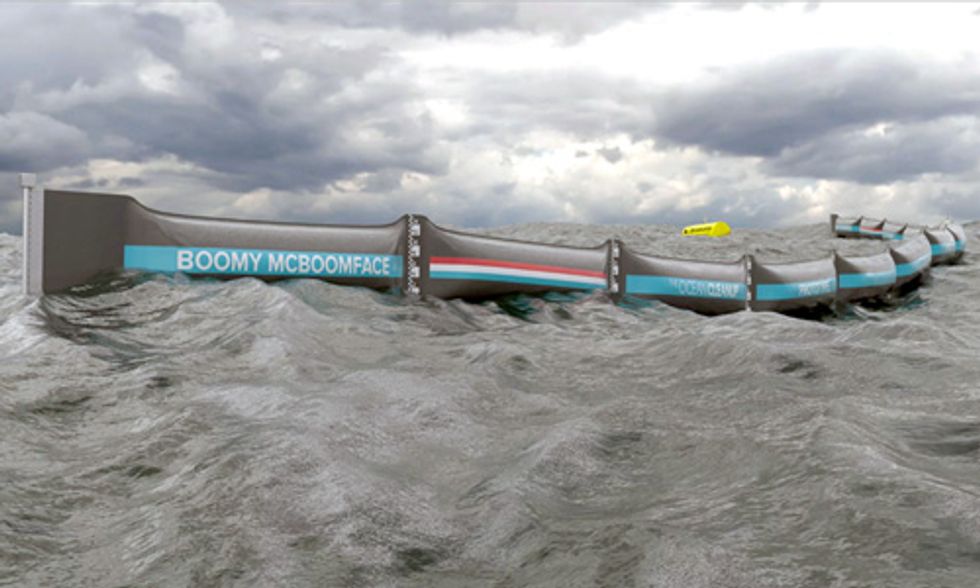 Boyan Slat's ambitious plan to rid the world's oceans of plastic has taken another step towards reality with its first prototype to be tested at sea. The Ocean Cleanup Foundation, founded by the 21-year-old Slat, has deployed a 100-meter clean-up boom today in the North Sea in The Netherlands.

The prototype was unveiled before its main partners, the Dutch government and marine contractor Royal Boskalis Westminster N.V.

The system will be installed roughly 12 nautical miles off the Dutch coast where it will undergo sensor-monitored tests for the next year. According to The Guardian, the vulcanized rubber barrier will passively coral floating trash into a V-shaped cone via the ocean's natural currents. The structure is anchored at a depth of up to 4.5 kilometers by a cable sub-system.

The 100m-long barrier will be towed 20km out to sea for a year of sensor-monitored tests. Photo credit: The Ocean Cleanup

Today is a major occasion for Slat, who came up with his highly publicized concept a few years ago when he was only a teenager.

“This is a historic day on the path toward clean oceans," he said.

The organization pointed out that although some trash may be caught during the North Sea prototype test, collecting plastic is not its objective. Rather, "the objective is to test how The Ocean Cleanup's floating barrier fares in extreme weather at sea—the kind of conditions the system will eventually face when deployed in the Great Pacific Garbage Patch."

"At the North Sea test site, conditions during a minor storm are more severe than those in exceptionally heavy storms (occurring once every 100 years) in the Pacific Ocean," the organization said.

If everything goes as planned, the first operational pilot system will be launched off Japan's coast in 2017 to stop plastic pollution from reaching Tsushima island. By 2020, The Ocean Cleanup with deploy a full-scale, 100-kilometer-long system between Hawaii and California to tackle the Great Pacific Garbage Patch.

Slat, however, noted that a successful test does not necessarily mean the North Sea prototype will survive. “I estimate there is a 30 percent chance the system will break, but either way it will be a good test."

The Ocean Cleanup describes itself as the “world's first feasible concept to clean the oceans of plastic," and the team saw successful tests of scaled-down prototypes at the Maritime Research Institute Netherlands last year.

The Dutch government, which is in full support of the project, is convinced of its feasibility, as The Guardian reported. The entire project will eventually cost an estimated 300 million euros.

“The Ocean Cleanup is an inspiring example of how we can tackle the growing problem of ocean pollution," Dutch Environment Minister Sharon Dijksma said. "I hope that with the help of the Dutch government, Boyan's prototype will turn out to be the successful solution for cleaning up the mid-ocean gyres. This is crucial to prevent permanent damage to the environment and marine life, due to the degradation and fragmentation of plastic waste materials."

Some experts have written off Slat's idea. As Marcus Eriksen, 5 Gyres co-founder and an ocean scientist wrote, “There are no islands of plastic, rather a smog of plastic that pervades the oceans."

UK-based Eunomia Research & Consulting recently compiled a report that shows an astounding 94 percent of the plastic that enters the ocean ends up on the ocean floor, with an estimated average of 70 kilograms of plastic per square kilometer on the seabed.

But Slat has taken his critics head-on with a 530-page feasibility report composed of 70 scientists and engineers. The report concluded that the concept “is indeed likely a feasible and viable ocean cleanup technique." Their conclusion has also been peer-reviewed by external experts, Slat attested in a blog post.

EcoWatch has extensively covered the increasingly devastating crisis of ocean plastic, with roughly 8 million tons of plastic dumped into the world's oceans every year.