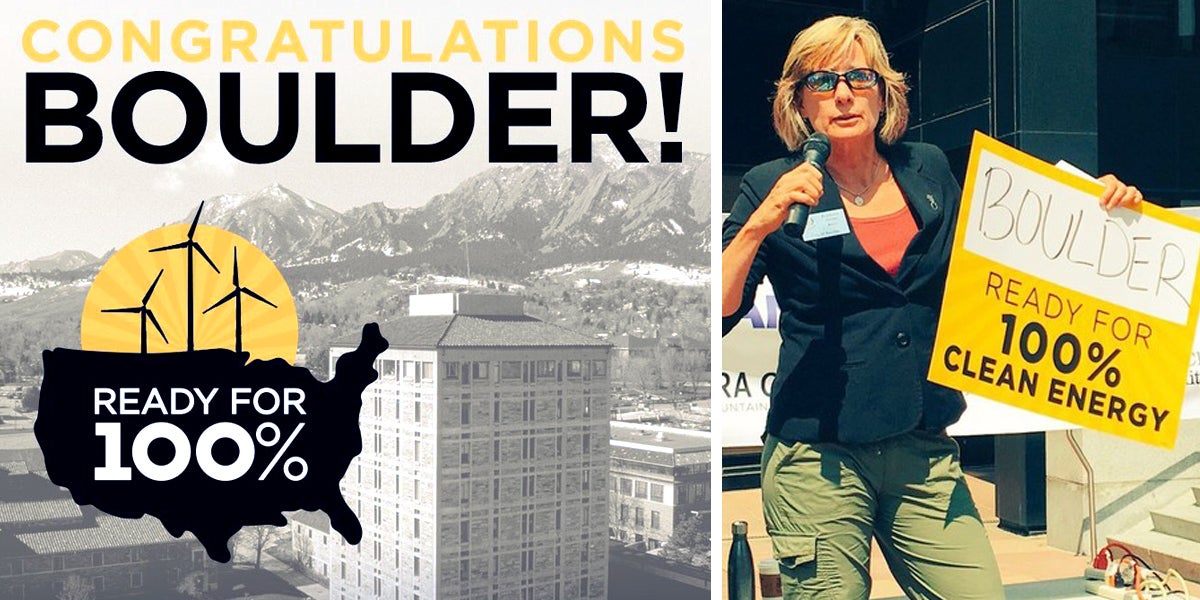 Boulder, Colorado Mayor Suzanne Jones announced Wednesday that the city would commit to being powered by 100 percent renewable electricity by 2030. Boulder now represents the 17th city in the U.S. to commit to be powered by clean, renewable energy like wind and solar, and is the second city in Colorado to make a 100 percent clean energy commitment along with Aspen.

Boulder Mayor Suzanne Jones was joined by City of Denver’s Thomas Herrod who announced that Denver would also undertake plans to examine how to move Denver to 100 percent clean energy.

The announcements were made Wednesday at an event hosted by Sierra Club Rocky Mountain Chapter, Environment Colorado, Google Project Sunroof and the Climate Reality Project where more than 30 groups and organizations came together to urge cities in Colorado to commit to 100 percent clean energy like wind and solar. The event was part of the growing Ready for 100 campaign, which is working in communities across the country to get cities to commit to transition to 100 percent clean energy by 2030.

“Boulder is committed to achieving 100 percent renewable electricity by 2030, as part of our strategy to achieve 80 percent greenhouse gas emission reductions by 2050. Climate change is the issue of our time, threatening to fundamentally change the way we live our lives. We are already experiencing increasingly intense and frequent wildfires, declining snow packs, droughts and more extreme weather events. Yet, it is increasingly clear that Congress is not going to address climate change; cities like Boulder need to take the lead. We can act as a model for cities across Colorado to craft a sustainable future by shifting our energy model from the dirty fossil fuels of the past to clean, renewable energy,” said Suzanne Jones, mayor of Boulder.

Thank you #Boulder, the #17th city to be #ColoradoReady for #ReadyFor100 (and 2nd in CO)! @JonesZan pic.twitter.com/r8RL08Bbjh

“A world powered by 100 percent renewable electricity is getting closer and closer every day. In fact, leading cities across the U.S.—including Salt Lake City and as of today, Boulder, Colorado—are making widespread renewable energy a bold new reality,” Ken Berlin, CEO and president of the Climate Reality Project, said.

” Local commitments to a renewable energy economy play a critical role in ensuring the U.S. meets the emissions targets created in Paris last year to address climate change. Just as important, they help create a healthy environment where citizens and businesses alike can thrive, as Salt Lake City and Boulder have proven. Like these outstanding communities, The Climate Reality Project’s 100% Committed campaign is dedicated to building a brighter, cleaner and more prosperous future.”

“Denver recognizes that our goal of 80 percent reduction in GHG emissions by 2050 will require big shifts in how we power our buildings, homes and transportation sector,” Thomas Herrod, Climate & GHG Program administrator of the City and County of Denver, said.

“We are committed to exploring efforts like 100 percent renewable electricity as part of our 80×50 process and look forward to having our partners here today help us take on this challenge, immediately initiating that work with a draft of results by mid-2017.”

Colorado has long been a leader on the advancement of clean, renewable energy like wind and solar. More than 300 solar companies currently employ almost 5,000 people in Colorado—nearly twice as many people as the coal mining industry. Prices for solar energy have fallen by 80 percent in recent years. In 2012, private investment for installing solar on Colorado homes and businesses totaled $187 million. Earlier this month, Xcel Energy entered into a landmark settlement with various clean energy and environmental advocacy groups that will provide Colorado consumers with greater energy choice and access to renewable energy like rooftop solar.

“The Colorado Sierra Club’s Ready for 100 campaign is working to assure a just and equitable transition to a clean energy future city-by-city and town-by-town across the state,” Jim Alexee, director of Sierra Club Rocky Mountain Chapter, said.

“The cities of Denver, Boulder, Fort Collins and Aspen have all made bold progress and commitments towards that goal. It’s critical that we come together in our hometowns as individuals, businesses and community leaders, to assure that this transition happens as quickly and equitably as possible,”