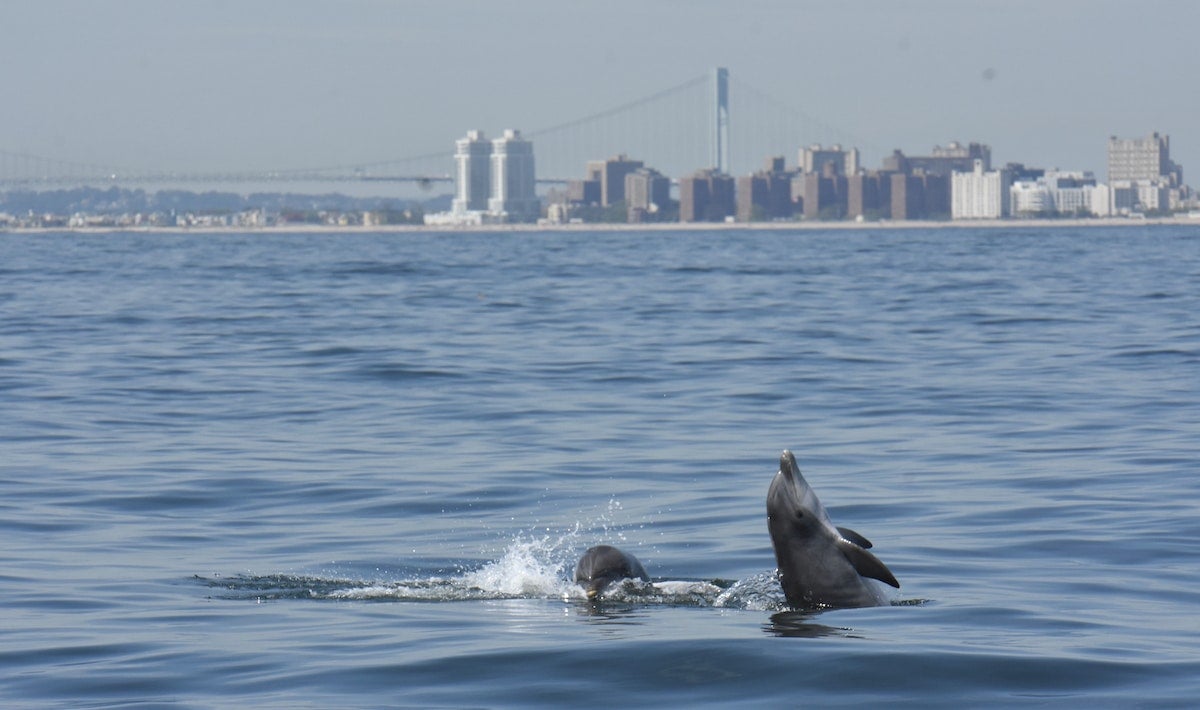 When you think of the New York Harbor, you might imagine boats, skyscrapers, a noisy traffic on the nearby streets of NYC. What you may not expect to find are dolphins. But according to a newly released study from Wildlife Conservation Society, the New York Harbor is a popular feeding ground for bottlenose dolphins from spring through fall.

“We’ve been seeing dolphins regularly,” said Howard Rosenbaum, director of the WCS Ocean Giants Program and a senior conservation scientist for the New York Aquarium, as reported by Inside Climate News. “I think what’s interesting is that you can see them quite frequently, if you’re on the beach. It’s not all the time, and it might not be the right time of the day when you’re looking, but we do see them regularly.”

The study was initially started to study whales in the New York-New Jersey Harbor Estuary, but the researchers ended up hearing a lot of dolphin activity on the acoustic monitoring devices. The area is quite rich in biodiversity, with whales, dolphins and more than 200 species of fish.

“I think people in general don’t associate the waters off New York with being diverse, ecological, ecologically rich, important areas for species like marine mammals,” Rosenbaum said. “Over the last decade or so, we’re seeing some pretty important changes here in terms of certain species, like dolphins and whales, increasingly using these habitats as a suitable prey base for these animals.”

Study author Sarah Trabue, formerly of Columbia University and now a member of the Ocean Giants Program, noted that most of the time the dolphins are in the estuary, they are feeding, meaning this area is a feeding hotspot for the species. Peak activity was recorded from late summer to early autumn.

The team hopes to use the data to inform measures that reduce human-wildlife conflicts, especially as the study authors found the dolphin clicks decreased during times of heavy vessel traffic.

Trabue explained in a statement, “By investigating how marine predators, such as bottlenose dolphins, are behaving within heavily urbanized ecosystems, we can gain insight on how these predators influence and are influenced by their environment, which can be used to guide conservation efforts, mitigation measures and best practice recommendations.”

Biodiversity Risks to Linger at Least a Half Century After Global Temperature Peaks, Study Says
Even if global temperatures start to decrease, after peaking this
By Tiffany Chaney
Join the Plastic-Free Parks TrashBlitz
People visiting U.S. national parks and other wild spaces are
By Olivia Rosane
UN Chief Declares ‘Ocean Emergency’ on First Day of Global Conference
From sea level rise to ocean acidification to plastic pollution,
By Olivia Rosane