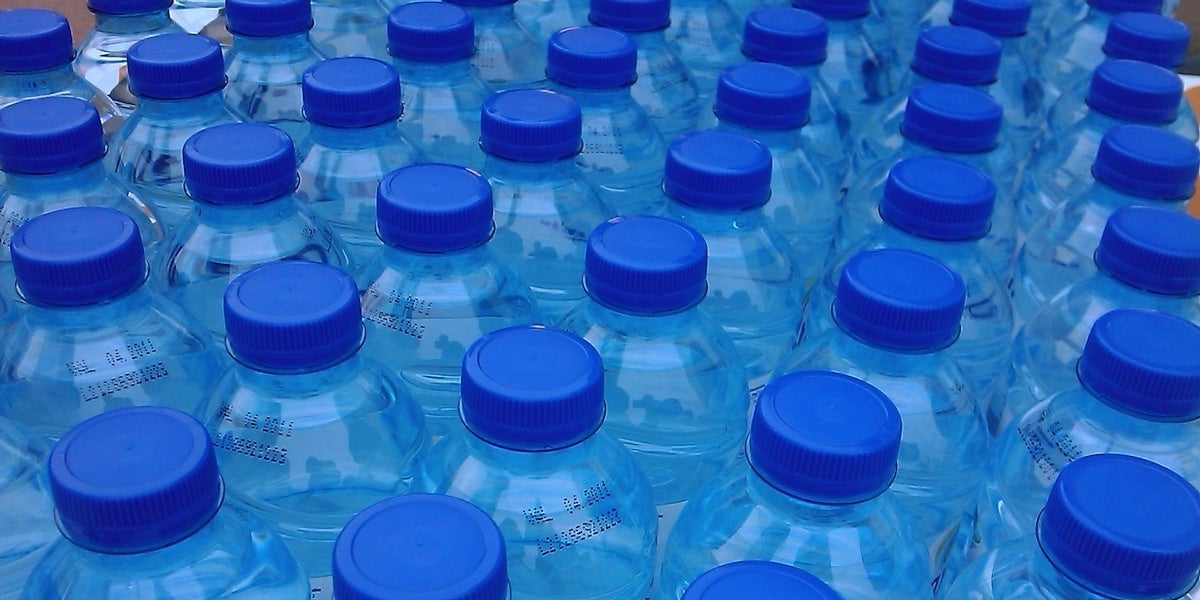 You now have another good reason to avoid
bottled water. An investigation on brands from around the world determined that the water is often contaminated with tiny pieces of plastic.

The new study, conducted by journalism organization Orb Media and researchers at the State University of New York at Fredonia, has already prompted the World Health Organization (WHO) to launch a review into the potential risks of plastic in drinking water.

For the study, researchers tested 259 individual bottles across 11 brands purchased from 19 locations in nine countries. Using fluorescent tagging with Nile Red dye, the scientists found that 93 percent of the samples had some sort of
microplastic contamination, including polypropylene, nylon and polyethylene terephthalate (PET). The bits ranged in size from the width of a human hair to a red blood cell.

One bottle showed an excess of 10,000 microplastic particles per liter. Only 17 bottles had no contamination.

An average of 10.4 microplastic particles was detected per liter, or about twice as much contamination discovered in the group’s
previous study on tap water.

People “have a right to accurate and relevant information about the quality and safety of any product they consume,” Lisa Lefferts, senior scientist at the Center for Science in the Public Interest,
told Orb. “Since consumers are paying a premium for bottled water, the onus is on the bottled water companies to show their product is worth the extra cost.”

“Please name one human being on the entire planet who wants plastic in his or her bottle,” added Erik Solheim, executive director of the United Nations Environment Program. “They will all hate it.”

Other studies on microplastics have found the pervasive particles in
ice cores, in the deepest parts of the ocean and on every beach worldwide. An unsettling UN News article once put the problem this way: “As many as 51 trillion microplastic particles—500 times more than stars in our galaxy.”

A WHO spokesman told the
Guardian that while there is not yet any evidence on the impacts of microplastics on human health, the organization noted it’s an emerging area of concern. The spokesman said the WHO will “review the very scarce available evidence with the objective of identifying evidence gaps, and establishing a research agenda to inform a more thorough risk assessment.”

In response to the study, several brands questioned the methodology or said that the amount of plastic was overstated.

Danone, which sells Evian and Aqua, told Orb it is “not in a position to comment as the testing methodology used is unclear. There is still limited data on the topic, and conclusions differ dramatically from one study to another.”

The American Beverage Association, which represents Nestlé, Evian, Dasani and Aquafina, told Orb that “the science on microplastics and microfibres is nascent and an emerging field … We stand by the safety of our bottled water products and we are interested in contributing to serious scientific research that will … help us all understand the scope, impact and appropriate next steps.”

Minalba told Orb that it abides by the Brazilian government’s quality and security standards. Biserli and Wahaha did not respond to Orb’s request for comment.