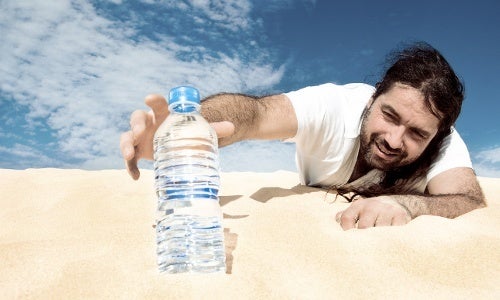 As the drought in California rolls into its fourth year, causing mandatory water cutbacks by cities and private citizens and concern about the state’s enormous agricultural sector, bottled water plants in the state are attracting increasing attention and controversy. Bottled water accounts for a tiny fraction of the water consumed in the state but it’s become something of a symbol of who gets access to water for profit and who is being forced to cut back.

With Californians asked to cut back on water use, bottled water plants are drawing increased scrutiny.

Last week, Starbucks announced that it would be moving the production of its “globally responsible” Ethos Water brand from California to Pennsylvania within the next six months. Its Pennsylvania facility already bottles the water sold on the east coast.

Starbucks’ senior vice president of global responsibility and public policy John Kelly said, “We are committed to our mission to be a globally responsible company and to support the people of the state of California as they face this unprecedented drought. The decision to move our Ethos water sourcing from California and reduce our in-store water reductions by more than 25 percent are steps we are taking in partnership with state and local governments to accelerate water conservation.”

Ethos Water was founded in 2002 in Southern California, promising to donate a percentage of each sale to water projects in developing countries, currently amounting to five cents on the sale of each $1.95 bottle of water. The company was bought by Starbucks in 2005. Ethos has created partnerships with organizations such as the Oscars. Environmental activist Leonardo DiCaprio was seen carrying a bottle at the awards ceremony, and fellow environmentalist Matt Damon has appeared in an ad for the brand.

The move follows a recent article in Mother Jones calling attention to the fact that its West Coast bottling plant is located in Merced, California, drawing its water from private springs in Baxter a few hours north of Merced, as well as from Merced city water. Both Baxter and Merced are in areas of “exceptional drought.”

“While bottled water accounts for just a small fraction of California’s total water use, some residents are nonetheless fed up with bottling plants that profit off their dwindling water supply,” said Mother Jones. “Protesters have begun staging events at Nestlé’s bottling facility in nearby Sacramento.”

Nestlé’s facility buys millions of gallons of Sacramento municipal water and also bottles spring water shipped in from Northern California counties. A grassroots group called the Crunch Nestlé Alliance has been organizing to shut down the plant.

Residents in Merced are also concerned about the Safeway-Lucerne Foods bottling plant in the city that’s pulling groundwater from local wells as they’re being asked to cut back on showers and stop watering their lawns.

The Merced Sun-Star quoted area resident Jandrea-Marie Gabrielle saying at a city council meeting, “Perhaps watering lawns are the least of California’s worries. You might think that in the midst of a drought emergency, diverting public fresh water supplies to bottle and selling them would be frowned upon.”

And while Starbucks is closing its bottled water facility, another will soon be opening in the arid state. The Crystal Geyser Water Company will be opening a plant in Mount Shasta that will take hundreds of thousands of gallons of water a day from an aquifer that feeds the Sacramento River and provides drinking water for millions of people. The converted Coca-Cola plant is expected to begin operations this fall. While a company executive said it’s working with area residents to make sure its activities “will not impact the environment in any detrimental way,” local citizen Raven Stevens pointed out, “Crystal Geyser in one day plans to pump more water than any three of my neighbors will use in an entire year.”

California currently has no limits on the amount of groundwater that can be pumped from private property, although state regulations on water withdrawal from the most endangered aquifers with start phasing in after 2020—when the drought could be a decade old. Bottled water companies using water tapped on private property are exempt from the mandatory water cuts placed on cities and towns in March.

“Bottling water is a legal use of water under the law,” said Nancy Vogel, spokeswoman of the California Department of Water Resources.