8 Books to Light a Dark Season 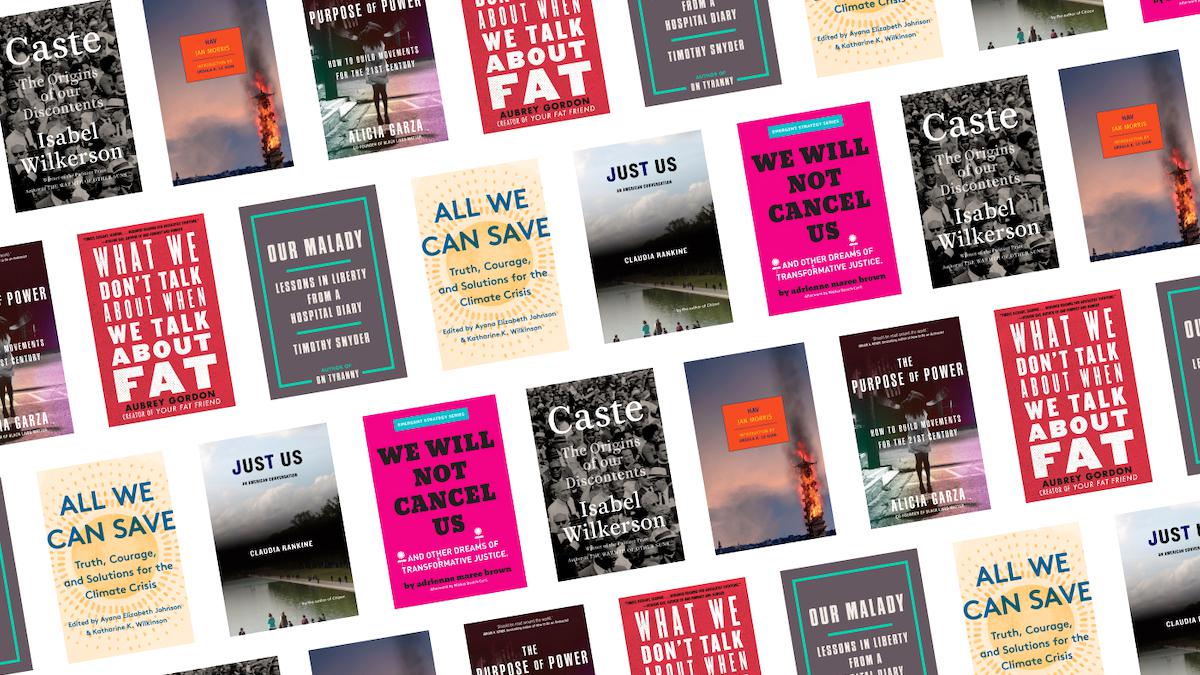 It’s been a hell of a year. YES! editors recommend relevant and illuminating books that help us find our way forward.

1. All We Can Save: Truth, Courage, and Solutions for the Climate Crisis

A splendid offering of wisdom, warmth, and inspiration to reshape our vision of climate futures, All We Can Save is a skillfully curated collection of essays, poems, and illustrations that is decidedly feminine in its character and feminist in its approach. In her essay, “Sacred Resistance,” contributor Tara Houska writes, “Much of the space we call ‘the climate movement’ appears to be modeled after the same systems of inequity and separation we are attempting to change, undo, or outright dismantle.” In a beautiful cross-section of society’s most visionary voices on climate, the book instead invokes the powers of compassion, connection, and justice. Remaking the world is possible, they say, but whatever you do, don’t call it hope. The pursuit of solutions cannot afford passive optimism. As Houska concludes, “We are never far from the answer to the problem we have created — it is within each of us.” — Breanna Draxler

2. Caste: The Origins of Our Discontents

Isabel Wilkerson’s Caste: The Origins of Our Discontents invites a reappraisal of how we view race in this country. The book is eminently relevant in these fraught times, where the topic of race is everywhere. Yet Wilkerson never uses the words “race” or “racism” to describe the experience of African Americans, continuing an approach she took in her previous work, The Warmth of Other Suns. Rather she writes about “upper caste” and “lower caste” to describe Jim Crow hierarchy, where everything you could or couldn’t do was based on what you looked like.

She compares India’s treatment of its lower-caste citizens and Nazi Germany’s treatment of Jews to America’s treatment of African Americans. Racism, she says, is insufficient to capture the enormity of what Black people endure. The word is so overused, people stop hearing it. She calls race “the visible agent of the unseen force of caste. Caste is the bones, race the skin.” It’s an invitation for people to peer beneath the surface of the language they’ve gotten accustomed to. — Lornet Turnbull

Jan Morris is primarily known to contemporary readers as a British travel writer with dozens of books to her name. But she was also a journalist and historian who covered the first ascent of Mount Everest and the war crimes trial of Adolf Eichmann, and also one of the first high-profile transgender artists, beginning with her 1974 coming-out memoir, Conundrum. Morris died Nov. 20, 2020, at age 94.

One of Morris’ most interesting works is Hav, a novel in the guise of a travelogue to a fictitious Mediterranean city-state. The book includes 1985’s Last Letters From Hav, and its 2006 sequel (when she “revisited” the country), Hav of the Myrmidons.

The book explores the conflict between tradition and modern life, Cold War tensions, indigenous populations facing extinction, how society changes after tumultuous upheaval, and the rise of religious fundamentalism and neoliberal economics. All of it is told with Morris’ razor-sharp observations and poetic language, and as Ursula K. LeGuin notes in the introduction, “it is a very good guidebook, I think, to the early twenty-first century.” — Chris Winters

4. Just Us: An American Conversation

Under discussion in Claudia Rankine’s Just Us: An American Conversation is our abiding but often unacknowledged American system of racial inequality. Rankine, a Black woman, attempts honest conversations with White friends and strangers who don’t see what to her is the obvious reality of everyday White supremacy. In a series of telling moments — on an airplane, at a dinner party — Rankine allows herself to push against the glass wall of social convention by acknowledging racism. Her measured but discomforting comments are an experiment that invites other people to see themselves through her eyes and perhaps arrive at a moment of shared reality. But the smart, liberal White people Rankine engages usually respond with denial or the lack of awareness bred of ingrained privilege. Brilliant and generous, this book of essays, poems, and images is one for all Americans to give, share, and talk about. — Valerie Schloredt

5. Our Malady: Lessons in Liberty From a Hospital Diary

When hospital staff in a chaotic urban ER left Timothy Snyder awaiting treatment for 17 hours, he came close to death, fading in and out of consciousness. Turns out his bloodstream was infected from a liver abscess that had been noted, but not treated, when his burst appendix was removed two weeks earlier at the same hospital. Friends asked why this eminent Yale historian hadn’t called in a favor to get the medical attention he needed sooner. But leveraging privilege hadn’t occurred to Snyder, best known for On Tyranny, his book about threats to democracy.

In the weeks that followed, as COVID-19 spread across the United States, Snyder battled his malady and made notes on ours — a medical system of extreme inequality, designed to maximize profit, that makes everyone sicker. The result is Our Malady: Lessons in Liberty from a Hospital Diary. You’ve heard that health care is a human right. Snyder brings rage and empathy to his assertion that health is also necessary to liberty, and health care for all a path to real freedom. — Valerie Schloredt

6. The Purpose of Power: How We Come Together When We Fall Apart

Alicia Garza’s new book is the perfect answer to the question: Where do I start when it comes to organizing and movement building? What can I do?

In The Purpose of Power: How We Come Together When We Fall Apart, Garza uses her own story to describe the ebbs and flows of movements: building a base, organizing around an issue, taking action, and creating positive change. Going from a sexual-health peer educator in high school to community work in the Bay Area to co-founding Black Lives Matter, possibly the largest social movement in U.S. history, Garza shares the victories and challenges she’s experienced. Power, she writes, is the ability to affect the conditions of our own lives and the lives of others. Simply joining those who think like you is not how we gain power. “A movement is successful if it transforms the dynamics and relationships of power — from power being concentrated in the hands of a few to power being held by many.” — Zenobia Jeffries Warfield

7. We Will Not Cancel Us

What happens when actions meant for good — to hold people who cause harm accountable — turn out harmful themselves? Leave it to adrienne maree brown to dive fearlessly and faithfully into perilous waters in her new short book We Will Not Cancel Us: And Other Dreams of Transformative Justice, the first in her Emergent Strategy Series. Instead of taking offense or simply shutting down, as many on the receiving end of call out and cancel culture have done, amb responded to critical comments to her blog post “Unthinkable Thoughts: Call Out Culture in the Age of COVID-19,” in a loving, inquisitive, facilitating way and wrote a book about it.

“I have learned a lot more about some things I thought I knew,” she writes “… I got clearer on the parts that were triggers for people… I homed in on what is within my expertise, and reaffirmed that celebrity activism is not my jam.” We Will Not Cancel Us shares those lessons to help us all break the cycles of harm — be they intentional or unintentional. — Zenobia Jeffries Warfield

In a world where thinness reigns supreme and diet talk is as normal as talking about the weather, What We Don’t Talk About When We Talk About Fat is a much-needed addition to fat discourse. As a long-time fat activist, Aubrey Gordon seamlessly threads a personal narrative with data and history, examining the roots of anti-fat bias and the harm it causes. The book is accessible for folks who may not know much about anti-fatness. And for fat people, it’s an incredibly validating and empowering read.

Particularly inspiring is Gordon’s final chapter, in which she details her vision for a better, just, and equitable world. — Ayu Sutriasa