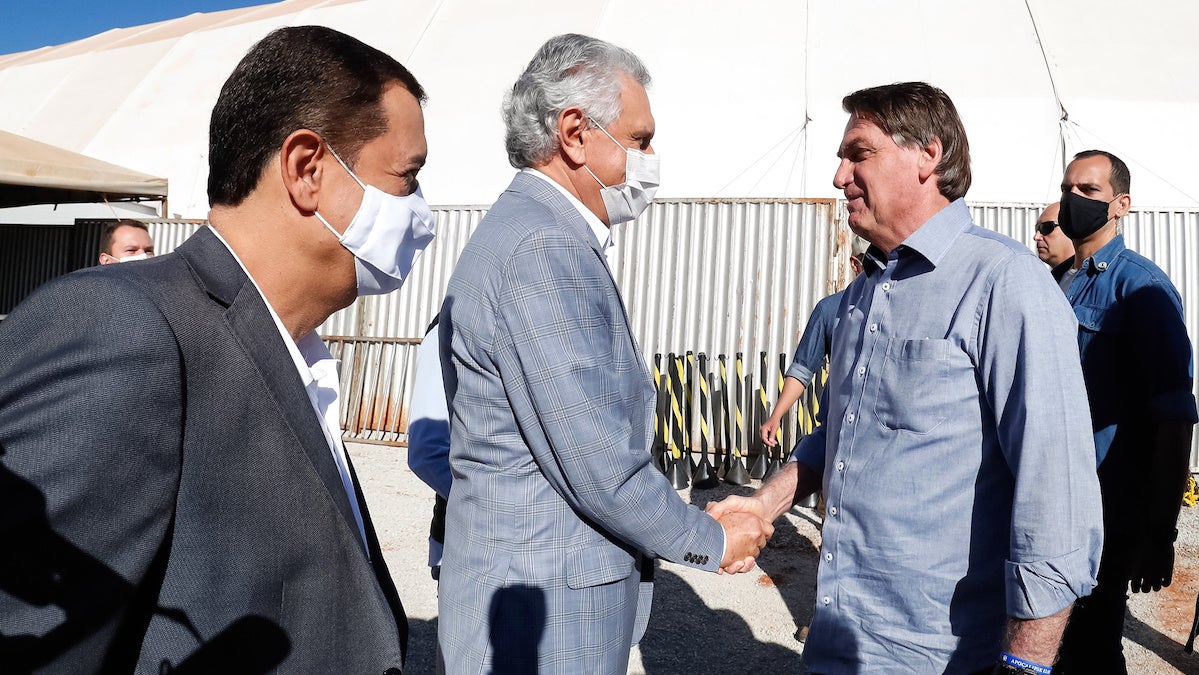 Brazilian President Jair Bolsonaro meets Ronaldo Caiado, governor of the state of Goiás on June 5, 2020. Palácio do Planalto / CC BY 2.0

Far-right Brazilian President Jair Bolsonaro, who has presided over the world’s second worst coronavirus outbreak after the U.S., said Tuesday that he had tested positive for the virus.

The news comes after Bolsonaro has repeatedly dismissed the risk posed by the virus both to himself and others and argued against social distancing measures as a threat to the economy.

“In my particular case, because of my history as an athlete, in case I were contaminated by the virus I wouldn’t need to worry. I wouldn’t feel anything or it would be, at most, similar to a little flu, or a little cold,” he said during a national television address March 24, as The Associated Press reported.

His approach has earned him protests at home and worldwide criticism for allowing the virus to spread in his country, The New York Times reported. He fired one health minister in April over disagreements about how to respond to the pandemic and forced a second to quit less than a month later. The current health minister is an active-duty general with no medical experience. Brazil has now reported more than 1.6 million confirmed cases and more than 65,000 deaths, falling second only to the U.S. in both categories.

Bolsonaro took a test for the virus Monday after falling ill with fatigue, muscle pain and a fever. His illness occurred two days after he attended a Fourth of July lunch at the home of Brazil’s U.S. Ambassador Todd Chapman, where Bolsonaro and other attendees were pictured sitting side by side without masks. The ambassador and his wife have since tested negative for the virus but are remaining in quarantine.

So far, Bolsonaro’s diagnosis has not changed his tone. As he announced his test results, he continued to focus on the importance of reopening Brazil’s economy.

“You can’t just talk about the consequences of the virus that you have to worry about. Life goes on. Brazil needs to produce. You need to get the economy in gear,″ he said, according to The Associated Press.

He was also widely criticized on social media for taking off his mask while speaking to reporters about his diagnosis, The Indian Express reported.

Bolsonaro, who has tested positive for coronavirus, just exposed every journalist to the virus, in case you were wondering the extent to which these far-right anti-science demagogues are an immediate danger to society. https://t.co/neGHHrtzsJ

Bolsonaro is an ally of U.S. President Donald Trump, NPR reported, who has also been criticized for dismissing the severity of the pandemic. Like Trump, Bolsonaro has touted the benefits of hydroxychloroquine for treating the coronavirus, an anti-malaria drug that the Food and Drug Administration has warned against taking for COVID-19.

But Bolsonaro said his medical team was treating him with the drug on Tuesday and that he was feeling “very well,” according to The New York Times.

Politicians and public health experts said that Bolsonaro’s diagnosis was unlikely to change Brazil’s approach to the virus unless he grew seriously ill. The country is currently in the process of reopening.

“My concern is that he will use this to say, ‘See, I’m fine, if you catch this you will survive,'” Rio de Janeiro community activist Day Medeiros told The New York Times. “Everything that happens to him has real repercussions in how people behave here. This is really serious.”

But one analyst thought the diagnosis would ultimately harm Bolsoarno’s political career.

“Despite publicly shrugging off his positive test for Covid-19, it marks the beginning of the end of his administration,” Robert Muggah, director of Rio-based think tank the Igarape Institute, told CNBC in an email. “It is yet another visible expression of his recklessness and ineptitude.”