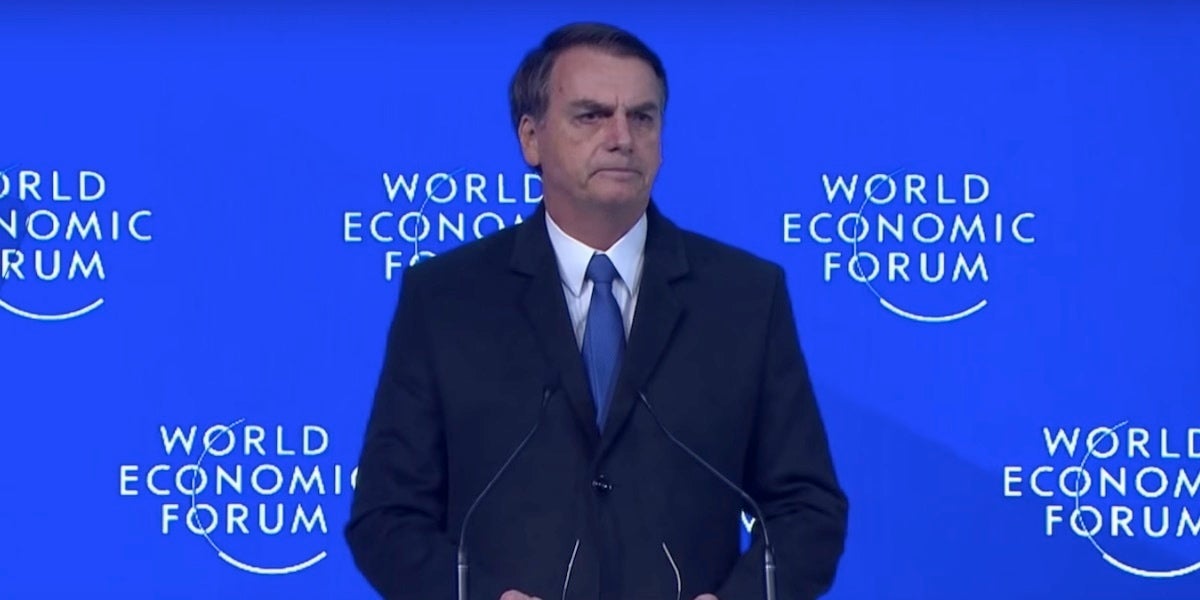 In his first major international speech, Brazil’s new president Jair Bolsonaro told the politicians and business leaders gathered in Davos this week that he’s opening up his country and its natural resources to foreign investment, all while—somehow—preserving the nation’s environment and biodiversity.

“It is now our mission to make progress in harmonizing environmental preservation and biodiversity on the one hand, with much-needed economic development, while bearing in mind that these are interdependent, inseparable pillars of our society,” he said Tuesday at the World Economic Forum’s annual meeting.

“Those who criticize us have actually a great deal to learn with us. We wish to govern by example,” he added.

While campaigning for president, the far-right Congressman promised to loosen protections for the Amazon rainforest and open it up to development, causing many indigenous communities and environmentalists to worry about the forest’s future.

The world’s largest rainforest hosts the richest biodiversity of any ecosystem and is an important carbon sink, making it vital for preventing worse climate change. Bolsonaro initially pledged to withdraw from the Paris climate agreement before recanting.

“We are the one country that most preserves the environment,” he also claimed. “No other country in the world has as many forests as we do.”

That’s not exactly true. As EcoWatch previously mentioned, although deforestation in the Amazon decreased by 70 percent from around 2005 to 2011 due to rainforest protection movements, from 2011 to 2017, as the country entered a more chaotic political period, the decrease in deforestation stopped, but it did not reverse.

Additionally, according to Climate Home News, “in 2018, under the previous administration, deforestation reached a ten-year high. During the election period, with a Bolsonaro victory anticipated, forest loss jumped by 50 percent, year-on-year.”

What’s more, just hours after taking office, he issued an executive order that transferred responsibility for recognizing indigenous lands to the ministry of agriculture, which has ties to the agribusiness lobby and other industries.

During his short speech, Bolsonaro told the Davos audience to “get to know our Amazonian region, our coastlines, our beaches and our cities and our wetlands,” but also called for even more exploitation of the country’s precious resources.

“Brazil is home to the world’s greatest biodiversity and we have abundant mineral resources,” he said. “We want to engage with partners who master technology so that this marriage translates into progress and development for all. Our actions, make no mistake whatsoever, will certainly attract you to seize great business opportunities, not only for the good for Brazil but also for the good of the whole world at large.”

Bolsonaro promised to “reduce the tax burden, simplify tax rules and make life easier for those who want to produce, do business, invest and create jobs.”

“[Do] not to be distracted by president Bolsonaro’s efforts to calm investors interested in investing in Brazil,” Mirabal said, as quoted by Climate Home News.

“You cannot imagine what will happen if the government of Brazil implements its intention to roll back the rights of indigenous peoples to their forests, in favor of implementing projects for mining, transportation, communication and energy on indigenous territories,” Mirabal continued. “The outcome of implementing president Bolsonaro’s development plans will visit upon the entire Amazon a genocide and an environmental disaster on a scale that the world has not seen before.”