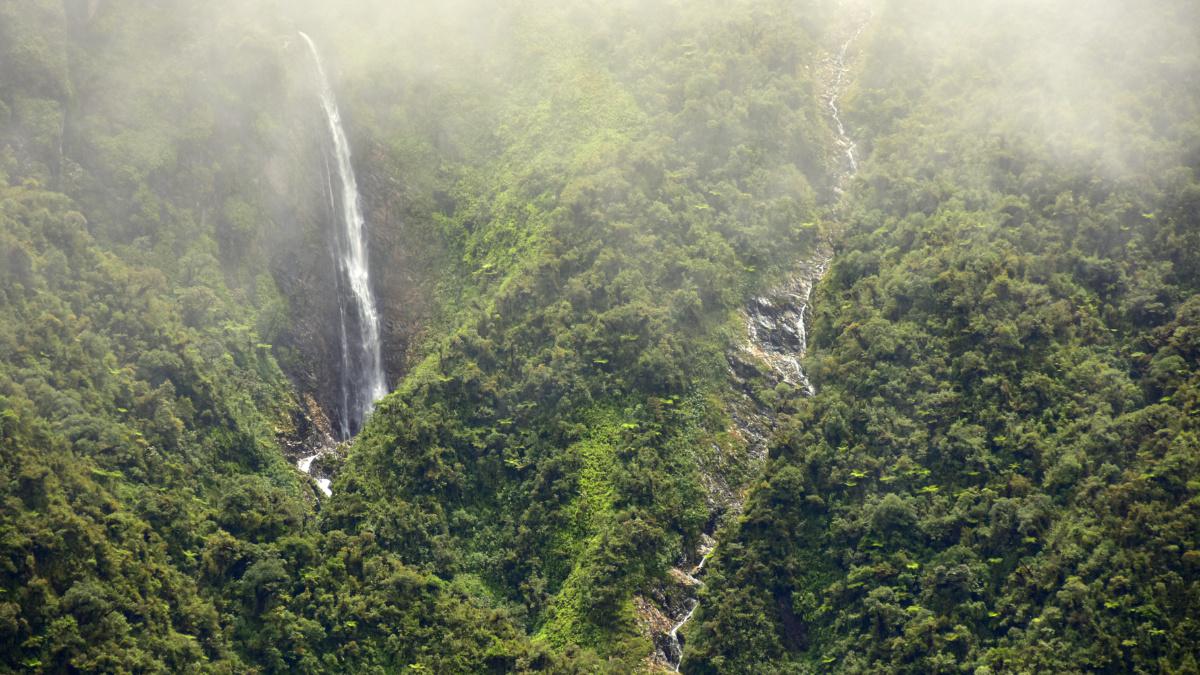 The Andean mountains of the Zongo Valley in Bolivia where the RAP expedition took place are steep and rugged, with numerous waterfalls and cascades. Trond Larsen / Conservation International

In the Bolivian Andes, scientists found 20 new species and rediscovered plants and animals not seen for decades.

The findings were made on a 14-day scientific expedition in March 2017 led by non-profit environmental group Conservation International (CI) high into the cloud forests of the Andean mountains. As part of CI’s Rapid Assessment Program, which assembles “ecological SWAT teams” to quickly and efficiently assess the health of ecosystems around the world, the team identified a total of 1,204 species in the Zongo Valley, 20 of which were completely new to science, Conservation News reported.

Near the capital city of La Paz, Zongo Valley is known as the heart of a rich, biodiverse region, a CI press release stated. The cloud forests are well-preserved atop high, steep, rugged mountains more than 10,000 feet above sea level, perhaps explaining how so many species have remained undetected and unfound until now. Biologists and expedition team members hiked for more than two weeks through the valley to access the ecosystem, Business Insider reported.

Among the newly discovered species are the extremely venomous mountain fer-de-lance viper, the red, yellow and green Bolivian flag snake and the tiny lilliputian frog, according to the CI release. In addition, the valley flourishes with stunning plant and butterfly species, CNN reported. One such new orchid species, the Adder’s mouth orchid, has parts that cleverly mimic insects, tricking them into transferring pollen for the flowers, CNN noted.

Although new to science, one species of bamboo is well-known to local Indigenous communities, who use it to make musical instruments called sikus or zampoñas, the CI release said.

“[In Zongo] the noises you hear are from nature — all sorts of insects, frogs and birds calling, wonderful rushing sounds and cascades of waterfalls. Everything is covered in thick layers of moss, orchids and ferns,” CI’s expedition leader Trond Larsen told CNN.

In addition to identifying new species, researchers rediscovered four species thought to be extinct. The CI release mentioned how the satyr butterfly was last seen 98 years ago, but researchers caught a specimen in a trap containing its food source: rotten fruit. This species is believed to only live in the Zongo Valley. Another, the devil-eyed frog, was last seen 20 years ago before a hydroelectric dam was built in its habitat, CNN reported.

“The remarkable discovery of new species and rediscovery of species once thought extinct illustrates just how important it is to continue to sustainably develop La Paz in a way that protects and conserves the nature that surrounds it,” Larsen told Conservation News. “This area has become a safe haven for amphibians, butterflies and plants that haven’t been found anywhere else on earth. We owe it to future generations to keep it that way.”

Despite the pristine habitat that many of the animals were found in, some are having to adapt to the climate crisis by moving to higher ground in search of cooler conditions, CNN reported. To get higher, animals often have to traverse forests to reach more habitable areas.

“Unless you keep those corridors of forest intact then those animals and plants have no way to move and no way to adjust to those changing conditions,” Larsen explained to CNN. “That’s why protecting places like the Zongo is so essential in the face of climate change.”

The findings will inform sustainable development plans for rural areas of La Paz, 78 percent of which falls within the Zongo, the CI release said. The city will use the information to ensure that natural ecosystems are conserved while water resources are tapped to provide drinking water and electrical power to the residents of La Paz and El Alto, the release continued.

“Anytime humans depend on an ecosystem for valuable resources and livelihoods — in this case, water and agriculture — there is a risk that it will be overexploited,” Eduardo Forno, executive director of CI-Bolivia told Conservation News. “Currently, some of the biggest threats facing the Zongo Valley are the fires that are set to clear land for small-scale farming, which provides food and income for the rural communities in the area. This has the potential to destroy wildlife habitats and disrupt water sources.”

In the CI release, Forno emphasized how the new discoveries helped make a case for a conservation area near La Paz to conserve the valuable nature and water of Zongo Valley.

“We are working with the municipality of La Paz and rural communities to use the results from our rapid assessment to strike a balance between protection and production in the Zongo Valley,” he told Conservation News. “The plan is to help show the government and local communities the importance of the biodiversity in their own backyard — not only for their livelihoods, but for the entire planet.”