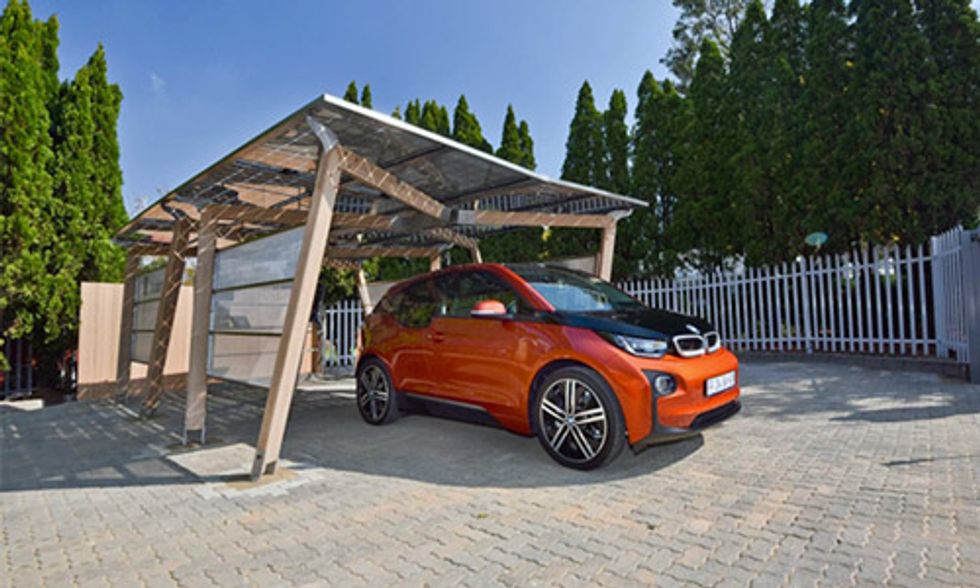 BMW South Africa is reducing its carbon footprint with the launch of its electric vehicle charging stations. The group's first 100 percent renewable solar-powered carport charging station will roll out in July.

The BMW i solar carport, produced by SUNWORX, is made of bamboo with stainless steel housing for the solar modules. The solar modules can produce an average of 3.6 kilowatts of power, which will be transferred to the BMW i Wallbox. The Wallbox shows a live readout of how much power is being generated by the carport and charges electric and plug-in hybrid BMW models, according to a BMW South Africa press release.

"With the rollout of the BMW i solar carport, the BMW Group is demonstrating its commitment of shaping the future of individual mobility–not only with ground-breaking products and services, but also with the global as well as local involvement in the expansion of home and publicly accessible charging infrastructure for electrically powered vehicles," Tim Abbott, CEO of BMW Group South Africa and Sub-Sahara, said.

BMW South Africa plans to distribute public carports to major cities such as Johannesburg and Cape Town. Electric and plug-in hybrid owners will be able to use the public stations with ChargeNow, a card and app used for access and payment at the stations.

Individuals and businesses can purchase carports as well. The power in the BMW i Wallbox that is not used to charge a car can feed into a home's energy system, Clean Technica reported.

BMW unveiled its solar-powered carports in the U.S. in May 2014.

“With the solar carport concept we opted for a holistic approach: not only is the vehicle itself sustainable, but so is its energy supply,” Tom Allemann, who is responsible for the carport design at BMW Group DesignworksUSA, reported Inhabitat. “This is therefore an entirely new generation of carports that allows energy to be produced in a simple and transparent way. It renders the overarching theme of lightweight design both visible and palpable.”