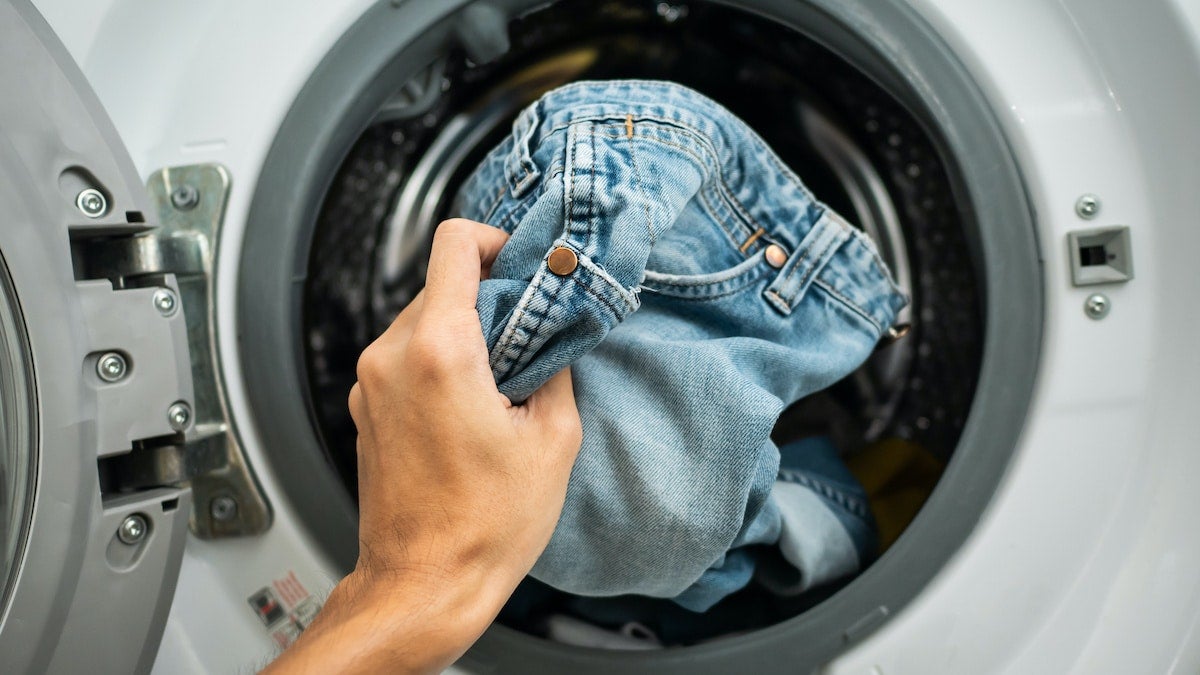 Scientists and environmental advocates have long known that microfibers rub off clothing in the washing machine. Wachiwit / iStock / Getty Images Plus

What is the environmental footprint of your favorite pair of blue jeans?

A new study indicates it might be quite large. The study, published in Environmental Science and Technology Letters Wednesday, found denim microfibers had infiltrated all the way to the Canadian Arctic Ocean. Researchers say it’s a telling example of the extent of human-generated pollution.

“It’s not an indictment of jeans — I want to be really clear that we’re not coming down on jeans,” study coauthor and University of Toronto environmental scientist Miriam Diamond told WIRED. “It’s just a really potent example of human impact.”

Scientists and environmental advocates have long known that plastic microfibers rub off synthetic clothing in the washing machine, where they enter the world’s oceans and rivers via wastewater treatment plants. One study estimated that two garbage trucks worth of microfibers enter Europe’s oceans this way every day. These fibers have been found everywhere from the bellies of deep-sea crustaceans to concentrated hotspots in the sediment of the Mediterranean seafloor.

At any given moment, about half of the world’s population is wearing blue jeans or other types of denim. So researchers at the University of Toronto wondered whether the popular garment had an equally global environmental impact.

To find out, they looked at water samples from the Canadian Arctic Archipelago, the Great Lakes, and suburban lakes near Toronto. They found that indigo denim microfibers made up a sizable percentage of all the microfibers found in the three locations, according to an American Chemical Society (ACS) press release; the percentages were as follows:

“Unfortunately, the results are not surprising to environmental scientists; they are even expected,” Caroline Gauchotte-Lindsay at the University of Glasgow in the UK, who was not involved in the study, told New Scientist.

The researchers didn’t just look to see where the denim ended up. They also examined how it got there. To do this, they washed used, new and new distressed jeans, according to WIRED. They found that the new jeans released more fibers, and that a pair of jeans could release 56,000 microfibers per wash.

They also counted the denim microfibers that turned up in effluent, or discharge, from two wastewater treatment plants on Lake Ontario. They concluded that as many as a billion denim microfibers could be entering the lake every day.

While denim is made with organic fiber, not plastic, study coauthor Sam Athey told WIRED that it could still bring human contaminants to ocean ecosystems.

“They’re called ‘natural’ textile fibers,” Athey said. “I’m doing air quotes around ‘natural’ because they contain these chemical additives. They also pick up chemicals from the environment, when you’re wearing your clothes, when they’re in the closet.”

The researchers did not check to see if the denim had entered the Arctic food web, but they did check the guts of Great Lakes rainbow smelt. However, they only found a single denim fiber in all of the fish they collected.

More research is needed to determine what impact, if any, blue jean fibers are having on the environment and marine life. For now, there are steps you can take to keep your jeans from shedding into the oceans, Athey advised on Twitter. You can wash your jeans less frequently, get a filter for your washing machine and buy your jeans used.

Good question! Our study shows jeans are a prime & personal example of how far reaching the impact of our wardrobes can be. Consumers can:
– Wash jeans less (manufacturers suggest ~1x/mo)
– Use washing machine filters
– When looking for a new pair of jeans, opt for 2nd-hand/used

“While we certainly need more research to fully understand the effects, we also have ample evidence right now to act,” Nicholas Mallos, senior director of the Ocean Conservancy‘s Trash Free Seas Program who was not involved with the research, told WIRED.