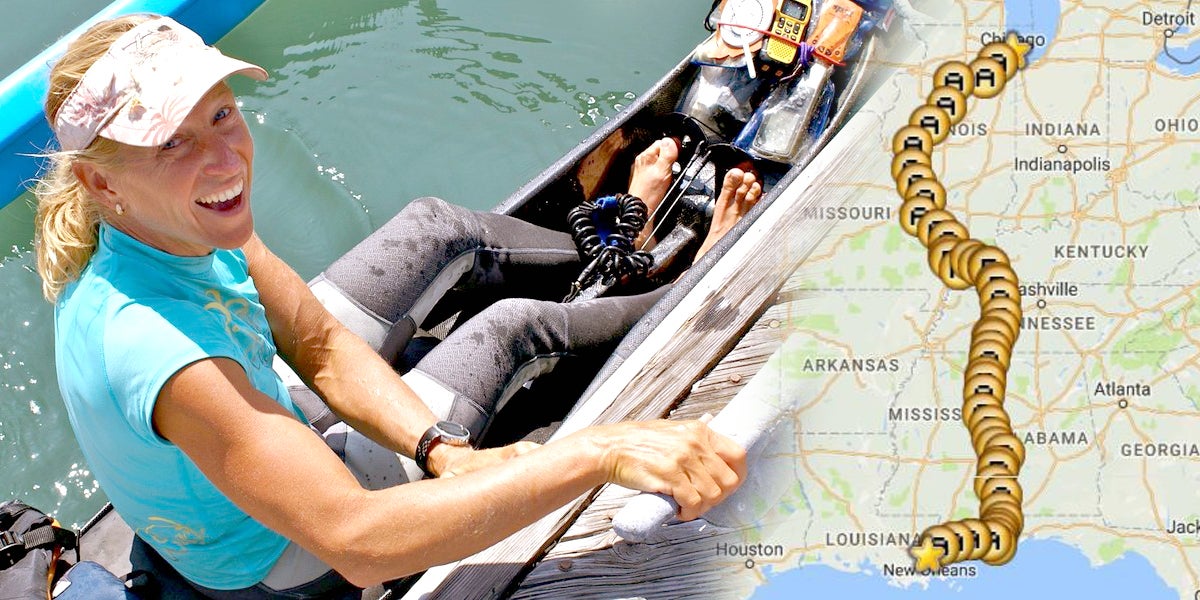 A New Jersey native and mother of two has set off on a two-month paddling journey from Chicago to New Orleans to raise awareness about water quality issues. 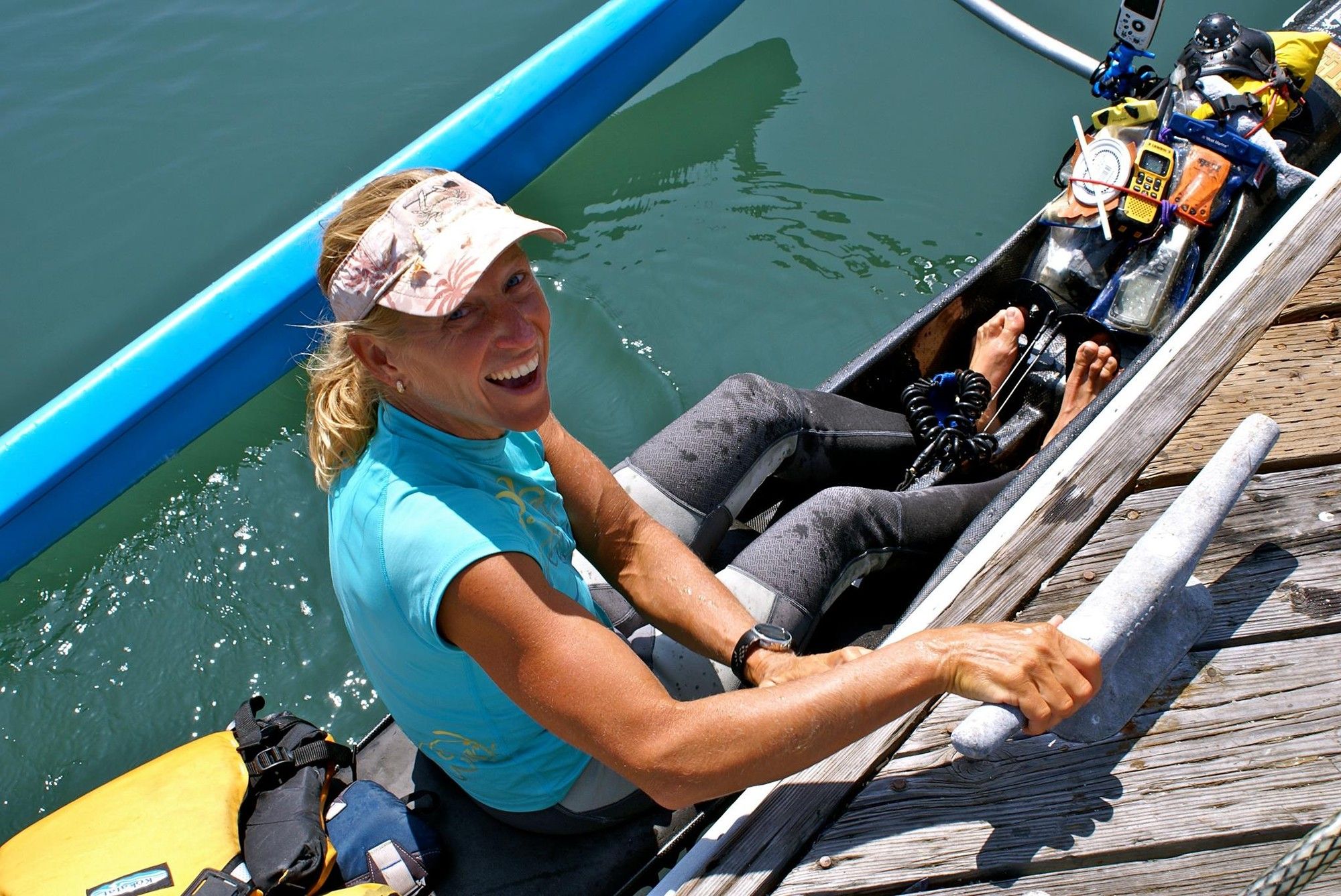 Blue Frontier Ocean Explorer Margo Pellegrino set off via the Sanitary Canal on her 20-foot outrigger canoe on Aug. 10 from the Lincoln Park Boathouse in Chicago.

This downstream-upstream challenge will first take her from the Windy City into the Mississippi. Then, she’ll traverse upstream on the Illinois River into Kentucky Lake and onto the Tennessee River and the Tenn-Tom Waterway. From Mobile, Alabama, she will paddle into the Mobile Bay and head west into New Orleans.

“This adventure for our water, our rivers, our ocean, our bays/estuaries has begun,” she wrote about Day 1 of her 8-week trip. “It certainly won’t be an earth shattering movement, won’t rock the world, but it’s very much another drop in the ocean of worker bees striving to make our watery world a better place. It’s what I can do, so with the help of many many hands along the way, prayers from friends and family, I’m doing it.”

To underscore how epic the voyage will be, traveling the 927 miles to New Orleans from Chicago by car would take at least 13 hours of straight driving. 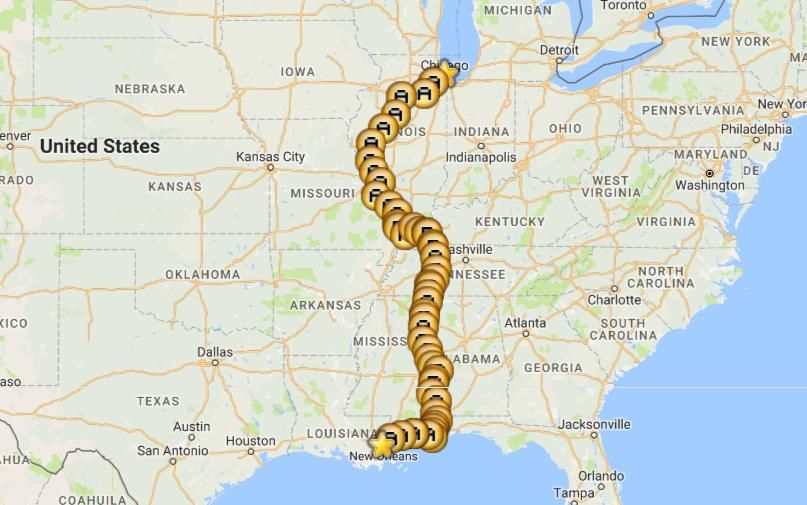 Incredibly, Pellegrino’s current trip is actually the second leg of her two-year “The Big Apple to The Big Easy” journey. For the past three summers in a row, Pellegrino has paddled extreme distances from one city to another. In 2015, she paddled from New York City to Chicago via the Hudson River, the Erie Canal and the Great Lakes. In 2014, she paddled from Trenton to Newark.

To date, the ocean activist has paddled more than 5,000 miles of the nation’s coast. For her current campaign, she has helped Blue Frontier raise roughly $11,500 towards a $30,000 target to go towards conservation efforts.

According to Blue Frontier, Pellegrino and her logistics and communications crew are hoping to raise public awareness to problems affecting our waterways. Along the way to her destination, Pellegrino and her team will be holding a number of community events so people can learn why clean water, and the people whose jobs and health depend on it, should be a nationwide issue. You can see tentative landing dates here.

“Margo’s paddle is OUR paddle,” Blue Frontier states on its website. “Together we can educate the public and our elected officials, and show them that there is a growing constituency for our water—from our watersheds into our rivers, lakes, and bays, to our ocean.”

Pellegrino is passionate about water quality issues such as run-off, the threat of single use plastics and how rising sea levels and intense rain affects riverfront/coastal communities.

In a blog post, Pellegrino also highlighted why clean water and healthy coastlines and riverfronts must be a 2016 election issue:

“In order to help our ailing ocean, please help me make water and climate change an election year priority. We need an honest debate and serious attention to these issues, as the consequences are nipping at our heels. To do any less is a dereliction of duty to protect the people and property of this great nation. We need to know now, before we cast those ballots, how our future president will address these crisis level issues.”

The adventurer took time during her epic paddle to answer some of EcoWatch’s questions via email.

Q. In terms of training, what do you have to do to prepare for such a long journey?

A. I try to paddle as much as possible, run, bike, anything, theoretically anyway, though I have to admit, my training was a little lean going into this. Fortunately, I also paddle with the Philadelphia Outrigger Canoe Club so I made sure I made as many team practices as I could.

Q. Have you ever felt deterred by crazy weather or other obstacles along the way? What keeps you motivated to keep paddling?

A. Conditions have shut me out on occasion, but once I’m started from point A I’m pretty determined to get to point B. So far I’m going into my fifth day of paddling, and am just happy I’ve been able to stay on target with the distances and destinations. Friday with the storms and rains and two locks in a big miles day was a definite challenge, but I’m pretty focused on the schedule. I think sticking to a schedule helps build momentum and enthusiasm for this crazy way to bring attention to the plight of our nations water-our rivers and our ocean. I also want to stick to a schedule so I can get home in two months! You do miss the family, after all, and my son is going to start high school. I’m a little sad about missing his first month, but at least we can call.

Q. Have you always been an extreme distance paddler/When did you start? How did you get involved in it?

A. No, but I’ve always like paddling for longer than many of my friends. One of whom bit me on the arm when I refused to turn around our aluminum canoe to go home. That was in high school. But serious long distances I haven’t done before, not before ’07 when I paddled from Miami to Maine.

Q. What are some must-have items that you bring with you on your extreme paddling trips?

Q. Was there a particular “aha” moment where you became passionate about water issues?

I’ve always been aware of water issues. I grew up hearing about Love Canal, reading Rachel Carson’s Silent Spring and have kept fresh water fish. I get tinge need for clean water. You can collapse your tank if you have too many fish and you don’t change the water. When my father died in ’04 and we were helping my mom clear out some of his stuff, I stumbled across an article in, I forget which science mag, about our collapsing ocean. That combined with David Helvarg’s 50 Ways to Save the Ocean, jump started my activism. How can you not try to do all you can do to help fix things? There’s no “unknowing.” And when you KNOW about a problem, then the next step is to DO something. So I’m trying in this crazy way, to get folks to see the problem, and put pressure on their elected officials and agency heads to DO something.

Q. In your own words, can you explain to me why this election year is especially important in terms of water and environmental issues?

A. It is off the charts how important this election year is. Our nations water is in crisis. Look at Flint. That disaster to save money and switch Flints water source to the corrosive water of the Flint River is case in point. The DIRTY WATER accelerated and exacerbated the problem we have everywhere of lead in our pipes. On this paddle, I can’t tell you how many times I WISHED I could hop in the water to cool off. This is my hottest paddle ever, but I didn’t dare hop in for those first few days. And, the simply despicable, inexcusable unsanitary Canal out of Chicago blows my mind. How anyone finds that acceptable is beyond me. Our nations water is in crisis, from our drying rivers like the Rio Grande to our ailing coastal waters and our ocean, we have got to do something. Aging sewer plants, agricultural run-off, polluting industry, plastic pollution … it all needs to be addressed.

We need to be asking our elected officials about where they stand on our nations water, both salty and fresh because this impacts everyone’s lives and businesses. Clean water is an economic driver. The Outdoor Industry says that outdoor recreation brings in $646 billion a year.

Q. Who are your environmental heroes (and why)?

A. David Helvarg, president and founder of Blue Frontier, is one. He’s gotten the grassroots active wth his Blue Vision Summit. He jump started the “seaweed rebellion” by helping smaller groups network and more effectively come together to maximize their voice. Sylvia Earle, Jacques Cousteau and my local friend Joel Fogel of Water Watch International who has been nonstop since the 70’s and before are up there as well.

Q. Where’s the most memorable place you’ve paddled and what made it so special?

A. The Pacific Northwest. Something about its heaviness—there is definitely somethings primal, connected to our ocean and Earth, mysteriously spiritual, wild, I don’t know. But I love that place … Washington, Oregon and Northern California. You can be a wild human animal there. You hafta rely on your intuition out on those waters. My other favorite place is South Jersey—our own lost coast of the Delaware Bayshore and our back bat marshy areas like Motts Creek (which has a GREAT little bar except they hafta use all disposable stuff because of their septic).

Q. How do you practice an environmentally friendly lifestyle?

A. Hahaha … only have beer at Mott’s Creek Inn! Or bring your own utensils but there’s probably some stupid New Jersey reg about that … But seriously, use LESS and BUY LESS of everything. Get OUT more, especially to your local waterways/ocean. And hopefully it’s clean water you have access to.

Q. What is an easy way for people to help out with your cause? If there’s one thing you wish you could tell people about your current campaign what would it be

A. Sign my petition, sign up for David Helvarg’s “Blue Notes” at Bluefront.org, try to use as little plastic as possible, get OUT and play in some body of water, and consider making a donation and/or hosting me and Chelsea, my logistics manager/ground team, if we happen to be coming in your neck of the woods.

You can track Pellegrino’s current whereabouts here or on social media with the hashtag #CHI2NOLA.