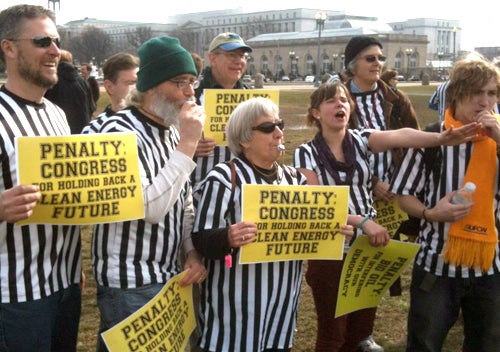 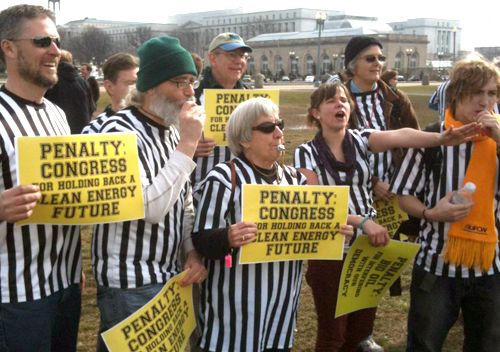 On Tuesday, Jan. 24, as Washington readies for the annual State of the Union address, more than 500 people in referee outfits are converging on Capitol Hill to “blow the whistle” on Congress. Why? Consider these two facts:

1. The American people believe (rightly) that Members of Congress are more responsive to their campaign donors than to their own constituents.

Americans are sick of watching Congress receive bribes from the fossil fuel industry to vote for scams like the Keystone XL pipeline and fossil fuel subsidies.  We see what’s happening, and we’re declaring it out of bounds and unsportsmanlike from this point forward.

The five biggest oil companies alone have made more than $1 trillion in profits over the last decade. It’s absurd that these companies still demand, and still receive, handouts from Congress paid for by taxpayers. This isn’t about energy or jobs—it’s about greed and corruption.

Listed below is some useful information about the cycle of dirty energy money corruption going on in Congress.

(All data is from Oil Change International’s Dirty Energy Money campaign which uses public data made available by the Center for Responsive Politics.)

Since 1999, the coal, oil and gas industries have shelled out more than $93 million to current members of Congress.

The trend is increasing with each election cycle, and current members of Congress took more than $25 million in campaign contributions from the oil, coal and gas industries in 2009-2010.

Through October of 2011, dirty energy interests had given this Congress $7.8 million in this cycle alone.

Speaker Boehner has received the most money from the fossil fuel industry during this term, with more than $287,000 received from the oil, gas and coal industries.

It is worth noting that direct contributions to candidates are only one way that the fossil fuel industry exerts influence. Substantially larger sums of money are mobilized by SuperPacs and other entities.

Each year that the president has submitted a budget, it has included eliminating $4 billion in annual subsidies to the dirty energy industry. Each year Congress has been unable to eliminate the subsidies.

In a vote in May of 2011, the reason was clear. Senators who voted to preserve subsidies took an average of five times more dirty energy money than those who voted to stop handouts to the oil industry.

In October of 2011 a large coalition called on the Super Committee to eliminate $12 billion annually in fossil fuel subsidies.

Our tax dollars also fund billions in fossil fuel projects around the world, via institutions like the World Bank and the US Export-Import Bank.

Earlier this month, American Petroleum Institute President Jack Gerard threatened President Obama with “huge political consequences” if he rejected the Keystone XL pipeline. This threat was unusual only because it was public, but the industry clearly continues to implicitly threaten all of our elected Representatives.

In July, the House of Representatives voted on the Keystone XL pipeline. Those Representatives who voted for the pipeline received 513 percent more from the oil and gas industry than those who voted against it.

In December, the House held another vote with similar results. Members of Congress who supported the measure have received $41 million from the fossil fuel industry, while those who voted against the bill have received only about $8 million from oil, gas and coal interests.

An analysis by ThinkProgress of lobbying disclosure records for the first, second, and third quarters of 2011 suggests that the lobbying expenses of the 20 or more business and labor interests who backed the project was $60 million compared to $1 million by the seven organizations that actively opposed the measure.

TransCanada’s lobbying efforts alone over the first three quarters of 2011 totalled $920,000, just under the total amount spent by its opponents..

Buying Congress is a great investment for the oil, gas and coal industries.  During the last two year cycle, they put in $25 million, and they got out at least $4 billion annually—$8 billion. In other words, for every $1 that the fossil fuel industry invests in Congress, they get at least $320 back.