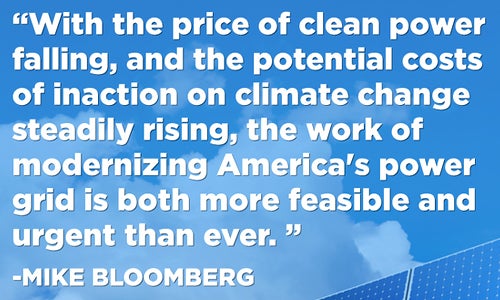 Bloomberg Philanthropies and the Heising-Simons family announced today the launch of a Clean Energy Initiative that will support state-based solutions to establish an American energy systems that is clean, reliable and affordable.

The $48 million initiative will provide grant funding to a broad range of stakeholders with the goal of creating a stronger, cleaner energy system that will improve air quality and reduce the health and economic impacts of climate change. The initiative will encourage utilities to adopt technologies that are now as or more affordable than traditional fossil fuels. “Since 2010, solar energy prices have plummeted by 80 percent, wind energy prices have been cut in half, and the cost of LED lighting has fallen by 80 percent,” according to a Bloomberg Philanthropies press statement.

“With the price of clean power falling, and the potential costs of inaction on climate change steadily rising, the work of modernizing America’s power grid is both more feasible and urgent than ever,” said Michael R. Bloomberg. “Pollution from power plants takes a terrible toll on public health, and it’s the biggest contributor to our carbon footprint. But smart investments can reduce it while also strengthening local economies. These grants will help states meet new federal clean power requirements in ways that save money and lives.”

Mark Heising added, “The science on climate change makes it abundantly clear that carbon pollution poses a deep threat to society, to agriculture, and to nature—and that early action is required to avoid these threats. New technologies ensure that the solutions to climate change can be cost-effective. This initiative is designed to accelerate those solutions.”

More than two dozen state and local partners—including the Institute for Energy Innovation and Respiratory Health Association—will receive more than half of the Bloomberg Philanthropies grant funding. Support will also be provided to national organizations including the Center for the New Energy Economy, Environmental Defense Fund and Natural Resources Defense Council.

“Climate change is here and now,” said Rhea Suh, Natural Resources Defense Council president. “Tackling this central environmental threat of our time is an enormous task, but it’s also a tremendous opportunity. The Bloomberg Philanthropies and Heising-Simons Clean Energy Initiative will help America reinvigorate our economy and protect future generations from the dangers of climate change.”

The Clean Energy Initiative will help states implement the U.S. Environmental Protection Agency’s Clean Power Plan, proposed rules to cut carbon-dioxide emissions from existing power plants. With support from the Clean Energy Initiative, states will have the funding to develop their own strategies to limit carbon pollution and ultimately reach the goal of cutting carbon pollution from the power sector by 30 percent below 2005 levels.

“I’m grateful to Bloomberg Philanthropies for its support,” said Environmental Defense Fund President Fred Krupp. “The Clean Energy Initiative will propel smart, cost-effective reduction of carbon pollution from the biggest source, power plant smokestacks. We know how to make affordable clean energy. This initiative will speed the day when turning on a light doesn’t mean dirtier air or a legacy of dangerous climate change for our children.”

Reducing carbon emissions will also have a tremendous impact on human health. Joel Africk, president and CEO of the Respiratory Health Association in Chicago, shared his excitement for the funding initiative. “Bloomberg Philanthropies’ Clean Energy Initiative is a big step forward for public health,” said Africk. “Not only will the initiative help cut carbon and curb climate change, it will also result in fewer asthma exacerbations, heart attacks and strokes throughout the U.S.”