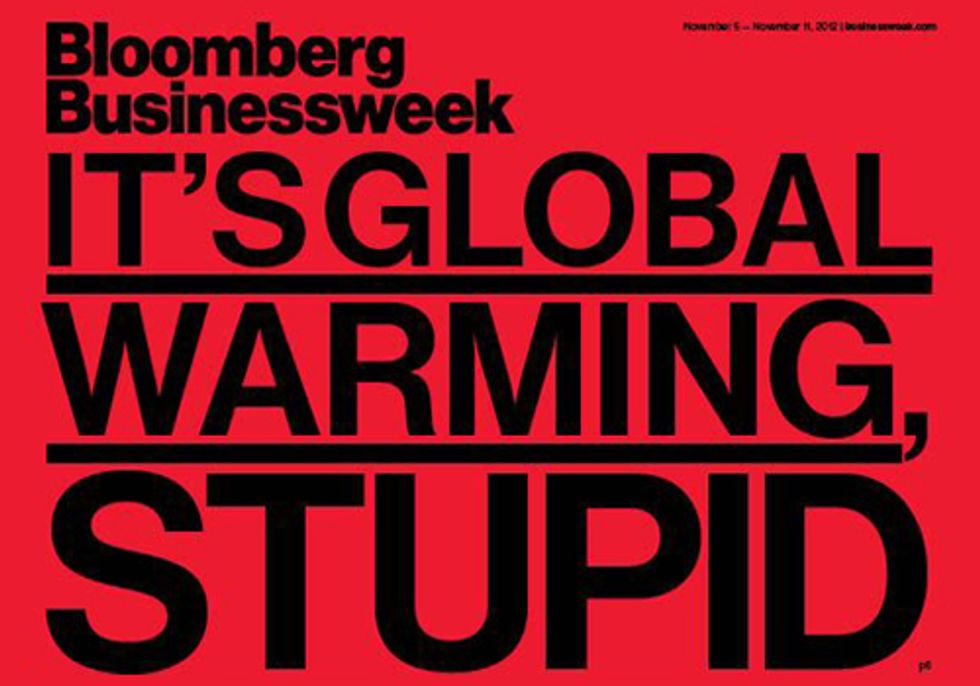 The cover of the year goes to Bloomberg Businessweek, “It’s Global Warming, Stupid.”

Bill Clinton famously campaigned on the slogan, “It’s the economy, stupid.” Upwards of $50 billion damages from the Frankenstorm Sandy—which was made far more destructive by manmade climate change—underscores the point that it will be increasingly difficult to separate the economy from how we respond to (or fail to respond to) global warming.

Yes, yes, it’s unsophisticated to blame any given storm on climate change. Men and women in white lab coats tell us—and they’re right—that many factors contribute to each severe weather episode. Climate deniers exploit scientific complexity to avoid any discussion at all.

Clarity, however, is not beyond reach. Hurricane Sandy demands it: At least 40 U.S. deaths. Economic losses expected to climb as high as $50 billion. Eight million homes without power. Hundreds of thousands of people evacuated. More than 15,000 flights grounded. Factories, stores, and hospitals shut. Lower Manhattan dark, silent and underwater.

The piece goes on to provide much-needed clarity—and our favorite climate metaphor:

An unscientific survey of the social networking liter moodature on Sandy reveals an illuminating tweet (you read that correctly) from Jonathan Foley, director of the Institute on the Environment at the University of Minnesota. On Oct. 29, Foley thumbed thusly: “Would this kind of storm happen without climate change? Yes. Fueled by many factors. Is storm stronger because of climate change? Yes.” Eric Pooley, senior vice president of the Environmental Defense Fund (and former deputy editor of Bloomberg Businessweek), offers a baseball analogy: “We can’t say that steroids caused any one home run by Barry Bonds, but steroids sure helped him hit more and hit them farther. Now we have weather on steroids.”

In an Oct. 30 blog post, Mark Fischetti of Scientific American took a spin through Ph.D.-land and found more and more credentialed experts willing to shrug off the climate caveats. The broadening consensus: “Climate change amps up other basic factors that contribute to big storms. For example, the oceans have warmed, providing more energy for storms. And the Earth’s atmosphere has warmed, so it retains more moisture, which is drawn into storms and is then dumped on us.” Even those of us who are science-phobic can get the gist of that.

If all that doesn’t impress, forget the scientists ostensibly devoted to advancing knowledge and saving lives. Listen instead to corporate insurers committed to compiling statistics for profit.

On Oct. 17 the giant German reinsurance company Munich Re issued a prescient report titled Severe Weather in North America. Globally, the rate of extreme weather events is rising, and “nowhere in the world is the rising number of natural catastrophes more evident than in North America.” From 1980 through 2011, weather disasters caused losses totaling $1.06 trillion. Munich Re found “a nearly quintupled number of weather-related loss events in North America for the past three decades.” By contrast, there was “an increase factor of 4 in Asia, 2.5 in Africa, 2 in Europe, and 1.5 in South America.” Human-caused climate change “is believed to contribute to this trend,” the report said, “though it influences various perils in different ways.”

Global warming “particularly affects formation of heat waves, droughts, intense precipitation events, and in the long run most probably also tropical cyclone intensity,” Munich Re said. This July was the hottest month recorded in the U.S. since record-keeping began in 1895, according to the National Oceanic and Atmospheric Administration. The U.S. Drought Monitor reported that two-thirds of the continental U.S. suffered drought conditions this summer.

Kudos to Bloomberg Businessweek for their being as blunt as many climate scientists have become (see Lonnie Thompson on why climatologists are speaking out: “Virtually all of us are now convinced that global warming poses a clear and present danger to civilization”).