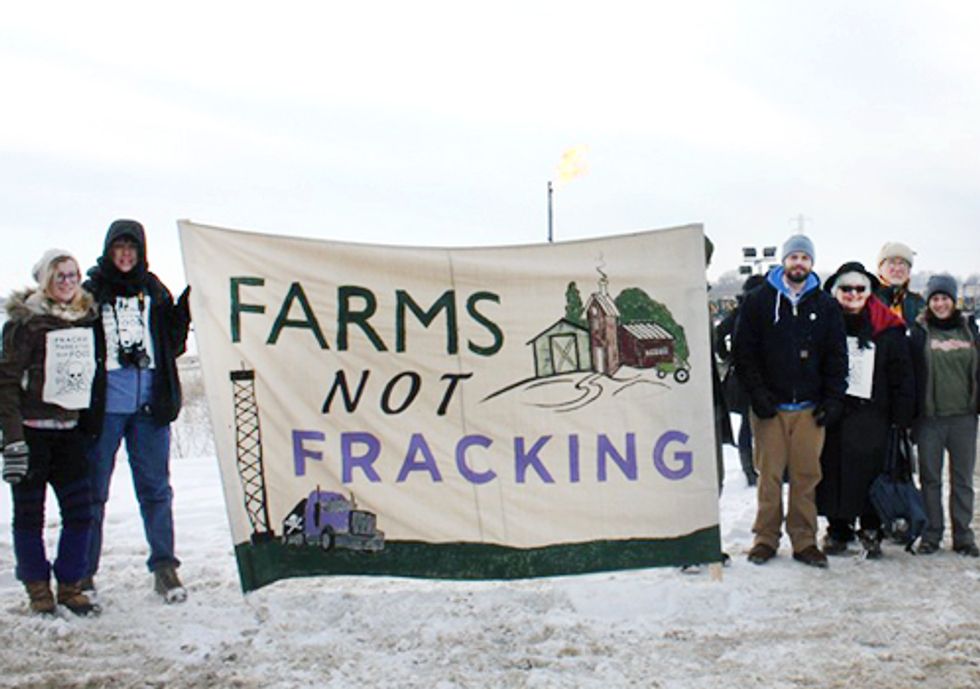 Residents of Western Pennsylvania and friends of Lawrence County farmer Maggie Henry locked themselves to a giant paper-mache pig today in the entrance to a Shell natural gas well site in order to protest the company’s threat to local agriculture and food safety. The newly-constructed gas well is located at 1545 PA Route 108, Bessemer, PA , 16102, less than 4,000 feet from Henry’s organic pig farm.

The farm has been in the Henry family for generations and has been maintained as a small business despite pressure from industry consolidation. The Henry’s made a switch from dairy to organic pork and poultry production several years ago as part of their commitment to keeping the operation safe and sustainable for generations to come. Joining Maggie Henry at the well site are residents from other Pennsylvania counties affected by natural gas drilling and Pittsburgh-area residents of all ages who support Henry’s fight. Many are customers who buy her food at farmers’ markets and grocery stores who do not want to see the integrity of their food source compromised.

The Henry farm is especially vulnerable to the risks associated with fracking because it is located in an area riddled with hundreds of abandoned oil wells from the turn of the 20th century. According to hydro-geologist Daniel Fisher who has studied the area, “Each of these abandoned wells is a potentially direct pathway or conduit to the surface should any gas or fluids migrate upward from the wells during or after fracking."

Methane leaks from gas wells have been responsible for numerous explosions in or near residences in Pennsylvania in recent years. Migrating gas and fluids also threaten groundwater supplies, on which Henry and her animals depend for their drinking water. Last summer a major gas leak in Tioga County, PA caused by Shell’s own drilling operations, produced a 30 foot geyser of methane and water, which spewed from an unplugged well and forced several families to evacuate.

The nine foot tall pig is stationed in the driveway of the site with four protestors chained to its' legs, obstructing traffic to and from the site. The protestors are wearing signs that read, “Fracking Threatens Food” and “Protect Farms for Our Future.” A couple dozen supporters are also on the scene.

Nick Lubecki, one of the protestors locked to the pig, recently started a farm of his own in Allegheny County. He worries about the future of agriculture in Pennsylvania, which is the state’s number one industry. “It is extremely disturbing as a young farmer to have to worry about the safety of the water supply in a chaotically changing climate while these out of state drillers have the red carpet rolled out for them. In a few years the drillers will all be gone when this boom turns to bust like these things always do. I don’t want to be stuck with their mess to clean up."

Prior to this action, Henry exhausted all avenues to prevent or shut down the well through the legal system. Supporters of her farm have also held previous protests at the site. Despite the heightened risks posed by the abandoned wells in the area, Shell is moving forward with their operations, and Maggie’s supporters have turned to nonviolent civil disobedience.