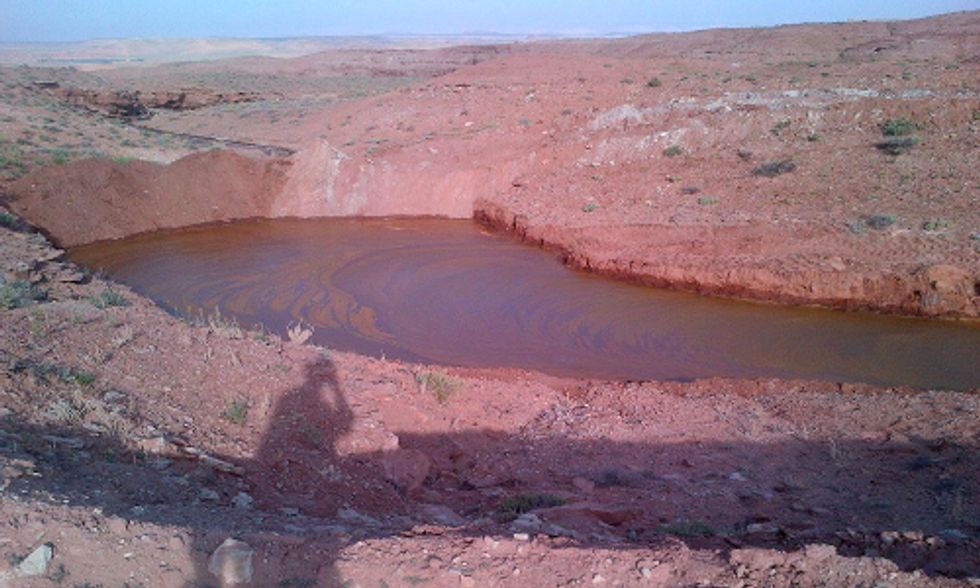 A rainstorm two days later flooded the area, overrunning inadequate containment ponds housing the oil, thereby dumping thousands or perhaps tens of thousands of gallons of oil directly into the Green River. No known sampling of downstream water supplies has been performed, raising criticism from residents across the region.

“It’s offensive to hear the BLM say they’re ‘pleased’ after a large quantity of oil entered the water supply for millions of people,” said Zach Frankel, executive director of the Utah Rivers Council. “The BLM failed the public and it’s high time to acknowledge their mistakes instead of greenwashing this pollution. They should be warning the public about exposure to this oil, instead of pretending its not there.”

The incident is an embarrassment for state and federal officials including the BLM and the Utah Division of Oil, Gas and Mining since just the day before the rainstorm they pronounced the spill "contained." Utah BLM Director Juan Palma issued a press release May 22 saying: “We were able to catch this incident and act quickly to contain the leak and minimize the potential impacts to the environment.”

But 30 hours later, the poorly-­designed oil ponds, which had not been built to withstand a storm, overflowed during a forecasted rainstorm, dumping perhaps thousands of gallons of oil into the water supply for millions of residents. The weather forecast for the area indicated rainstorms were likely to occur but no information has been presented as to why these containment structures were not designed to withstand a storm.

Because the river is running very high due to spring runoff (12,000 cubic feet per second), oil was not observed on the water’s surface when state and federal officials arrived on the scene 12 to 18 hours later. Water samples were collected there but no one thought to travel downstream to collect more samples.

“Even a child would look at the swollen Green River and know the oil had moved quickly downstream,” said John Weisheit, Colorado Riverkeeper. “Its absolutely ridiculous no one traveled downstream to look for oil."

Instead, officials presumed little oil had entered the river and issued statements to the Utah press claiming very little oil had spilled into the Colorado River water supply. This claim was clearly in the best interest of the oil company and avoided embarrassment to the BLM and Utah officials who are on the eve of hosting a large Energy Summit on June 4 to court energy companies to invest in Utah energy development.

But an amateur photographer 30 miles downstream took a photo of a giant plume of oil in the Green River. Witnesses watched oil flow past for three straight hours until they finally left the area. Perhaps most startling about the image is that it was taken 1,000 feet above the river yet it clearly shows oil stretching from one bank to the other. The photo evidence is stark contrast to statements made by state and federal officials downplaying the significance of the pollution, who had no idea the photo existed before May 28.

"Las Vegas residents should be concerned because Utah is experiencing an oil boom right now, thereby assuring that more of these spills will occur in the future,” said Tim Wagner with the Sierra Club in Salt Lake City. “Clean drinking water is at the bottom of Governor Herbert’s priority list who is hosting an Energy Summit next week to court more dirty energy development in Utah."

The oil could reach Lake Mead in a matter of weeks, although no one knows for certain. No word yet as to whether rafters and other recreationalists who drink from the river in Canyonlands National Park and the Grand Canyon have been warned of the oil spill or not.

"This pattern of cavalier mistakes and media denials on the part of Utah officials in handling this oil spill is troubling” said Peter Nichols, national director for the Waterkeeper Alliance. “It is a true sign of things to come considering Utah's 'open for business' policy for dirty energy projects. This incident makes it clear that the residents of Las Vegas and Los Angeles cannot trust Utah officials to keep their water supply clean," said Nichols.