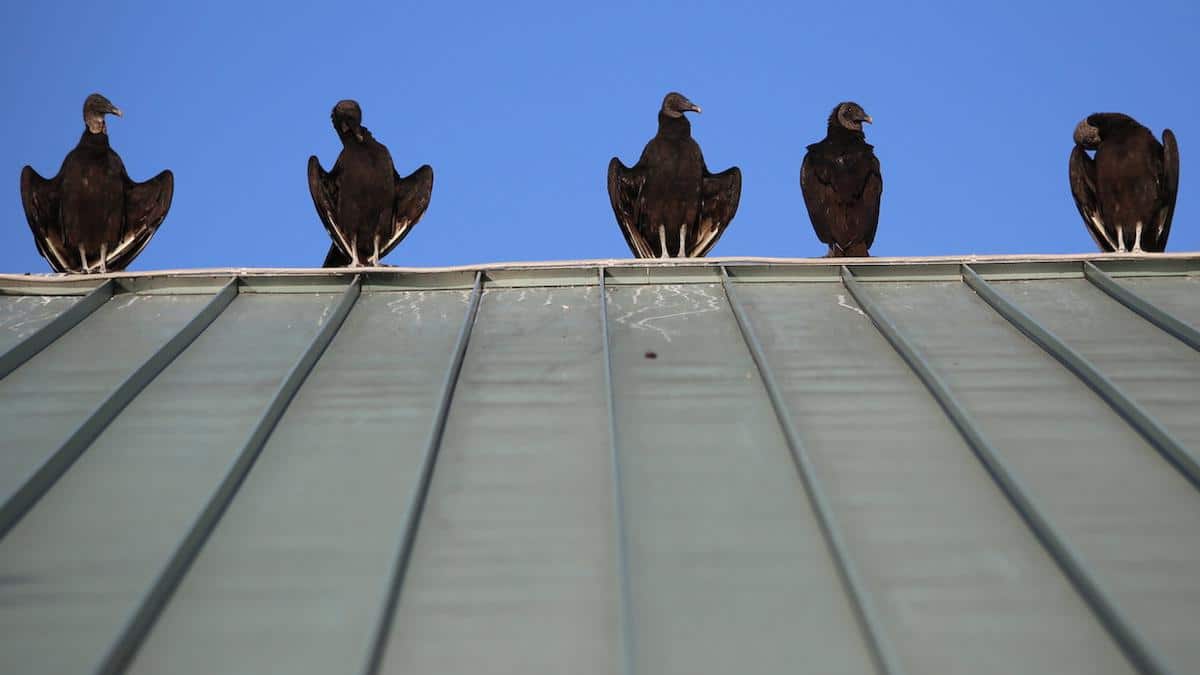 Black vultures like these are settling en masse on roofs and trees in a Pennsylvania town. cuatrok77 / Flickr

A town in southeastern Pennsylvania is facing an unusual infestation. Black vultures are settling on roofs and trees, defecating profusely and causing thousands of dollars in property damage.

The vultures have been seen in Marietta, Pennsylvania before, but this year the problem has become more extreme, local resident John Enterline told the LNP Dec. 3.

“This is the worst year,” Enterline told the paper. “There are many more of them.”

The vultures are a problem for residents for two reasons. First, they poop everywhere, turning the trees they roost on white. Second, they like to tear at roof shingles and rubber roofing. Enterline said he had paid several thousand dollars to repair his roof after the vultures settled there.

“They have a fetish with rubber,” Bob Schutsky of the Lancaster County Bird Club told LNP, “but it’s not well understood.”

Yet while black vultures are a menace to Marietta homeowners, they are also a conservation success story. A federal law passed in 1918 protected them from being shot for feathers, and the banning of DDT and other pesticides protected them from the ill-effects of these chemicals. Between 1966 and 2014, their population increased, according to The Cornell Lab of Ornithology. Their range has also expanded, most likely because of an increase in roadkill and temperature changes caused by the climate crisis.

They also were not always perceived negatively. In the 1800s, they were seen as helpful scavengers and allowed to feast on the outskirts of meat markets in the southeastern U.S.

Now, black vultures retain their protection, which means they can only be killed with a federal permit, the New York Daily News explained. Marietta has not sought a lethal solution yet. Instead, residents try to harass the birds by banging pots and pans or lighting fireworks. Pennsylvania director with the U.S. Department of Agriculture’s Wildlife Services department Harris Glass told the LNP that these measures were more than 90 percent effective.

Homeowners can also apply for permission to display a taxidermied black vulture, which tends to scare away live birds, but they can cost hundreds of dollars.

Black vultures live between the eastern and southern U.S. and South America, according to Cornell. They have shorter wings and tails than turkey vultures, but their bodies are about the same size, and they have been known to scare turkey vultures away from food, according to the Audubon Society.

The vultures tend to prefer warmer roosting sites in winter that keep them safe from predators and close to food, which is likely why they settle on Marietta’s roofs.