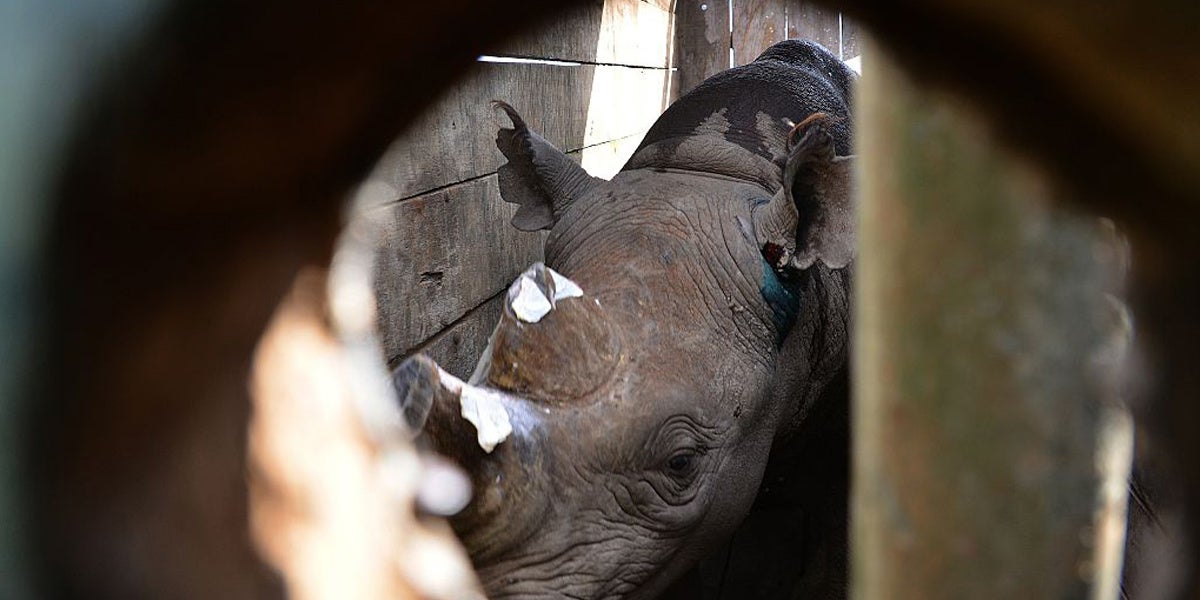 A captured black rhino peeps from a cage during a relocation exercise from Lake Nakuru National Park. AFP / Getty Images

Ten out of 11 black rhinos have died in recent weeks following a botched relocation attempt from Nairobi and Nakuru National Parks to Tsavo East National Park.

The only rhino to survive the translocation was subsequently attacked by lions, tourism minister Najib Balala said Thursday. Earlier reports said the rhino was recovering after the attack but it appears to have died as well.

In a statement released Monday, the Kenya Tourism Federation expressed “deep concerns and sadness in regards to the unprecedented tragic death of 11 Rhinos in the recent translocation exercise.” The International Rhino Foundation confirmed Tuesday that the 11th rhino died after the lion attack as well.

Pursuit for the poachers is underway, KWS said.

“Our teams on the ground spent the night pursuing the #poachers and are continuing with the #operation,” the authorities tweeted.

Our teams on the ground spent the night pursuing the #poachers and are continuing with the #operation. pic.twitter.com/CZjUQAq6OS

Tourism minister Balala set up an independent inquiry team to investigate the circumstances of the deaths.

“According to the Inquiry team, the cause of all the deaths was due to multiple stress syndrome intensified by salt poisoning and complicated by the following conditions: dehydration, starvation, proliferation of opportunistic bacteria in upper respiratory tract (Pasteurella species), gastric ulcers and gastritis,” Balala said in a July 26
statement.

The statement continued: “The independent inquiry further showed there were areas of clear negligence that occurred post-translocation at the release site in Tsavo, especially in the holding BOMA at the sanctuary. These included poor co-ordination and communication among officers that were responsible for pre-translocation studies, including biomass assessments; environmental impact assessments and water quality assessments. The results of the water assessments were hardly considered before execution of the operation.”

The tourism ministry is facing intense public criticism over the rhino deaths. Balala suspended six KWS officers following the inquiry team report’s and is facing calls for his own resignation.

Black rhinos are under threat from poaching, habitat loss and political conflict. There are roughly 5,000 left on the planet. Kenya is home to about 750 of the remaining individuals.