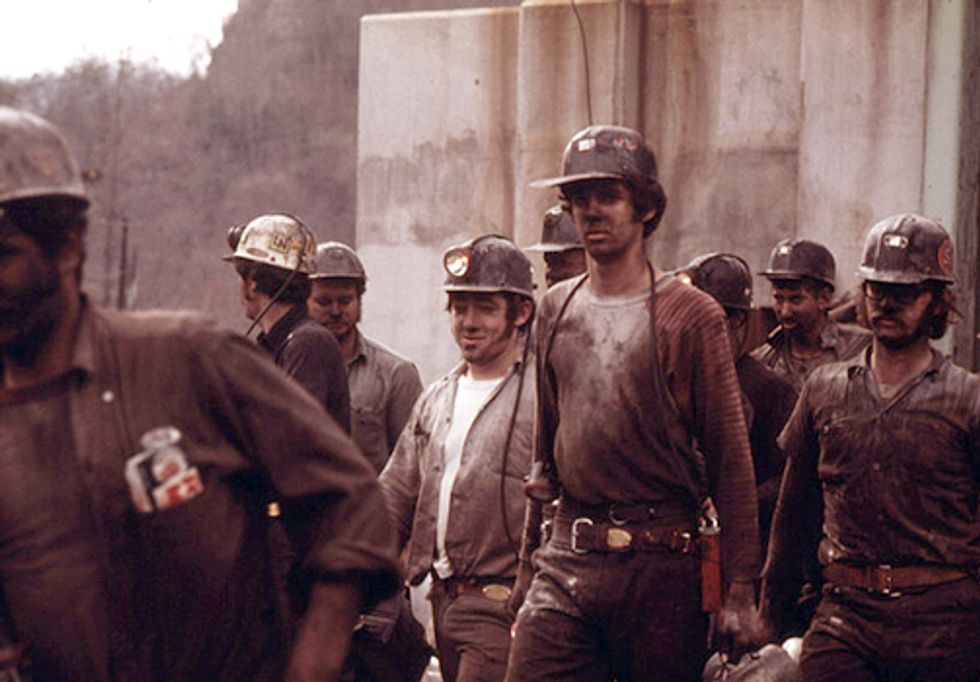 Miners just leaving the elevator shaft of Virginia-Pocahontas Coal Company Mine #4 near Richlands, Virginia in April, 1974. Photo courtesy of Flickr.

In what could possibly be a new low for one of the most anti-environment, pro-dirty energy industry Congresses in history, Republicans in the U.S. House of Representatives are attempting to gut funding for measures that would reduce the occurrence of black lung in mine workers. The funding cut was inserted into the 2013 appropriations bill that provides funding to the Department of Labor, the Department of Education and the Department of Health and Human Services.

The language inserted into the appropriations bill reads:

SEC. 118. None of the funds made available by this Act may be used to continue the development of or to promulgate, administer, enforce, or otherwise implement the Lowering Miners' Exposure to Coal Mine Dust, Including 20 Continuous Personal Dust Monitors regulation (Regulatory Identification Number 1219-AB64) being developed by the Mine Safety and Health Administration of the Department of Labor.

Republicans on the House Appropriations Committee inserted the language into the bill. The Appropriations Committee is currently led by Republican Chairman Harold 'Hal' Rogers from Kentucky and, not surprisingly, his largest campaign financier during his 20-plus years in office has been the mining industry. That industry has pumped more than $379,000 into his campaigns over the years, according to Center for Responsive Politics data. DirtyEnergyMoney.org shows Rep. Rogers receiving more than $430,000 in polluter contributions since 1999, well above the average for members of Congress. The majority of the dirty money has come from the coal industry.

The new rule would prevent workers and the industry from monitoring the levels of coal dust that workers are exposed to. This could not come at a worse time, as recent studies show that diagnoses of black lung have been on the rise in recent years. According to Media Matters for America, a decade ago the rate of black lung among miners with more than 25 years of experience was only about 4 percent. Today, that number is close to 10 percent of long-term workers with more than 25 years on the job.

Media Matters also echoed a report from iWatch News, which detailed the ways in which the current monitoring system—the very system that House Republicans are attempting cut back even further—is designed in a way that allows the industry to game the system:

The disease's resurgence represents a failure to deliver on a 40-year-old pledge to miners in which few are blameless, an investigation by the Center for Public Integrity and NPR has found. The system for monitoring dust levels is tailor-made for cheating, and mining companies haven't been shy about doing so. Meanwhile, regulators often have neglected to enforce even these porous rules. Again and again, attempts at reform have failed.

A Center analysis of databases maintained by the federal Mine Safety and Health Administration found that miners have been breathing too much dust for years, but MSHA has issued relatively few violations and routinely allowed companies extra time to fix problems.

The mining industry for years has been attempting to make it more difficult for workers to hold companies liable for diseases caused by exposure to coal dust. During the Bush administration, the coal mining industry attempted to sue the government to repeal a law that made it easier for doctors to prove a diagnosis of black lung for lawsuits. Before that law, the mining companies were able to delay lawsuits for years by requiring plaintiffs to get as many medical opinions from different sources as the industry wanted.

In addition to the efforts by the industry, Republicans in Washington have also been trying to reduce oversight and liability with regards to preventing black lung.

It is estimated that as many as 70,000 miners, since the 1970’s, have died from black lung, with an average of about 1,500 miners dying from the disease every year. The mining industry has already paid out roughly $45 billion to victims and their families.