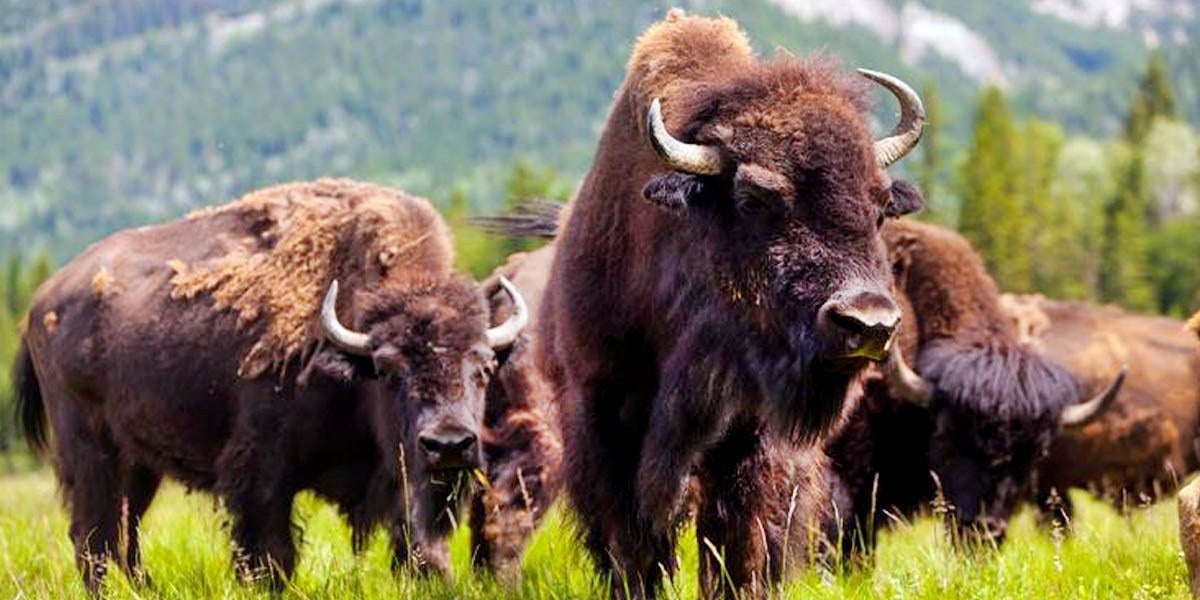 Immense herds of up to 30 million bison once thundered across the plains of North America. Like their American brethren, overhunted Canadian plains bison came dangerously close to extinction in the late 1800s. In an effort to reverse the damage, Parks Canada on Feb. 1 successfully restored 16 healthy bison—transporting them the 280 miles from Elk Island National Park, 30 miles east of Edmonton, Alberta, to their original, rightful home on the eastern slopes of Banff National Park.

This is the first step in a five-year pilot project to reintroduce the animals to the Banff wilderness. For 16 months, this initial little herd—consisting of six two- to three-year-old bulls and 10 two- to three-year-old pregnant heifers—will be kept in an enclosed pasture in Banff’s Panther Valley. Project Manager Karsten Heuer and his team at Parks Canada expect that, after having twice calved, they will release the herd into a larger, 1,200 square kilometer (463 square mile) zone in summer 2018. There, they will be free to interact with other native species and to forage for food. The idea, said Heuer, is “to anchor these initial animals to this new landscape, so they adopt it as their new home and range.”

In 2022, Parks Canada will reevaluate the project and, if long-term bison restoration to the area is deemed feasible, develop a management plan from there. “If we didn’t think there was a good chance of this working I don’t think we ever would have started,” Heuer said, acknowledging that if necessary for population control, Parks Canada may ultimately have to consider pulling animals out and allowing for hunting. In that case, he said priority would be given to local First Nations groups (as Canada’s indigenous peoples are known), and is careful to add, “But that’s not the emphasis—our intent isn’t to create a population for hunting opportunities.”

Once a key source of food, clothing, shelter, and religious symbolism, bison carry great spiritual and cultural meaning for the First Nations. With the 19th-century massacre of the bison herds came the end of an entire way of life. In fact, so significant is the bison to the North American and indigenous story that in recording the continent’s past, historians tend to differentiate between “bison” and “post-bison” eras.

The emblematic plains animals were once a “keystone species” in Banff, said Heuer. Bringing them back will help restore the ecological integrity of the Canadian great plains, referred to locally as “the prairies.” Depending on how well the Banff bison herd survive and reproduce, wolves, which once relied on bison herds as a primary food source, will be able to do so once again. Other species would benefit, too—hulking, woolly bison graze heavily on native grasses and disturb the soil with their hooves, triggering an ecological process that helps many plant and animal species flourish. Prairie dogs, for instance, prefer to make their homes in or near bison-grazed areas, as the short grass affords a lookout for hungry predators.

Indigenous groups—many of which have played a role in bison reintroduction projects on both sides of the U.S.-Canada border—express uniform enthusiasm for the Banff initiative. Independent of government efforts, many have formed pro-reintroduction alliances. In 2014, eight nations (or tribes) signed a Buffalo Treaty in Montana, which commits signatories to bison restoration. Other nations have since signed on. In September 2016, the American Bison Society held their fifth annual week-long conference in Banff, marking their first summit in Canada. Upon February’s announcement of bison reintroduction in Banff, Leroy Little Bear, a Blood Tribe member integral to the Buffalo Treaty, told the Calgary Herald, “The restoration of wild bison to Banff National Park is a great leap forward for buffalo peoples.”

https://twitter.com/EcoWatch/status/740653475982389249 called the Pink Mountain Herd, there are no other plains bison populations in North America that actually are interacting with the full suite of native predators.”

Heuer reports that working on the reintroduction project with various representatives from First Nations was “invigorating” for all parties. “I think part of the reason why our translocation went as well as it did… is because with the First Nations partners, there was a lot of spiritual preparation. We had numerous blessing ceremonies.” On Jan. 29, the Samson Cree Nation hosted a send-off ceremony at Elk Island National Park, and several other First Nations celebrated the bison’s return to Banff, too.

Nonprofit conservationists are also excited about the Banff reintroduction. “One of the things national parks are supposed to do is to conserve our ecological heritage,” said wildlife ecologist Dr. Jodi Hilty, president of Yellowstone to Yukon Conservation Initiative, a joint Canada-U.S. nonprofit organization that connects and protects wildlife habitats. “And that includes ensuring that all the species that should be there are persisting, now and into the future. In the case of bison, they’re ‘ecosystem engineers,’ if you will. They actively impact the landscape.”

Not everyone, however, is so effusive. Local ranchers initially worried that the bison could escape from their current enclosure, damage property, or spread disease to livestock. Members of the Alberta Fish and Game Association (AFGA) were also strongly opposed, arguing in 2015 that “the experiment is ill-founded, has no environmental integrity and has little value to Canadians.” However, Parks Canada has done due diligence in terms of disease testing and quarantining, and representatives have met with both AFGA and the Alberta Beef Producers to alleviate their concerns, even committing to slaughtering the herd if necessary. However, Heuer and his team hope it won’t come to that. “It’s taken a lot of time,” he said, “and we finally have hooves on the ground.” For now, Parks Canada observes and monitors the bison. After a period of managing the animals in such heavy-handed fashion, Heuer said the hope is that the herd will ultimately revert to bison’s “tremendous wild instincts.”

As the old cliché goes, it is only once we’ve lost something that we realize how valuable it was. The Banff project, along with other wildlife reintroductions—such as the recent scimitar-horned oryx in Chad or the Iberian lynx in Spain—offer multi-pronged opportunities: a chance to make amends for past mistakes, and an occasion to make a solid commitment to the future of the planet.

“It’s fairly high-cost to try to bring something back what you’ve already lost,” noted Heuer, adding that such endeavors are also labor-intensive. “By far, the more efficient and better approach… is to maintain the land’s ecological integrity so that you don’t have to restore it. I would really caution people from going down the road of thinking, ‘You know, it’s no big deal if we lose things because we have the power and the technological prowess to bring them back.'”