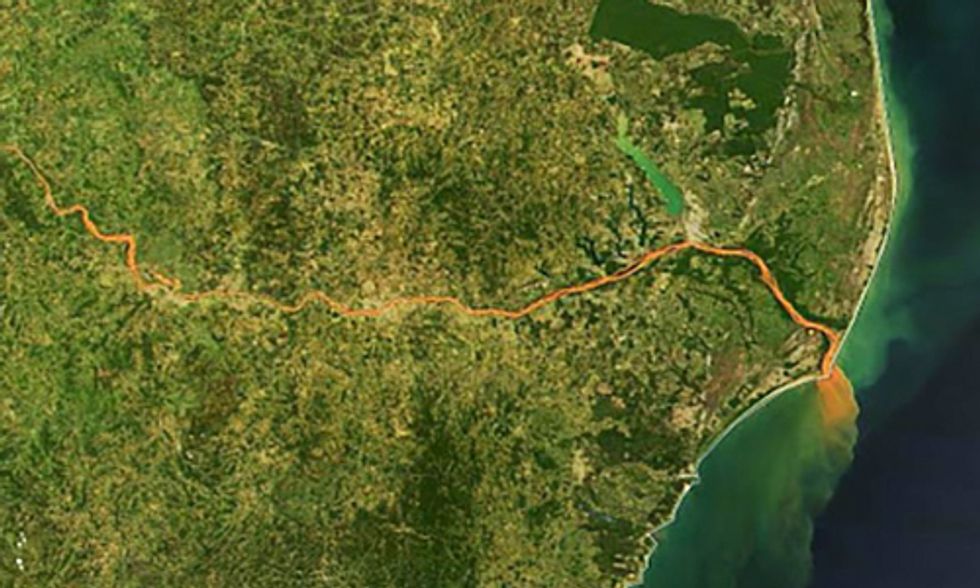 On Nov. 5, 2015, a mine-waste dam collapsed at an enormous iron mine in southeastern Brazil. The wave of toxic waste was at least twice the volume of the Johnstown Flood and wiped out buildings and bridges more than 40 miles downstream. Using post-spill satellite imagery and Google Earth, we have produced a bird's-eye view of the devastation wrought by the deluge of arsenic-laced sludge.

During the spill, we reported extensively on the immediate aftermath visible on satellite imagery, the remaining threat of a possible second dam failure (which thankfully did not materialize) and by looking back in time with historical satellite imagery, documented the increase of waste in the impoundment behind the failed Fundão Dam. We also wrote about how frequently these kinds of disasters occur around the world.

The video above was created using Google Earth, comparing pre-spill imagery with images collected on Nov. 9 and Nov. 11. Our analyst Christian delineated the extent of the mine waste from a lake 70 miles downstream of the mine, all the way up to the town of Bento Rodrigues, the damaged Santarem Dam and the failed Fundão impoundment (skipping a section of the river with cloudy imagery). Even further downstream, more than 400 miles away, the Rio Doce ran orange for months afterwards.

The confluence of the Rio Doce and the Atlantic over three months after the disaster on Feb. 10, as seen by MODIS/Terra.

Now the Brazilian government is seeking $44 billion in damages, likening the disaster to the ecological devastation of the oil spilled in the 2010 BP/Deepwater Horizon disaster. A police investigation recently concluded that Samarco Mineração, a joint venture of Vale SA and BHP Billiton, was "more than negligent" in overlooking structural failings and continuing to push for more production.

What is even more alarming is that studies have shown a correlation between the frequency of tailings dam incidents and downturns in commodity prices decrease and the height of dams is soaring around the world as mines produce more and more waste.