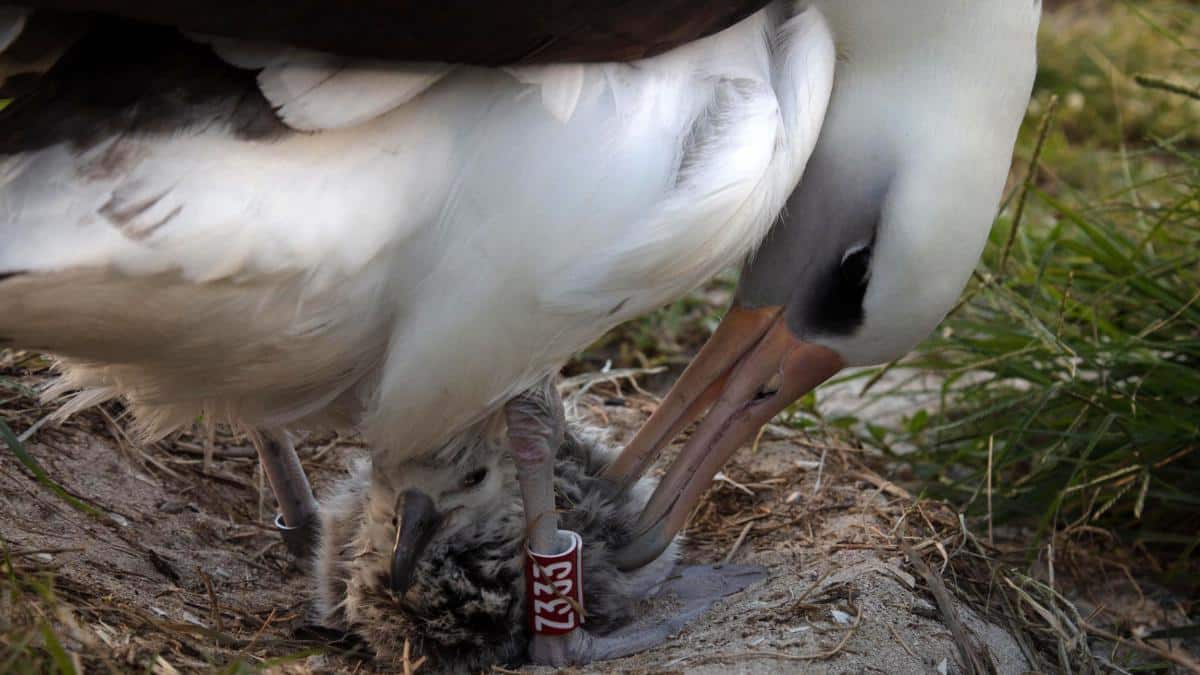 Wisdom hatched her latest chick on Midway Atoll National Wildlife Refuge and Battle of Midway National Memorial, home to the world’s largest albatross colony where millions of birds return each year to nest in the same place and, usually, with the same partner.

“Each year that Wisdom returns, we learn more about how long seabirds can live and raise chicks,” Dr. Beth Flint, U.S. Fish and Wildlife Service (USFWS) biologist, said in a USFWS Pacific Islands post announcing the birth. “Her return not only inspires bird lovers everywhere, but helps us better understand how we can protect these graceful seabirds and the habitat they need to survive into the future.”

Wisdom, a mōlī (Laysan albatross) and world’s oldest known, banded wild bird is at least 70 years old. Biologists estimate she has had at least 30-36 chicks. https://t.co/cjM8X2clme

Laysan albatrosses typically live 12 to 40 years, BBC News reported. Wisdom, however, was first banded in 1956 by biologist Chandler Robbins, according to The Guardian. She has gone on to outlive him and likely her first mate. In that time, she has also hatched 30 to 36 chicks, according to USFWS. Since at least 2012, her mate has been a male albatross named Akeakamai.

“At least 70 years old, we believe Wisdom has had other mates,” Flint said. “Though albatross mate for life, they may find new partners if necessary — for example if they outlive their first mate.”

Wisdom is among the 70 precent of mōlī that nest on Midway Atoll, one of the oldest atoll-type islands in the world, located at the northern end of the Hawaiian island chain. In addition to mōlī, nearly 40 percent of kaʻupu (black-footed albatross) and endangered makalena (short-tailed albatross) breed there, along with more than 20 other bird species.

Albatrosses arrive on the atoll beginning in October. Their eggs hatch around January or February following a 65-day incubation period, and the baby birds begin to fly in June or July. Wisdom laid this year’s egg in late November. The Midway gathering can be a family reunion of sorts. In 2018, she nested a few feet away from a chick she had in 2011.

Albatrosses hatch one egg at a time, but don’t lay eggs every year.

“Because she only nests every two years, the international bird community looks forward to see if she’s been able to come back and nest,” Sean Dooley, BirdLife Australia’s national public affairs manager, told The Guardian. “The odds are stacked against them so much, whenever it happens it’s always a cause for celebration.”

“The changes in water temperate and the changes in currents in water and winds means… the extent they have to fly to find food increases as their prey species seek out colder water — it’s a big looming threat that sea birds are facing, albatross in particular,” Dooley explained.

Feeding their chicks can also be dangerous. Male and female albatrosses share incubation and feeding duties, USFWS noted. To feed their young, the birds catch squid and fish eggs that are rich in fatty acids and regurgitate them into their chicks’ mouths. However, sometimes the parents bring home plastic instead, the Smithsonian reported:

Many birds accidentally eat plastic and other marine debris floating in the ocean, mistaking it for food. But the problem is intensified in Laysan albatrosses because of the way they catch fish, squid and other seafood: by skimming the surface of the water with their beak. Along the way, they accidentally pick up a lot of floating plastic, which they then feed to their chicks. Adults can regurgitate plastic they’ve swallowed, but chicks are unable to, so it fills up their stomachs.

Photographer Chris Jordan took shocking photographs of albatross chicks whose stomachs were full of plastic, and went on to make a film about the birds.

“There’s something so archetypal about these legendary birds and seeing bright colors of ocean plastic against dead sterility is a powerful symbol for our human culture right now. We’re in a state of emotional bankruptcy,” Jordan told The Guardian in 2018.

It is hard to know exactly how much plastic impacts the birds. Lead poisoning poses another threat to Laysan albatross chicks on Midway, the Smithsonian reported, so it can be difficult to determine their cause of death. However, more than 97 percent of dead albatross chicks found on Midway in recent years had plastic in their stomachs, according to The Guardian.