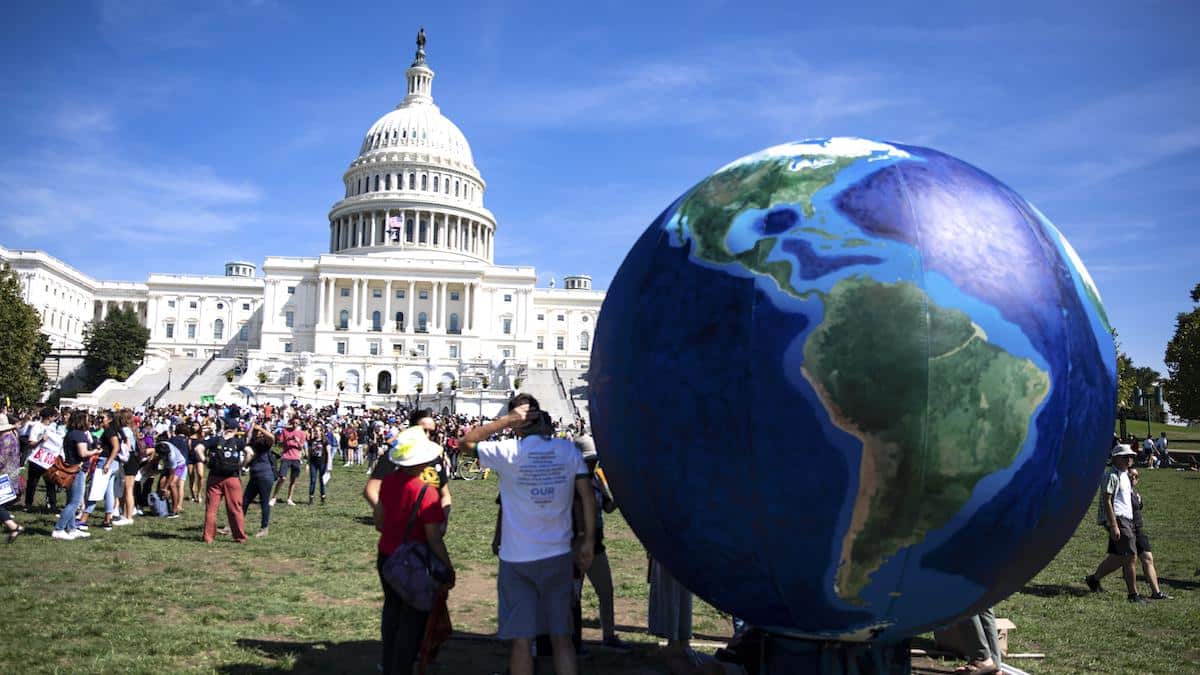 Environmental activists on the west lawn of the U.S. Capitol during the Global Climate Strike rally on Sept. 20, 2019 in Washington, DC. Samuel Corum / Getty Images

In an era of extreme political polarization, opportunities for bipartisan efforts on climate change may seem impossible, but a recent introduction of rare climate legislation, authored by Republican and Democratic senators, could pioneer future agreements.

Coons said this year’s wildfires and storms are a “reminder of how climate change is impacting our lands – and a clear signal that we need to act now to protect them for future generations,” in a press release.

Nature-based climate proposals like the one trillion tree initiative reflect “an acknowledgment by some in the Republican Party of rising voter demand for action on climate change, even as it seeks to preserve the economic benefits of a historic drilling boom that has made the United States the world’s biggest oil and gas producer,” Reuters reported.

Inspired by a July 2019 study in Science, The Trillion Trees and Natural Carbon Storage Act understands ecosystem restoration to be one of the most effective climate mitigation strategies, based on the study’s finding that an extra 0.9 billion hectares of canopy cover could store 205 gigatons of carbon in places that support forests.

The bill also supports the 1t.org One Trillion Trees Initiative, a World Economic Forum initiative that aims to plant one trillion trees worldwide by 2030, announced in January 2020. President Donald Trump affirmed his support for the international initiative early this year, despite his public history of climate skepticism, stating he wanted to show “strong leadership in restoring, growing and better managing our trees and our forests,” the World Economic Forum reported. In October, the president signed an executive order which established a council responsible for the federal government’s involvement in the international initiative.

The proposed legislation introduced by Braun and Coons last week seeks to make the U.S. a leader in the One Trillion Trees Initiative. It also aims to resolve the government’s limited capacity to “enact a bipartisan conservation policy” and simply put “utilize one of the most effective tools to sequester greenhouse gas emissions,” according to the bill’s one-page summary.

In doing so, The Trillion Trees and Natural Carbon Storage Act would require the USDA to establish objectives for increasing the net carbon stock of various ecosystems.

In their blog, the Environmental Defense Fund supports this objective, saying the bill could shift focus away from exclusively placing a commercial price on ecosystem harvests and instead give additional value to an ecosystem by including its abilities to mitigate climate change.

The bill also allocates million to the USDA Forest Nursery Revival programs to supply seed and samplings for increased planting and establishes a non-profit organization, the International Forest Foundation, to encourage private donations for international reforestation.

While similar proposals have faced criticism from environmentalists who state planting more trees is not a sufficient strategy to combat the climate crisis and does little to limit fossil fuel production, legislation like this “is a sign that congressional Republicans may be willing to strike deals on climate with President-elect Joe Biden after he takes office next month,” according to a report by The Washington Post.

The proposed legislation comes at a time when Democrats lead the House by a narrow margin and a Senate majority remains undecided until January, potentially making it difficult for any climate legislation enacted by the Biden administration to pass.

“The window of opportunity for bipartisan climate action opens wider every day,” Elizabeth Gore, senior vice president for Political Affairs of the Environmental Defense Fund said in a blog. “The time to act is now, and EDF congratulates Sens. Braun and Coons on their efforts to work collaboratively and effectively.”

Emily Denny is a freelance writer and graduate of UC Berkeley with degrees in environmental policy and English literature. Her concern for climate issues stems from growing up on the rural northwest coast and she hopes her reporting can connect small communities to a global conversation on climate.