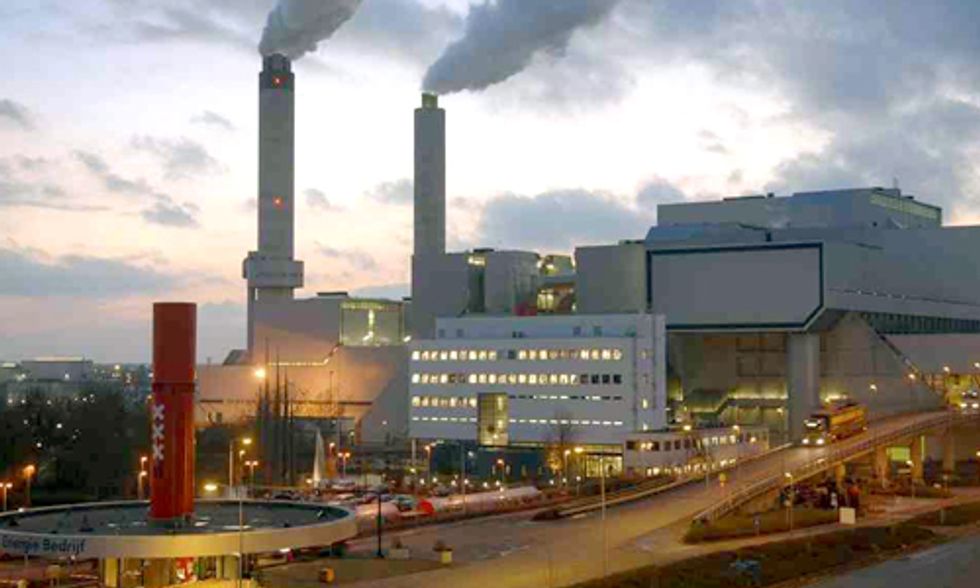 Biomass electricity generation, a heavily subsidized form of “green” energy that relies primarily on the burning of wood, is more polluting and worse for the climate than coal, according to a new analysis of 88 pollution permits for biomass power plants in 25 states.

The report found that although wood-burning power plants are often promoted as being good for the climate and carbon neutral, the low efficiency of plants means that they emit almost 50 percent more CO2 than coal per unit of energy produced. Photo credit: Global Justice Ecological Project

Trees, Trash, and Toxics: How Biomass Energy Has Become the New Coal, released this week and delivered to the U.S. Environmental Protection Agency (EPA) by the Partnership for Policy Integrity (PFPI), concludes that biomass power plants across the country are permitted to emit more pollution than comparable coal plants or commercial waste incinerators, even as they are subsidized by state and federal renewable energy dollars. It contains detailed emissions and fuel specifications for a number of facilities, including plants in California, Connecticut, Florida, Georgia, Hawaii, Kentucky, Maine, Massachusetts, New Hampshire, New York, Oregon, Pennsylvania, South Carolina, Texas, Virginia and Washington.

“The biomass power industry portrays their facilities as ‘clean,’" said Mary Booth, director of PFPI and author of the report. “But we found that even the newest biomass plants are allowed to pollute more than modern coal- and gas-fired plants, and that pollution from bioenergy is increasingly unregulated.”

The report found that biomass power is given special treatment and held to lax pollution control standards, compared to fossil-fueled power plants.

Almost half the facilities analyzed, however, avoided using BACT by claiming to be “minor” sources of pollution that skim under the triggering threshold for stricter pollution controls. Minor source permits are issued by the states and contain none of the protective measures required under federal air pollution permitting.

The analysis also found that although wood-burning power plants are often promoted as being good for the climate and carbon neutral, the low efficiency of plants means that they emit almost 50 percent more CO2 than coal per unit of energy produced. Current science shows that while emissions of CO2 from biomass burning can theoretically be offset over time by forest regrowth and other means, such offsets typically take several decades to fully compensate for the CO2 emitted during plant operation. None of the permits analyzed in the report required proof that carbon emissions would be offset.

EPA rules also allow biomass plants to emit more hazardous air pollutants than both coal plants and industrial waste incinerators, including heavy metals and dioxins. Even with these weak rules, most biomass plants avoid restrictions on the amount of toxic air pollution they can emit by claiming to be minor sources, and permits usually require little testing for proof of actual emissions. When regulated as a minor source, a facility is not required to meet any limitations on emissions of hazardous air pollutants.

“Lax regulations that allow contaminated wastes to be burned as biomass mean that communities need to protect themselves,” said Mary Booth. “They can’t count on the air permitting process to ensure that bioenergy pollution is minimized.”