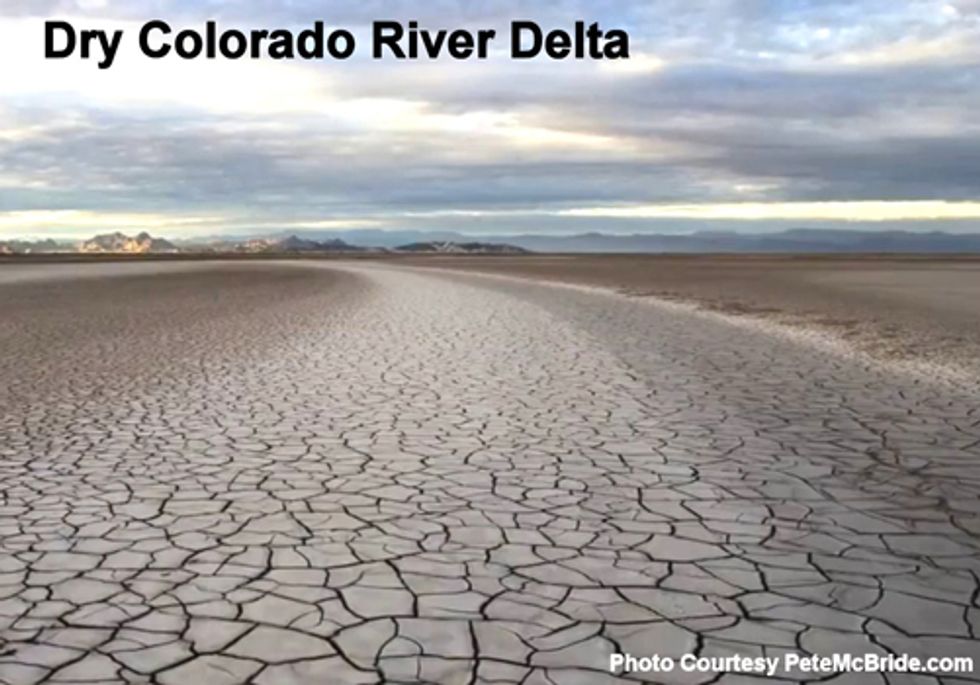 What happens when a river no longer runs to the sea?

In August 2010, my documentary film crew and I explored the Colorado River's dry riverbed from the Mexican border to its mouth in the Gulf of California as a part of our Expedition Blue Planet: North America project. What we witnessed was the eerie ghost of a mighty river that once carried water, rich silts and prosperity on its way to connect with the sea my grandfather Jacques-Yves Cousteau called “the world's aquarium" and the “Galapagos of North America." Sadly, with the exception of a few extraordinarily wet seasons, the nutrient-rich waters of the Colorado have not completed their journey to the sea in decades.

Along the way, we worked with leading scientists and met locals who told us about the birds, wildlife and trees that disappeared; about the once-abundant fish that no longer thrive; and a way of life that is vanishing with the fisheries. A land of forests and emerald lagoons just 80 years ago has become a salted mud flat and desert.

The explanation for this collapse is no mystery. Before it ever reaches the border with Mexico, 90 percent of the water in the Colorado is diverted for use by seven Colorado River basin states. At the border, Mexico's Morelos Dam diverts what's left to agriculture and cities like Tijuana and Mexicali. And after that, there is hardly a trickle left to keep critical natural systems operating across the once-rich riverbed. From the border to the sea, the Colorado is a river no more.

After the April 2010 Mexicali earthquake, which damaged local infrastructure and irrigation canals in northwest Mexico, the U.S. agreed to temporary storage of a small percentage of Mexico's allocation—water that Mexico could not use due to the earthquake damage—for the first time allowing our river partners to take advantage of storage behind U.S. dams.

Additionally, during a trial run of the Yuma Desalting Plant in Arizona, the two countries collaborated to protect critical wetlands at the internationally recognized 40,000-acre Ciénega de Santa Clara in Mexico. The Ciénega relies entirely on Colorado River water from agricultural drainage to form the last remaining wetland in the Delta and a critical habitat for millions of water birds and shorebirds. Deprived of life-giving flows during the pilot run, the Ciénega would have suffered irreparable damage.

The U.S. and Mexico are now negotiating a new cooperative agreement to improve Colorado River management. To accomplish a final U.S.-Mexico agreement, it is critical that both nations agree to provide basic flows to the disappearing Colorado River Delta. The conservation community urges Interior Secretary Ken Salazar and the Obama administration to see this pivotal agreement to completion as quickly as possible. Salazar has repeatedly demonstrated his mastery of collaborative alliance and we look forward to a successful outcome here.

At stake is water security for both nations. Most importantly it would establish more equitable management of water during droughts, reducing the impact of shortages on water users in both countries.

With a modest water supply, life will continue to flourish in the Delta and increasingly return along the river below the last dam. But our leaders must act together to bring back life-giving flows to the Colorado River Delta.

The time is now. Desert river deltas are famous for their diversity, and critical for all life along their pathways. The Colorado River Delta is the critical “waistline in the hourglass" of the Pacific Flyway, a major continental migratory route for birds. Its mud flats and estuary zone create an irreplaceable food stock for the fisheries that are an important source of income for communities throughout the region.

As a completed system, the Colorado River represents one of the most impressive and important mountains-to-canyons-to-sea natural corridors on our continent—one we'd be foolish and selfish to not preserve for our children. Without a thriving Delta, we trade away a natural system that supplies life and resiliency to both nations. In this election season of political rancor, it's important to keep pushing forward with this historic collaboration—to seal in water our promise to work together for a prosperous and vibrant future.