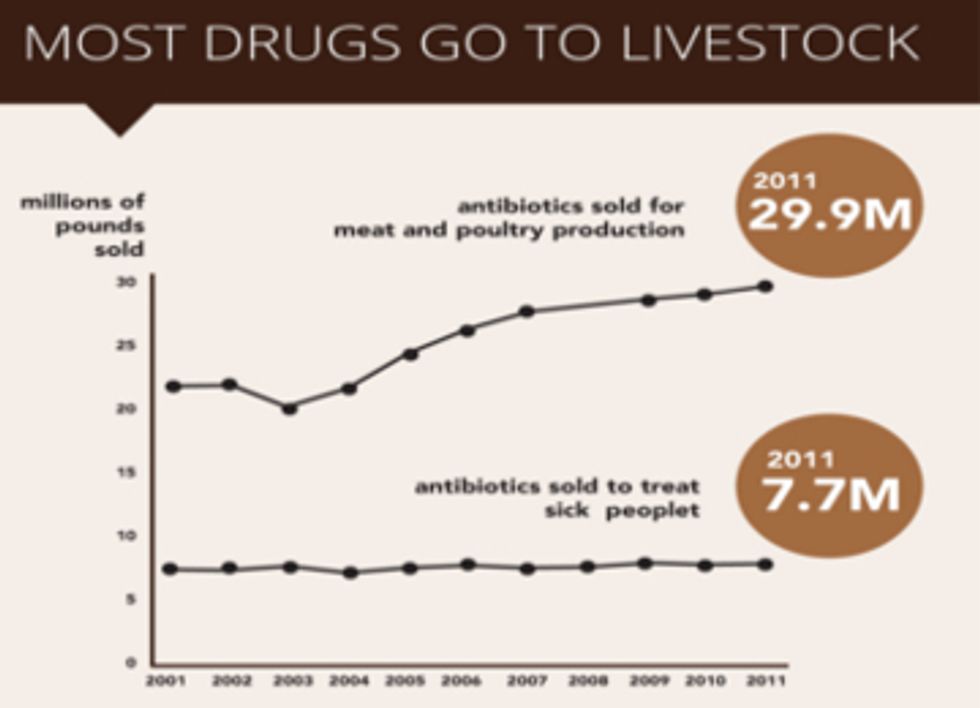 Each year millions of pounds of low-dose antibiotics are administered to animals—not to treat diseases, but as a way to speed up the animals’ growth. Pumping an excess of antibiotics into livestock increases the likelihood of bacteria becoming resistant to the drugs. This in turn, makes human illnesses less treatable. Because of antibiotic resistance, the director of the World Health Organization, Margaret Chan, says that someday, common illnesses such as strep throat could once again be fatal.

Recently, Sen. Feinstein (D-CA) introduced a bill, Preventing Antibiotic Resistance Act, which would require the Food and Drug Administration (FDA) to limit the use of unnecessary antibiotics in livestock. If it passes, farmers would only be able to use antibiotics to treat sick animals as prescribed by a veterinarian and not to make livestock grow faster or to compensate for overcrowded living conditions—as they currently do.

This bill is similar to one reintroduced in March in the House by Rep. Slaughter (D-NY), the Preservation of Antibiotics for Medical Treatment Act of 2013 (PAMTA). It also seeks to limit non-therapeutic use of antibiotics.

In April, the Environmental Working Group released a report that alerted the public to a quietly published federal study about “superbugs” in supermarket meat. The disturbing truth that the report publicized was that antibiotic-resistant bacteria have been documented on 81 percent of ground turkey, 69 percent of pork chops, 55 percent of ground beef and 39 percent of chicken breasts, wings and thighs.

This is especially alarming because studies show that by 2050, humans will double the amount of meat they eat to 1.2 trillion pounds a year. Starting with penicillin, dozens of new antibiotics were discovered in the twentieth century, but today the rate of discovery has slowed considerably, to the point that the emergence of newly resistant bacteria will far outstrip science’s ability to come up with replacements for antibiotics that become ineffective.

According to Pew Health Initiatives, in 2011 80 percent of all antibiotics used in the U.S.—nearly 30 million pounds—were used on food animals, not on humans. Yet current FDA recommendations for antibiotic use are only voluntary guidance, not regulations with the force of law.

In a time when antibiotic resistance is on the rise, now is the time for the FDA to regulate farmers’ non-medical use of antibiotics in livestock so essential drugs remain effective now and for future generations.