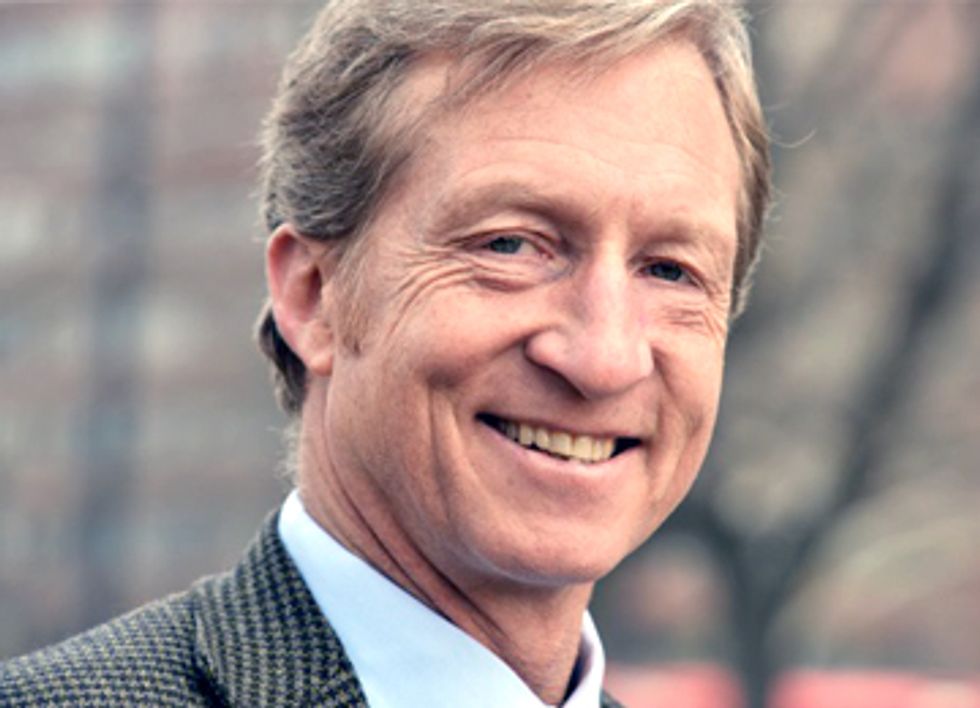 [Editor's note: Climate activist Tom Steyer, a California billionaire and founder of one of the largest hedge funds and Next Generation, has written an open letter to President Obama, calling on the Administration's rejection of the Keystone XL pipeline or face a targeted campaign before the end of June by those who re-elected him.]

With Friday’s announcement that the Canadian provincial government of British Columbia opposes the transportation of tar sands oil over their lands, the last of the arguments for the development of the Keystone Pipeline has collapsed.

It has been my belief all along that your Administration was not going to approve the Keystone Pipeline because it simply made no sense on the policy merits to allow a pipeline that would enable massive greenhouse emissions, do almost nothing for our economy and slow our own move to research-based advanced energy independence that will generate hundreds of thousands of American jobs. Now this announcement by British Columbia, coupled with the other information that has come out since the review of the project began, means the controversy should be over.

Over the last year, each of the policy arguments for the pipeline has cratered.

First fell the argument that the pipeline would support oil independence. The U.S. is now an exporter of oil, and the Keystone oil will be piped across the Midwest down to the Gulf of Mexico where it will then be shipped as a cheap source of energy to our economic competitors in Asia, including China. In fact, TransCanada, the company building the pipeline, refused to support guarantees that the Keystone oil would not be used for foreign export when asked by Congressman Ed Markey (D-MA) during congressional testimony in December 2011.

Second toppled the argument that the pipeline is good for the U.S. economy. The pipeline will generate profits, but profits overwhelmingly for foreign companies. The project will generate as much as $3.9 billion in additional revenue for foreign oil companies. Jobs, of course, are critical, but for the billions that the American people will generate for foreign oil companies, we will only get 35 permanent jobs in return. In fact, it appears that among the few Americans who would actually financially benefit from the building of the pipeline are the Koch Brothers (they have already been storing a toxic byproduct of Canadian tar sands oil at a location in Detroit, and in Canadian regulatory filings one of their subsidiaries declared that it had a “direct and substantial interest” in the construction of Keystone).

And now, the argument that the tar sands oil was going to be delivered across Canada if the U.S. pipeline was not permitted has been demolished. The contractor hired by the State Department to prepare its Keystone XL environmental impact review is reportedly under investigation for an alleged conflict of interest. Based on that contractor’s report, the State Department declared that there will be no significant greenhouse gas emissions from Keystone because the oil would be exported by other means if the pipeline were not approved. That argument was always a flimsy rationalization, but it has now been completely undermined by the decision of British Columbia to oppose a route through that province. This decision shows that our Environmental Protection Agency was right all along: Transporting tar sands from Canada through the Keystone Pipeline will significantly increase greenhouse gas emissions.

Given that none of the chief arguments being put forth by supporters of the pipeline remain standing, NextGen Action is going to be working with our friends and allies who are opposed to the development of Keystone XL to intensify our efforts in communicating what is the right policy choice to your Administration. On June 20, in Washington D.C. we will announce a campaign that will specifically focus on communicating to those Americans across the country who supported your re-election in 2012.