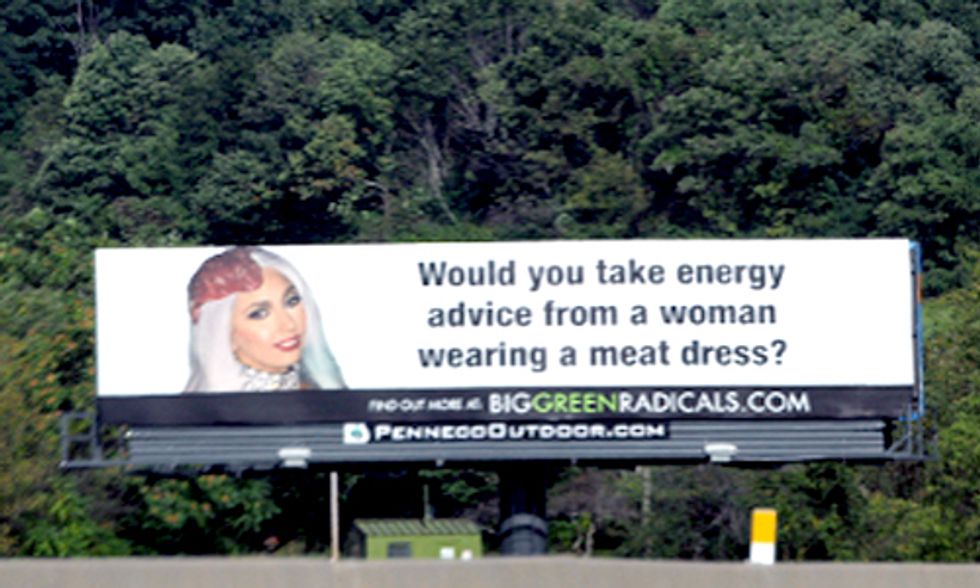 A head-scratching set of billboards has popped up along major highways in Pennsylvania. There's a photo of Lady Gaga sporting a jeweled choker and a slab of meat on her head. "Would you take energy advice from a woman wearing a meat dress?" it says. Another features Robert Redford with the caption: "Demands green living. Flies on private jets."

The billboards are signed BigGreenRadicals.com, and at first glance, you might suspect they were sponsored by a hardcore environmental group, calling out the hypocrisy of stars who advocate for the environment but don't walk the walk. Another, featuring Yoko Ono, that says "Would you take energy advice from the woman who broke up the Beatles?," is just baffling. While it made millions sad, the Beatles breakup did not have a noticeable effect on energy consumption.

But go to their website and you quickly learn who they are really fighting. They claim that sinister cabal of environmental groups is trying to destroy all we hold dear as fossil fuel-loving Americans by pushing (gasp) "the green agenda."

"Environmental activist groups have lobbied for stronger laws to protect the environment and public health since the 19th century," says the group.

But then it goes on to say, "While these organizations started out curbing real threats to our safety and the future of our planet, they have morphed into multi-million dollar lobbying machines that use questionable tactics to scare the American public and policymakers into supporting unnecessary and unreasonable policies. A web of wealthy foundations and individuals bankroll these radical activists, making the Sierra Club, the Natural Resources Defense Council and Food & Water Watch among the most powerful (and radical) voices pushing the green agenda."

It warns that these groups want to eliminate dirty energy and focus on renewable energy—also undeniably true—which they say "will eliminate the energy sources that provide 95 percent of our current electricity needs, raising prices dramatically and reducing reliability."

Big Green Radicals also has Greenpeace in its sights, saying it has evolved from "a loose group of anti-nuclear peaceniks into a big-moneyed organization has centered on using junk science to try to fundamentally change our way of life." And it's singled out the anti-fracking movement in Colorado as a target. It called the citizen-driven groups there "astroturf" groups—fronts for monied interests. You'll see how ironic that is in a few paragraphs.

The group produces articles like "New Poll Shows Majority of Americans Prefer Coal and Natural Gas Development." The poll, commissioned by the Environmental Policy Alliance, the group that created Big Green Radicals, prompts its respondents by asking if they think developing these resources is important for national security and telling them that limiting carbon emissions from coal could increase the cost of electricity per family by $1,000 a year.

Big Green Radicals also takes on the GMO labeling movement, claiming that if these groups succeed in their agenda of "trying to convince consumers to ignore the scientific consensus regarding the safety of genetically modified foods and scare the public and companies into reliance only on organic foods ... domestic food prices will rise, and we’ll lose the ability to develop new foods to feed vitamin-deficient citizens of developing countries."

Given our First Amendment rights, it's unclear why Big Green Radicals thinks a campaign of "trying  to convince" people of anything is out of bounds, since that's exactly what they're doing. And speaking of astroturf  groups, Big Green Radicals is a creation of the notorious right-wing public relations firm Berman & Co, which has created and operated dozens of front groups attacking minimum wage laws, paid sick leave, food safety regulations, labor, public schools and attempts to regulate smoking and drunk driving.

So why did Big Green Radicals chose this odd grouping of celebrities to attack? (Are people REALLY still mad at Yoko for breaking up the Beatles?) Gaga and Ono are part of a high-profile anti-fracking group in New York state called Artists Against Fracking which includes numerous celebrities in show business and the arts. Redford founded the Redford Center to create films to inspire action on issues like clean energy and made a series of anti-fracking ads for New York-based Catskill Citizens for Safe Energy. And promoting fracking in this shale-rich state where its health and safety impacts are starting to emerge seems to lurk behind these highway messages.

Will Fracking Go Bust in Pennsylvania?

The climate crisis already has a death toll, and it will get worse if we don't act to reduce emissions.

'Stop the Plunder and Start the Healing,' UN Chief Urges in State of the Planet Speech

Independent Media Institute
Insights + Opinion
The miserable ones: Young broiler chickens at a feeder. The poor treatment of the chickens within its supply chain has made Tyson the target of public campaigns urging the company to make meaningful changes. U.S. Department of Agriculture / Flickr

The actions of the U.S. meat industry throughout the pandemic have brought to light the true corruption and waste that are inherent within our food system. Despite a new wave of rising COVID-19 cases, the U.S. Department of Agriculture recently submitted a proposal to further increase "the maximum slaughter line speed by 25 percent," which was already far too fast and highly dangerous. It has been made evident that the industry will exploit its workers and animals all to boost its profit.