Bill Nye's Thoughts on Trump and Climate, Encourages Deniers to Leave the Dark Side 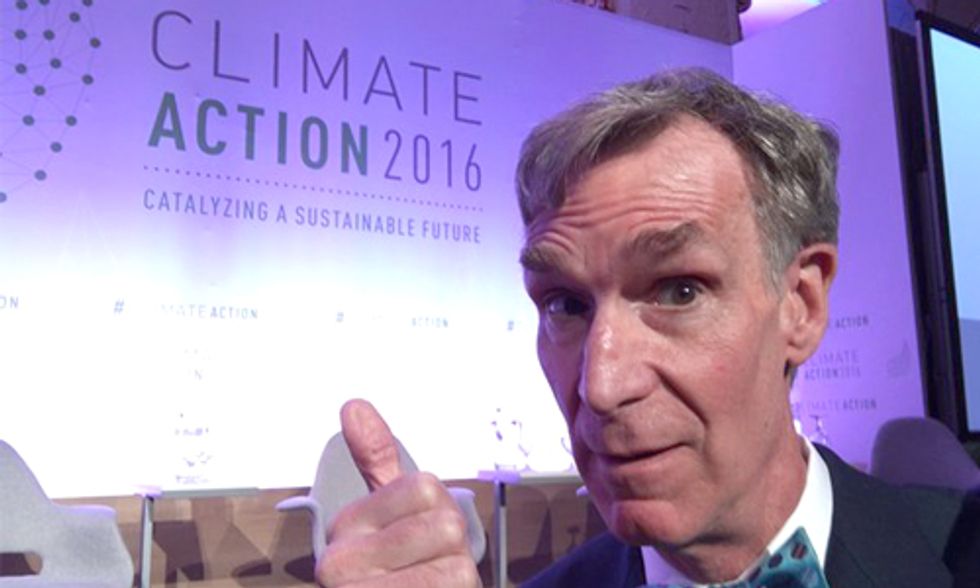 Every once in a while we get to leave the dark and dank depths of the deniersphere to experience the light of day. This was the case last Friday, when we saw the beloved Bill Nye at the Climate Action Summit. Our favorite science guy talked about all things climate, including his recent climate denial beef with our least favorite non-science guy, Marc Morano.

Bill Nye at the Climate Action Summit 2016 in Washington, DC.

During the near-hour long NowThis chat, the interviewer was curious about denial and asked Nye a few questions on it. Nye discussed Heritage Foundation and others that have been funded by fossil fuel companies to “introduce doubt” about the science. Apparently he’s now taking a new approach to his science education—instead of talking about the “settled science” he’s out to “debunk the denial” that has been “too successful.” He’s taking this approach through until November, because “the U.S. president has so much influence.”

Apparently he's going to be dipping his toe into the political conversation, somewhat new ground for the Science Guy. He suggests that after the Republican National Convention, Donald Trump will likely change his mind on climate since denial is such a losing position among the general public. Although Nye did quickly qualify the prediction, noting that given the "crazy things” Trump says, Nye wouldn’t be surprised if he stuck with the conspiracy theories (which he later describes as being “lazy” thinking).

Always magnanimous, Nye offered an olive branch to deniers who might be tempted to leave the dark side. Just as former smokers are some of the most fervent anti-tobacco advocates, former deniers could be the strongest voices for climate action.

Nye talked about an optimistic future, where everyone has clean water, ample energy and access to information. When challenged that this was “lofty,” Nye responded with a favorite quote to defend the importance of big ideas: "If we play to win by one run, we're going to lose by one run.” He then continued, mixing his sports metaphors and saying we need to skate deniers off the ice.

While mixed metaphors reinforced the stereotype that nerds don’t know sports, at least he didn’t call it a "basketball ring."