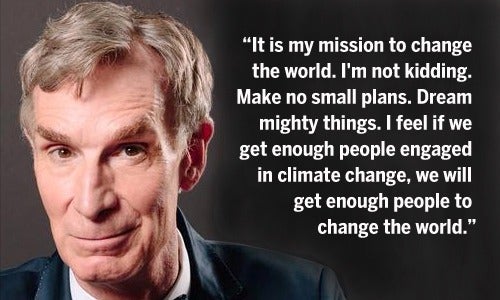 Bill Nye’s latest book Unstoppable: Harnessing Science to Change the World, came out earlier this week. To talk about the book with Nye, Lynn Elber of the Associated Press took a spin around New York City with Nye in a Tesla. Nye’s book is a plea with today’s generation to take immediate action on climate change.

There are five main takeaways from Elber’s interview with Nye:

1. Talk about the issue: “The best thing any of us in the developed world, especially in the United States, can be doing is talking about it,” said Nye. A recent AP poll showed a majority of people accept that the climate is changing, and humans are playing a role. And yet, fewer than one in four Americans are extremely or very worried about it. Unfortunately, climate change has become “so political and divisive,” lamented Nye, and “people have a tendency to give up and see it as overwhelming.” But he says it doesn’t have to be this way, which takes us to his next point.

2. Be Optimistic: Climate advocates get a bad wrap for being doomsayers, but Nye remains positive. “The world’s going to change climatically,” Nye admitted. “We just want to control the change. We want to have a high quality of life for billions of people as we pass through this era.”

3. Be Bold: Nye said it’s his “mission to change the world,” and he wasn’t joking either. “Make no small plans. Dream mighty things,” he said. “I feel if we get enough people engaged in climate change, we will get enough people to change the world. We will revolutionize the way we produce electricity and provide clean water to people. And along with this … is educating more women and girls,” said Nye.

4. Climate Deniers Beware: Millennials “overwhelmingly” support climate action, said Nye. He recently visited college campuses in politically conservative states, such as Alabama, Tennessee and Texas, and found students passionate about climate issues. Millennials will vote for candidates who are serious about addressing climate change, says Nye, though he was quick to admit that “gerrymandering and the money that’s in politics” have made it “hard for climate change-denying legislators to get voted out.”

5. Be Unstoppable: There’s a reason he calls his book “Unstoppable.” He is urging everyone to #BeUnstoppable. He believes that the youth generation can and must undergo a World War II-like mobilization to be an unstoppable force to create a better future. As for the impending criticism from his book, Nye said, “bring it on.”