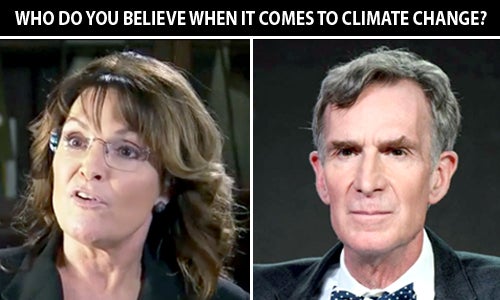 Last week provided a beautiful series of examples of the increasingly amusing ways that deniers are being handled.

It all began with a post on DeSmogBlog that featured an exclusive clip of a discussion between beloved educational icon Bill Nye the Science Guy and his polar opposite, misinformation expert Marc Morano. In the clip, Nye offers Morano a pair of $10,000 bets: that 2016 will be among the hottest on record and that this decade will be record hot. Morano, of course, turned down the bets on the basis that it’s “obvious” that scientific data will show warming, implying that the data would be doctored.

In the video (below), which has more than 100,000 views since April 12, Nye takes a calm approach to Morano’s typical rapid-fire spewing of pseudoscience, leaving Morano flustered and dejected. By preventing Morano from dominating the conversation and framing his argument in terms of future generations, Nye showed how to set a professional denier on his heels.

Bill Nye shared the DeSmogBlog post on his Facebook feed, which unsurprisingly triggered a flood of denier responses. In response to various conspiratorial accusations, none other than the National Aeronautics and Space Administration (NASA) stepped up to respond, with short but smart rebuttals amusing enough to warrant their own news coverage. Using simple language backed up by credible sources, NASA demonstrated how to deal with trolls—by showing others how plainly wrong they are.

But wait, there’s more! The Nye-Morano meet-up was made a central part of Morano’s attempt to publicize his movie Climate Hustle, which had its U.S. premier on Thursday night. The movie is described by IFLScience as “a propaganda movie for climate deniers.”

A clip of Nye and Morano’s conversation was shown as part of a panel event promoting the movie that featured Sarah Palin, who took aim at Nye by claiming that she’s just as much of a scientist as Nye.

As The Guardian’s Suzanne Goldenberg noted in her must-read article about it, “that was not even the low point of the event.” Along with ample quoting of Palin’s rambling comments, Goldenberg adds appropriate facts to her reporting to make it clear that “there was a strong whiff of desperation to Palin’s efforts” as, while much of the GOP remains mired in denial, “the world is moving on.” 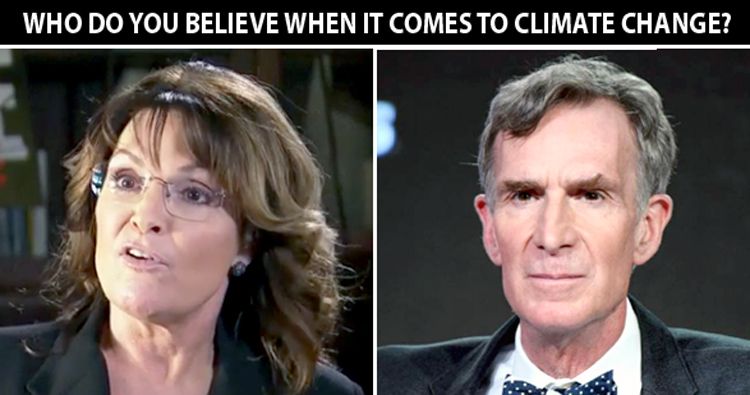 In other words, even nearly 20 years after his show went off the air, Bill Nye is still a great educator and entertainer. Maybe a reboot is in order: Bill Nye, The Climate Science Guy!