Bill Nye: Solar-Powered Desalination ‘Could Be Key to the Future’ 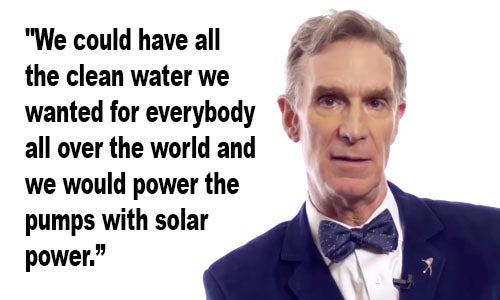 Desalinating seawater has been hailed as the solution to addressing freshwater scarcity, but the technology has yet to be scaled. Big Think, which bills itself as a “knowledge forum,” hosts a series, Tuesdays With Bill Nye, where viewers ask Nye questions about a range of popular topics. This Tuesday, Nye answered a question from a young girl in Minnesota who wanted to know if we can desalinate water for human consumption on a massive scale. 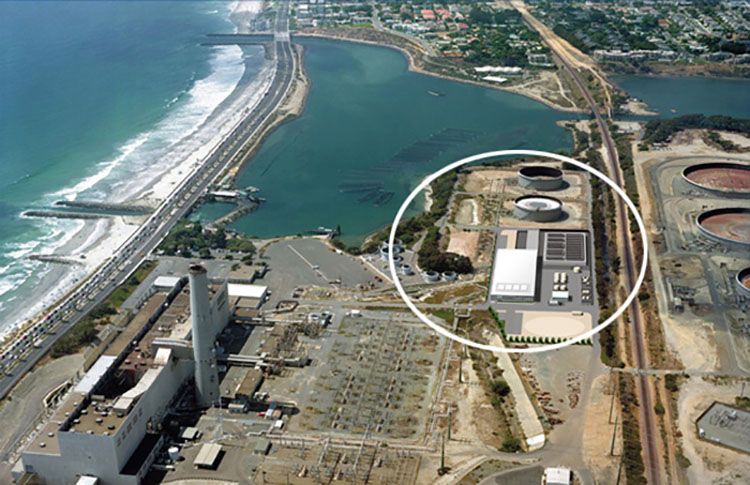 “Desalination of water could be the key to the future for so many of us humans,” Nye said, explaining how desalination plants utilize reverse osmosis to remove salt from seawater. Researchers are in the process of developing new technologies right now, he continued.

Many places around the world already use the technology, Nye noted. “This is done all the time. It’s done in Australia at several industrial-scale, citywide installations … Carlsbad, California has one. And cruise chips and I guess the U.S. Navy exploit this technology all the time,” Nye said.

So, he’s very optimistic that we “are living at a time where this breakthrough may be made on an industrial scale,” and he believes it could even be powered by renewables.

“We could have all the clean water we wanted for everybody all over the world and we would power the pumps with solar power, regular old photovoltaic solar cells, and when the sun is not shining you don’t pump the water,” Nye explained.

“So you pump the water when the sun is shining and and you fill up reservoirs all over the world. And so humankind could—if this stuff works out—it could have access to clean water for the billions of us that need it.”

Critics argue the technology is too expensive and too energy-intensive to be adopted on a massive scale. Take, for example, the Carlsbad, California desalination plant that Nye mentioned. The plant, which came online at the end of last year, is the largest in the Western Hemisphere.

But the water from the plant “costs 80 percent more than San Diego pays for water outside the county, and even though the plant is huge, it can only meet 10 percent of San Diego’s needs,” Julian Huguet from Discovery News explained. “And it will use a lot energy … making it more a small puzzle piece than the ultimate solution to California’s drought.”

Worldwide, there are already an estimated 15,000–20,000 desalination plants producing more than 20,000 cubic meters of water per day. Places as varied as Aruba, Chile and Algeria all use desalination.

Israel already supplies 40 percent of its drinking water from desalination. That number is projected to climb to 70 percent by 2050.

Forward-thinking companies are working on solar-powered desalination plants. French engineering company Mascara is developing a desalination plant that is powered by off-grid, rooftop solar in Abu Dhabi in the United Arab Emirates.

The plant is the fifth desalination demonstration project from Masdar, which is currently running a pilot program to test renewably powered desalination plants in the United Arab Emirates. The group hopes to have a facility at commercial scale by 2020.

Developers in Saudi Arabia are currently building the world’s first utility scale, solar-powered desalination plant, which is projected to be online by early 2017. And Monsson Group announced last week it will launch a fully automated and remote controlled desalination plant powered by renewables in Qatar.