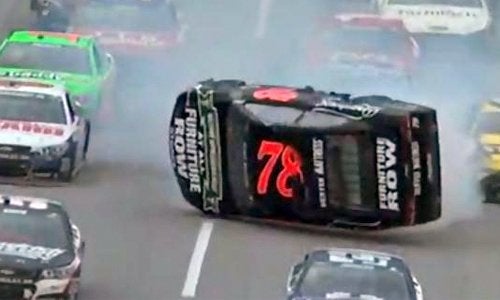 Bill Nye‘s latest book, Unstoppable: Harnessing Science to Change the World, was published last week. To promote his book, Nye was interviewed by the Associated Press while driving a Tesla around New York City.

As an outspoken supporter of green technology, Nye’s critique of NASCAR in Unstoppable was not surprising, but sparked significant controversy. While he admitted watching a NASCAR race on TV with his family is “exciting,” he wrote that the technology behind it is “depressing.”

“I get it. I understand the appeal of a stock car race. It’s just exciting, and I’m all for it. I just want NASCAR to adapt to the new mainstream. I want the circuit to produce vehicles that could compete in races anywhere in the world, and win. I want the racing series to spin off new tech that will do more with less. For me, as an American mechanical engineer, I hope NASCAR decides to look forward rather than backward.”

Critics like Auto Action take issue with Nye’s ideas. They say that while focusing on NASCAR, Nye is ignoring other auto racing competitions, such as Formula E, which uses only electric cars, the World Endurance Championship and Formula 1. These international leagues are “leading the charge in innovation in regards to electric engines, hybrid systems and fuel efficiency respectively,” Auto Action said. For instance, Formula 1 uses a turbocharged 1.6-litre V6 that has an Energy Recovery System that tries to conserve and re-use heat energy from places like the brakes and exhaust.

As for NASCAR, Chris Matyszczyk of CNET’s Technically Incorrect doesn’t see NASCAR fans supporting changes. “Has he seen how Nascar drivers drive? Has he witnessed their untrammeled aggression?,” Matyszczyk wrote. “This is what America wants—or at least a considerable part of America. It doesn’t want namby-pambiness. It doesn’t want to see their heroes in glorified Priuses. Some think that global warming is the same as central heating.”

Only time will tell. In the meantime, don’t try to paint Nye as anti-NASCAR. Remember, the Science Guy says he’s “all for it.” The engineer in him just wants to see NASCAR drive fast into the future.