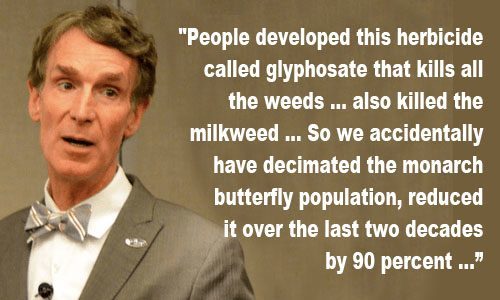 Bill Nye is back with part two of his radio appearance, where he and co-host Chuck Nice delve even deeper into the Science Guy’s controversial flip-flop on genetically modified organisms (GMOs).

You can listen to the StarTalk podcast below where Nye points out some of the “unintentional consequences” of GMOs, such as the widespread decimation of the monarch butterfly due to the use of herbicides, as well as the threat of monocultures to pollinators such as the honeybee.

Here’s what they talked about in the second part of Nye’s appearance:

“People developed this herbicide called glyphosate that kills all the weeds, and kills all of everything except the plants that have this cool gene in them that allows them to grow right through it. We also killed the milkweed, and the milkweed is what the monarch butterflies rely on. So we accidentally have decimated the monarch butterfly population, reduced it over the last two decades by 90 percent … We don’t want that where you are accidentally wiping out a potential pollinator species.” 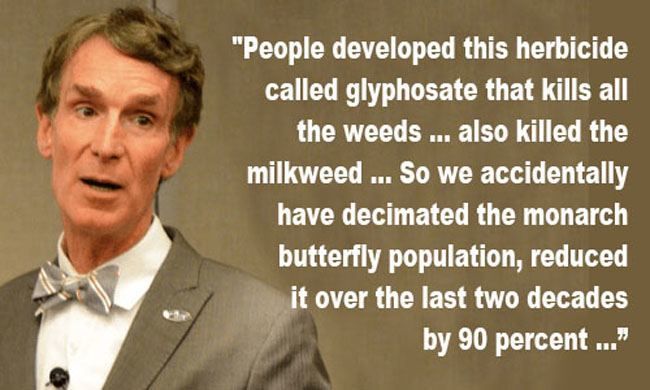 “This is the concern of certain organic farmers, that these seeds end up in their soil and they get contaminated. [But] if you’re not planting them on purpose, there’s just not that much contamination. And the infamous cases, where when people claim they got canola growing that flew into their fields accidentally and started growing, there’s substantial evidence that those cultivars were carefully cultivated. That is to say, one guy claimed that these seeds flew into his field, but they really didn’t—he really planted them.”