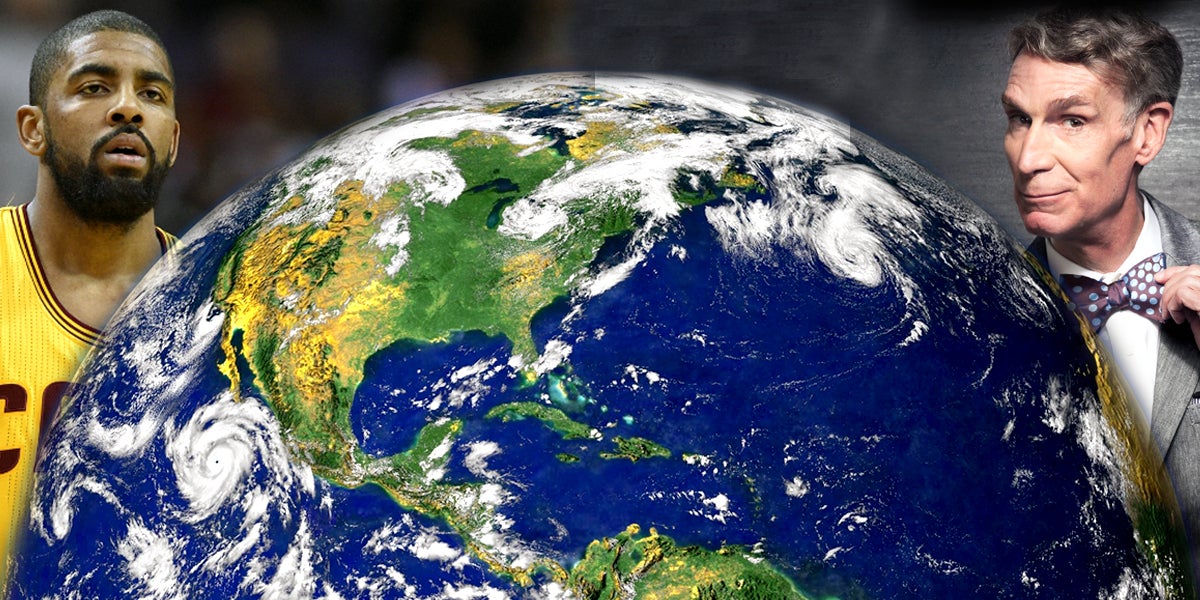 It all started when the Cleveland Cavaliers point guard appeared on a recent “Road Trippin’ with RJ and Channing” podcast hosted by teammates Richard Jefferson and Channing Frye and discussed conspiracy theories.

“For what I’ve known for as many years and what I’ve come to believe, what I’ve been taught, is that the Earth is round,” he continued. “But if you really think about it from a landscape of the way we travel, the way we move, and the fact that—can you really think of us rotating around the sun and all planets aligned, rotating in specific dates, being perpendicular with what’s going on with these planets?”

He seemed to double down on these claims in a later interview with Sports Illustrated. Even when the All Star athlete was asked if he’s seen photos of our round Blue Marble, Irving responded, “I’ve seen a lot of things that my education system said was real that turned out to be completely fake.”

Kyrie Irving was trending on Twitter today because he believes the Earth is flat. I asked him about it. pic.twitter.com/ODe9aP9qmK

But “The Science Guy” wasn’t having any of it.

“It’s really concerning when you have people in the public eye—or people in general—who think the Earth might not be round,” Nye told Sports Illustrated. “It’s really an extraordinary thing.”

He remarked that a host of scientific technologies depend on our very round planet.

“We have spacecrafts, we all depend on weather reports. We’ve got mobile phones, we’re talking on electric computer machines right now,” Nye said. “So to have people that eschew or don’t accept or don’t embrace this method, this process that brought us all this remarkable technology … all this is through this process of science.”

“And so it’s heartbreaking when we have people that even joke about it,” he concluded.

Nye’s dose of science fact is especially necessary during these fraught times. As any EcoWatch reader knows, many people who control the U.S. government are about as anti-science as it gets.

Luckily, Nye will soon make his long-awaited return to our screens with his new Netflix show, Bill Nye Saves the World, which has a premiere date of April 21.

Each episode will explore some of the most complex scientific topics of the day, from climate change, vaccines and genetically modified organisms (GMOs). Nye and his band of correspondents aim to bust myths and refute anti-scientific claims that may be espoused by politicians, religious leaders or titans of industry, according to its IMBD description.

Irving’s Flat Earth beliefs have been lighting up news outlets and social media this week. However, he seems to have since slightly backtracked on his position.

In the video below, Irving appears around the 1:45 mark saying that Earth being flat is “scientifically impossible” and that the media has politicized his beliefs.