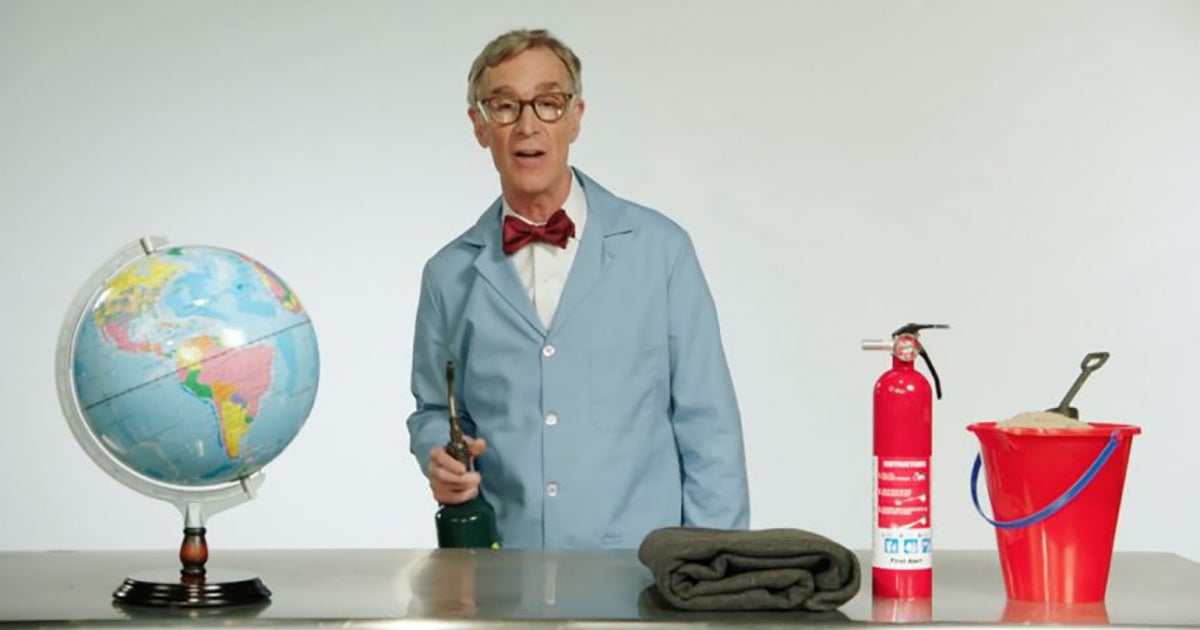 Bill Nye the Science Guy has lost his cool when it comes to climate change.

In a segment on John Oliver’s Last Week Tonight Sunday, the beloved science communicator riffed on the set-up of the PBS series that made him famous. Donning a lab coat and safety glasses, he proceeded to school the audience on global warming, but this time he used some very adult language.

“By the end of this century, if emissions keep rising, the average temperature on Earth could go up another four to eight degrees,” Nye said, as CNN reported. “What I’m saying is the planet’s on f***ing fire.”

Nye then proceeded to light a globe on fire with a blow torch.

“There are a lot of things we could do to put it out—are any of them free? No, of course not. Nothing’s free, you idiots. Grow the f**k up. You’re not children anymore. I didn’t mind explaining photosynthesis to you when you were 12. But you’re adults now, and this is an actually crisis, got it? Safety glasses off, motherf***ers,” he added.

Global warming is so bad that it now has Bill Nye the Science Guy cursing us out to fix it.

"What I'm saying is the planet is on fucking fire!" 🔥🔥🔥🔥
pic.twitter.com/Tdil4IugAl

Nye appeared to endorse the deal in his segment, The Washington Post reported. He has also previously expressed support for Ocasio-Cortez, showing up to ask a question at her South by Southwest talk in March.

“AOC gets it,” he tweeted at the time.

“When we release carbon, say, by burning coal or driving an SUV, all of us pay for that in the form of things like fires, floods and crop failures,” he added. “Putting a fee on carbon creates incentives to emit less carbon, and, more importantly, it also incentivizes the development of low-carbon technology, which is huge, because that’s vital to reducing emissions globally. And because for some reason, John, you’re a 42-year-old man who needs his attention sustained by tricks, here’s some f***ing Mentos and a bottle of Diet Coke. Happy now?”

Some viewers were shocked by Nye’s tone.

“I just heard Bill Nye swear and it’s blowing my mind,” one viewer tweeted, as The Washington Post reported.

Oliver also referenced Nye’s language in a thank you tweet the next day.

“Many thanks to the fantastic Bill Nye for explaining Carbon Pricing to us with an entirely appropriate amount of profanity,” he wrote.

Many thanks to the fantastic @BillNye for explaining Carbon Pricing to us with an entirely appropriate amount of profanity.

This isn’t the first time that Nye has used his platform to bring attention to climate change. In a 2018 interview with Canadian Prime Minister Justin Trudeau, for example, he questioned the leader about his approval of the Trans Mountain pipeline expansion. A 2017 documentary focused on Nye’s more recent efforts to promote science, including spreading accurate information about the threat posed by global warming.

“Nowadays, I’m talking to adults,” he said in the trailer, “and I’m not mincing words. Climate is changing, it’s our fault, we got to get to work on this.”