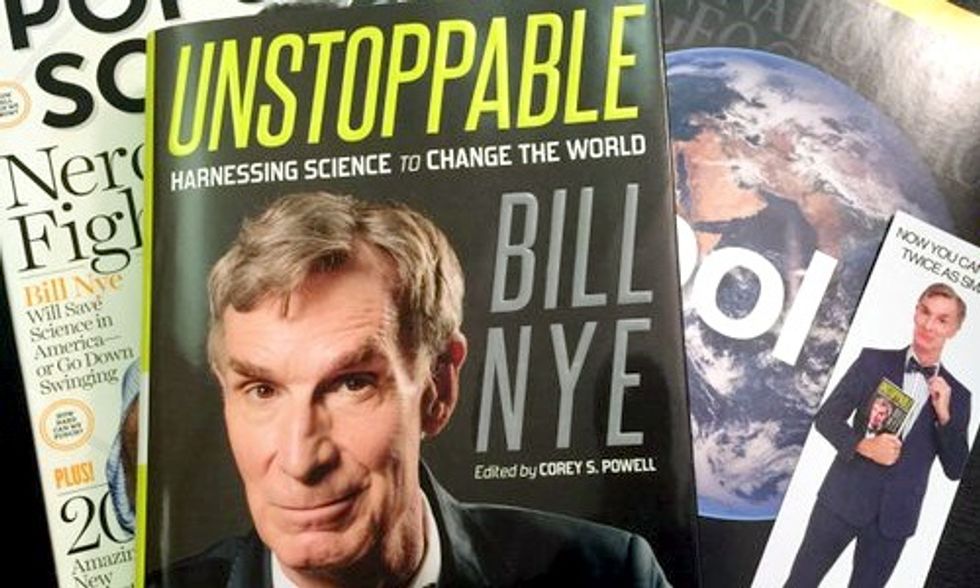 In a new interview, Bill Nye has once again spoken out against climate deniers, calling them "absolutely toxic" and demolishing their favorite, do-nothing "I am not a scientist" excuse.

The former Bill Nye the Science Guy host shared these thoughts while speaking to Salon about his new book, Unstoppable: Harnessing Science to Change the World. The book, out Nov. 10, pleads with today's generation to take immediate action on climate change.

During the interview, Nye explained to staff writer Sean Illing that the goal of his new book is to "change the world!":

"Really, that’s what I’m trying to do. Obviously, this book isn’t going to change the world, but it is part of the bigger idea that we all have to think optimistically about this. We’ve got to go into this knowing we have a hard challenge but that we’re going to win this fight, and we’re going to save the Earth for humanity."

However, Nye said that there are big obstacles—namely the GOP climate deniers—that stand in the way of positive change for the environment:

"Part of the solution to this problem or this set of problems associated with climate change is getting the deniers out of our discourse. You know, we can’t have these people—they’re absolutely toxic. And so part of the message in this book is to get the deniers out of the picture, and along that line—I’ve been saying this a lot the last few weeks as I listen to the Republican debates—maybe one of these people will go out on his or her own, thinking for him or herself, and say, 'You know, I’ve been thinking about this and climate change is a very serious problem. So if I’m president, we’re going to address climate change.'"

When asked why there are misunderstandings about climate change, Nye pointed out that even though 97 percent of climate experts agree human activity causes global warming, it's that tiny percentage of wiggle room that skeptics like to pounce on:

"Well, there’s no question. The biggest myth is that scientific uncertainty, plus or minus so many percent, is the same as doubt about the whole thing. And that’s wrong; that’s patently wrong. And that’s a dangerous confusion. This is one of the big reasons I wrote the book."

But if we continue to talk about it, things will get done. If you want to make a difference, these next few months and the election in general have the potential to become a huge turning point. Not just for the U.S., but for humankind."