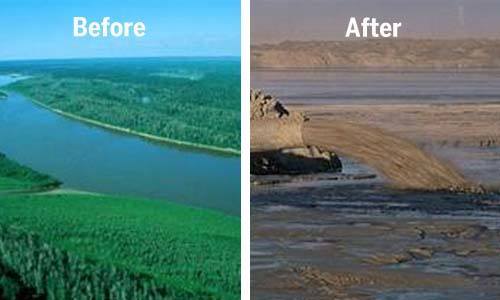 Bill Nye recently took a trip north to the Alberta tar sands while filming his new science documentary and he did not mince words about the state of Canada’s crude oil reservoir.

Thank you @BillNye & National Geographic for coming to see the #tarsands & its impacts and talk about #climatechange pic.twitter.com/2jjuzabsAm

“From an environmental point of view locally, it’s astonishing and overwhelming,” he said.

After taking an aerial tour, Nye added that the sight of the oil sands was “depressive.”

The Alberta tar sands is one of the largest bitumen (extremely heavy crude oil) reserves in the world, as well as one of the largest source sites of carbon pollution on the planet. (In case you didn’t know, the proposed Keystone XL pipeline would transport this toxic muck right through the U.S., from Alberta to refineries in Texas.)

During his trip Nye visited Fort McKay First Nation, a community that’s been choked by the damaging effects of the mining operations.

The Alberta tar sands. Before and after. Please share…. pic.twitter.com/vuOz5j4eDO #uppers

“The Science Guy” told APTN he was “amazed” by the size of the tar sands production and commented on its wreckage to surrounding ecosystems.

“Furthermore, consider all the toxins that are being used to move the fluid around and then they put in these enormous ponds, or lakes, or encampments,” Nye said. “It’s very much out of nature’s natural state.”

He added, “I think anybody would say that First Nations have rights that have been abridged or catastrophically curtailed.”

Nye told the network about how the upcoming Canadian federal election and the possible ousting of Canadian Prime Minster Stephen Harper could spell hope for the environment. “Everybody is talking about the very strong possibility” that the Harper government will be voted out, Nye said.

“Everybody says they feel like the tipping point’s been reached,” he continued. “Everyone we speak with, where enough is enough kind of thing. But then you have people that are in denial of climate change, who justify all of this extraordinary exploitation to the environment. It’s amazing the scale of it, is just very hard to believe and very troubling.”

Nye has spoken out about the tar sands and the Canadian Conservative Leader before. “The government in Canada is currently being influenced by the fossil-fuel industry,” he told VICE last year. “Stephen Harper is a controversial guy in the science community because [of] the policies, especially in Western Canada.”

4 Arrested Blockading the U.S. First Tarsands Mine in Utah