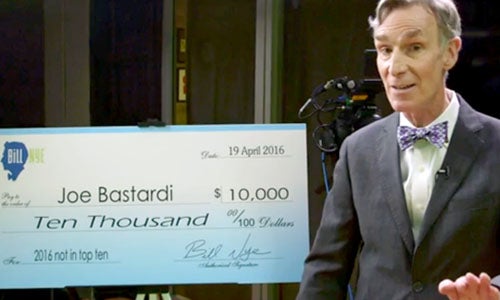 As you may know, I am very concerned about global warming and global climate change. The science of global warming is long settled, and one may wonder why the U.S., nominally the most technologically advanced country in the world, is not the world leader in addressing the threats enumerated by the U.S. military, the United Nations’ Intergovernmental Panel on Climate Change (IPCC), and others. I hope people will take the facts we face into account as they head to the polls this year. 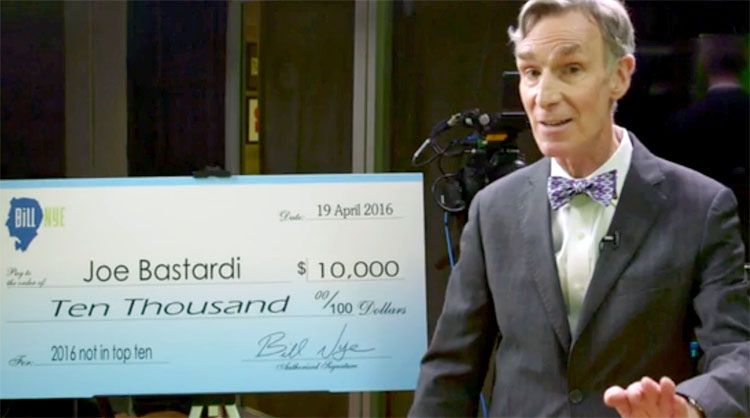 The ocean is warming and expanding. This effect alone will displace millions of people. The effects on agriculture, water supplies, and weather patterns will create a great many problems for a great many of us. By my reckoning, our delay and the reluctance of conservative presidential candidates to embrace the problem and discuss it is a result of the diligent effort of a handful of climate change deniers. They have been especially successful at introducing the idea that routine predictive uncertainty, e.g. plus or minus two percent, is somehow the same as plus or minus one hundred percent. It isn’t, and the deniers are wrong.

Since the presentation of the facts and science concerning global warming and climate change have been heretofore insufficient to motivate enough of us voters, I am now challenging the deniers directly. By showing enough people the techniques and ignorance of the deniers, I believe we can make warming and climate change a campaign issue, which will swing the upcoming U.S. presidential election in favor of a candidate who is not out of touch with our worldwide climate situation.

Both Marc Morano and Joe Bastardi are well-known climate change deniers (Mr. Morano said once that he prefers the term “extreme doubter”). In an opinion piece in the unusual Patriot Post online publication, Mr. Bastardi insisted that there is nothing unusual going on in our Earth’s atmosphere and oceans. In time for Earth Day, I issued a video challenge that was published on The Huffington Post. I offered and still offer to bet Mr. Bastardi $10,000 that this year 2016 will be among the top 10 warmest years on record. I offer him another $10,000 that the decade 2010-2020 will prove to be the warmest on record. Mr. Bastardi wrote a second piece in which he re-stated his belief that carbon dioxide has little effect on global temperatures. Incidentally, despite publishing a “midday digest” every day, no one at the Patriot Post has responded to my enquiries.

Carbon dioxide has an enormous effect on planetary temperatures. Climate change was discovered in recent times by comparing the Earth to the planet Venus. When Mr. Bastardi and I appeared on the Bill O’Reilly show six years ago, Mr. Bastardi said, “[He doesn’t] believe we have the proper measurements of Venus from over 10 billion years ago. So [he] can’t tell the relationship with Earth.” In planetary science we can tell several important things. Venus is extremely hot because of the greenhouse effect (and it’s far less than 10 billion years old). The Earth is warm enough to have liquid water, because of the same greenhouse effect. I remind you that Mr. Bastardi’s apparent belief that carbon dioxide has nothing to do with the Earth’s global temperatures is absolutely wrong.

Incidentally neither Mr. Bastardi Mr. Morano would take either wager I offered. They both admit the world is getting warmer fast. Mr. Morano just said no, he would not take the bets. In complementary fashion, Mr. Bastardi did not address my offers. Instead, he proposed a new wager based on changes that may or may not occur over a single year. You may have seen his article from November 2015 in which he includes two graphs of the world’s temperature over time. I believe anyone able to think critically can see that the graphs and data Mr. Bastardi’s cited in this previous article are irrelevant. In his first graph, the four and half billion-year time scale is too long to reckon temperature changes over the last two and half centuries. In his second graph, the timescale is too short to accurately depict the overall rate of global temperature change. He has hidden or masked the phenomenon of global warming and climate change from the readers, or perhaps even from himself.

Mr. Bastardi suggested that I’ve been brainwashed and that I am irrational. While such claims may or may not be true, rather than address my proposed wager he changed the subject several times. Among the adjacent subjects he included were: nuclear energy, Middle East oil, creationist Roy Spencer’s satellite measurements, veterans’ health benefits, money used to study whether the Earth is flat or round, professors improving fusion [reactor] output, no use of fossil fuels for a year and television commercials for satellite dish service.

Contrary to Mr. Bastardi’s statement, carbon dioxide certainly does affect the Earth’s climate in a big way. I hope you will consider both Mr. Morano’s and Mr. Bastardi’s tendency to change the subject along with their misjudgment, or apparent misjudgment, of atmospheric and planetary science as you head to the polls this year.